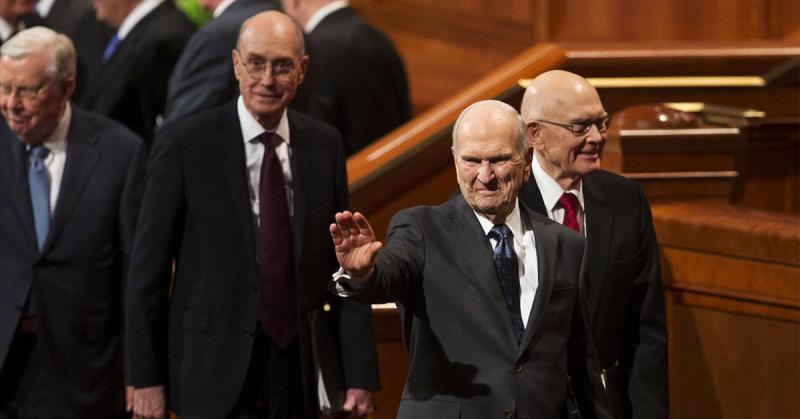 As recorded in Acts 10–15, the leaders of the church of Jesus Christ shepherded early saints through tumultuous times. These chapters highlight how the early apostles faced such challenges as social upheaval, martyrdom and persecution, organizing missionary work, and “much disputing” among the leadership of the church that arose over unanswered doctrinal and procedural questions.

The threads tying these chapters together are questions such as: Who receives revelation for the church? What does that revelation look like? Whence does it arise? How might both external and internal forces catalyze revelation?

Looking carefully at two accounts from this block of Scripture helps answer these questions. The first is the account found in Acts 10. This narrative begins by describing a man named Cornelius. A “devout man, and one that feared God with all his house” (Acts 10:2), Cornelius was a Roman military commander; in other words, a Gentile. Based on the description given in the text (vv. 2, 22), Cornelius may indeed have been a God-fearer–––a sympathizer to the Jewish faith who remained uncircumcised and therefore not fully converted–––but he was a Gentile all the same.1

Cornelius was instructed in a vision to “send men to Joppa, and call for one Simon, whose surname is Peter” in order be instructed on how to fully convert to the gospel of Jesus Christ (Acts 10:5). As Cornelius’ servants made their way to Joppa, the text describes how Peter “became very hungry . . . [and] fell into a trance” or vision (v. 10). In this vision, Peter

saw heaven opened, and a certain vessel descending unto him, as it had been a great sheet knit at the four corners, and let down to the earth: Wherein were all manner of fourfooted beasts of the earth, and wild beasts, and creeping things, and fowls of the air. And there came a voice to him, Rise, Peter; kill, and eat. But Peter said, Not so, Lord; for I have never eaten any thing that is common or unclean. And the voice spake unto him again the second time, What God hath cleansed, that call not thou common. This was done thrice: and the vessel was received up again into heaven. (vv. 11­–16)

While Peter was left wondering what this vision meant, Cornelius’ servants arrived and inquired for the apostle (Acts 10:17–18). After Peter consulted with Cornelius’ servants, the Spirit made known to Peter the meaning of the vision and prompted him to visit Cornelius (vv. 19–33). This Peter did, hearing Cornelius’ account of his vision. Once he had a more complete understanding of the situation, Peter came to perceive “of a truth . . . that God is no respecter of persons: But in every nation he that feareth him, and worketh righteousness, is accepted with him” (vv. 34–35).

The result of all this? “While Peter yet spake these words, the Holy Ghost fell on all them which heard the word. And they of the circumcision which believed were astonished, as many as came with Peter, because that on the Gentiles also was poured out the gift of the Holy Ghost” (Acts 10:44–45). This heralded the epoch when the gospel would be taken to allnations, kindred, tongues, and peoples.

The second account in Acts 15 describes an occasion not long after the conversion of Cornelius when “much disputing” arose amongst “the apostles and elders” of the church (Acts 15:6–7). The problem? Now that there were Gentile converts in the church, “there rose up certain of the sect of the Pharisees which believed, saying, That it was needful to circumcise them [i.e. the new Gentile converts], and to command them to keep the law of Moses” (v. 5). The named leaders in attendance at this council in Jerusalem included Paul and Barnabas, Peter, and James the brother of Jesus. After some discussion, and after searching the scriptures (vv. 15–17 = Amos 9:11–12), the council determined that Gentile converts need not be circumcised, but should persist in following certain Jewish laws pertaining to food and sexual impropriety (vv. 19–20, 28–29).

It should be noted that the KJV translation is somewhat misleading with its depiction of “much disputing” (Acts 15:7) arising among the apostles. The word doesn’t necessarily mean that they were contentious yelling and arguing. Rather, it means the apostles were diligently seeking, discussing, debating, and exploring options. The Greek word here is zētēseōs, and can mean broadly investigation, discussion, or inquiry. It derives from zēteō which means to seek, look for, search out, examine, strive for, etc. While we might imagine the apostles and elders of the council voicing opposing strong opinions during this zētēseōs, we need not necessarily assume they were contentious or spiteful towards each other in this process.

The clear parallels between what is depicted here in Acts 10 and 15 and incidents from the modern history of The Church of Jesus Christ of Latter-day Saints are abundant. In the late summer of 1830, the Prophet Joseph Smith was forced to confront Hiram Page, one of the Eight Witnesses of the Book of Mormon, who was presuming to receive revelation on behalf of the Church by means of a seer stone.2 As a revelation the Prophet received in September 1830 made clear, only the president of the Church may act, as Peter did many centuries earlier, as the chief apostle overseeing the affairs of the Church as a whole (Doctrine and Covenants 28).

The history of the revelation on priesthood given to President Spencer W. Kimball in 1978 likewise echoes what is depicted in Acts 10 and 15. “Starting in the 1850s, the Church followed a policy that restricted black members’ access to full participation in the Church by declaring them ineligible to be ordained to the priesthood or receive temple ordinances.”3 As the restored gospel spread to Africa and other parts of the world, and as wider societal attitudes on issues of race shifted over time, Church leaders felt it was needful to revisit the Church’s policy of restricting priesthood ordination and temple blessings from men and women of African descent.

“By early 1978,” President Kimball was not only “regularly praying in the temple for revelation about extending priesthood ordination and temple blessings to black members of the Church,” he was also speaking “at length with his counselors in the First Presidency and with members of the Quorum of the Twelve Apostles on the subject,” was inviting “them to make it a matter of study and prayer” individually, and was carefully listening to the voices of black members of the Church who were impacted by this policy.4

This process resulted with a June 1, 1978 revelation that overturned the previous policy of the Church and lifted the racial restriction on priesthood ordination and temple blessings. This revelation is canonized today in the Church as Official Declaration 2.

Members of the Church of Jesus Christ today can read Acts 10–15 with full confidence that the Lord continues to guide His servants through revelation in the management of His Church and the teaching of His gospel.

2.See Jeffrey G. Cannon, “‘All Things Must Be Done in Order’,” in Revelations in Context, online at https://history.churchofjesuschrist.org/?lang=eng.

3.James Goldberg, “Witnessing the Faithfulness,” in Revelations in Context, online at https://history.churchofjesuschrist.org/?lang=eng.

How did Saint Paul know what to write to the Corinthian Church? Did he receive "revelation" from Heaven? There is a simple explanation: open the New Testament and read 1Corinthians chapter One verse eleven: "For it hath been declared unto me of you, my brethren,by them which are of the house of Chloe, that there are contentions among you." Today, the First Presidency, and the Quorum of the Twelve get reports from Stake and Mission Presidents, and others, as to the needs of a Global Church. I am not a Church Member; only an "Investigator" - however, it is obvious that a parallel situation exists in this 21st Century, as it did in the 1st Century.

In conclusion, please be assured that senior Church leaders who preside over the divinely appointed purposes of the Church receive divine assistance. This guidance comes from the Spirit and sometimes directly from the Savior. Both kinds of spiritual guidance are given. I am grateful to have received such assistance. ~ Quentin L Cook ; General Conference 2018 ; Prepare to meet God