How Are Rod and Sword Connected to the Word of God? | Meridian Magazine 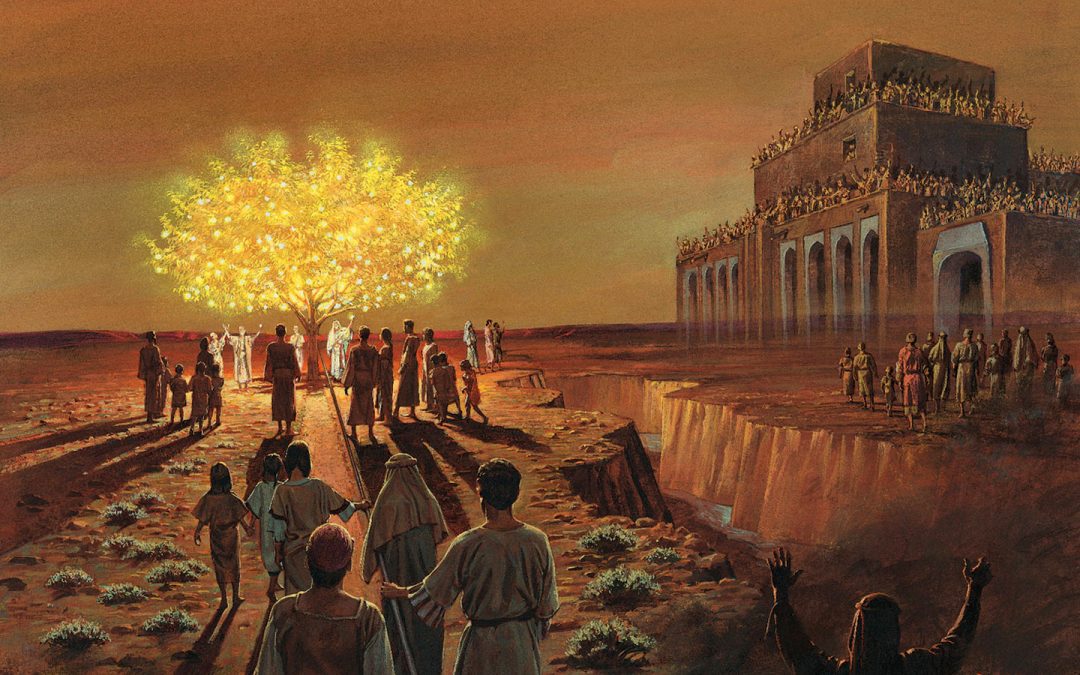 How Are Rod and Sword Connected to the Word of God?

“And it came to pass that I beheld that the rod of iron, which my father had seen, was the word of God.”

In Nephi’s vision of the Tree of Life, he beheld that the iron rod was a symbolic representation of the “word of God” (1 Nephi 11:25). In this same vision, however, we find that the word of God is symbolized by the “sword of the justice of the Eternal God” (1 Nephi 12:18; original manuscript),1which has the “brightness of a flaming fire” and divides “the wicked from the righteous” (1 Nephi 15:30).2

The fact that a number of biblical passages use similar symbolism—sometimes with both “rod” and “sword” together in the same verse—lends support to the dual symbolism found in the Book of Mormon.3 The book of Revelation, for example, speaks of Jesus Christ as the “Word of God” (Revelation 19:13) and then states that “out of his mouth goeth a sharp sword, that with it he should smite the nations: and he shall rule them with a rod of iron” (v. 15).4

Yet some may wonder why the word of God is being connected with a rod and a sword in the first place. One possible explanation may have to do with the dual function of each symbol. According to John A. Tvedtnes,

Anciently, the rod was used both for correction and for gentle guidance. This dual role came from the world of the shepherd as pastor and defender of the flock. … The shepherd’s rod was a weapon, normally a piece of wood with a knob at one end. With it, he could defend the flock from predators. It was also used to count the sheep at the day’s end (see Leviticus 27:32; Ezekiel 20:37). The staff was a long walking stick, sometimes with a crook at the top. It could also be used for handling sheep, including separating sheep and goats.5

In Nephi’s vision, the iron rod seems to function much like a shepherd’s staff—leading people to the Tree of Life just as a shepherd would use a “rod” (Psalm 23:4) to lead his sheep to “green pastures” and “still waters” (v. 2).6 However, Nephi later quoted Isaiah’s prophecy that the Lord “shall smite the earth with the rod of his mouth, and with the breath of his lips shall he slay the wicked” (2 Nephi 30:9; cf. Isaiah 11:4). Thus, the rod is used both as a symbol of loving guidance and of divine punishment in the Book of Mormon.7

As for the sword, its dualism is sometimes represented by its having “two edges” (Revelation 2:12).8 Hebrews 4:12 states that “the word of God is quick, and powerful, and sharper than any two-edged sword, piercing even to the dividing asunder of soul and spirit, and of the joints and marrow, and is a discerner of the thoughts and intents of the heart.”

Nephi captured a similar dualism when he described the “terrible gulf” in his father’s dream as the “sword of the justice of the Eternal God” (1 Nephi 12:18; original manuscript). When Laman and Lemuel said that Nephi had “declared unto us hard things,” Nephi responded by explaining the dual nature of God’s justice and truth: “I said unto them that I knew that I had spoken hard things against the wicked, according to the truth; and the righteous have I justified, and testified that they should be lifted up at the last day; wherefore, the guilty taketh the truth to be hard, for it cutteth them to the very center” (1 Nephi 16:2).9 In other words, God’s word—as represented by his flaming sword of justice—divides the wicked from the righteous by justifying the righteous and condemning the wicked.11

It is fascinating that the iron rod and the sword of justice—two dualistic symbols of the word of God—seem to be linked features in Lehi’s vision of the tree of life. God’s sword of justice was associated with a filthy river and an impassible flaming gulf, and the iron rod was extending along its bank (1 Nephi 8:19). In such close and parallel proximity, each feature reinforces the dual symbolism of the other, revealing various layers of truth about the word of God.

God’s word offers both guidance and firm correction (as symbolized by the rod), and the power of its truth penetrates and reveals the hearts of men, justifying the righteous and condemning the wicked (as symbolized by the sword). Also, as a flaming sword, the word of God causes the hearts of the righteous to burn with love and truth,12 while for the wicked it causes them to be in a “state of awful, fearful looking for the fiery indignation of the wrath of God” (Alma 40:14).13Understanding the contrasting nuances of these symbols can help us better understand and apply the various passages that use them.

As Tvedtnes concluded, “By comparing the word of God with a sword and a rod, the prophets have shown us that there is both strength and love in obedience to the Lord. With the word of the Lord, we can fight off sin and temptation as with a sword and nurture our families and ourselves as did ancient shepherds with the rod.”14

1.Instead of using “sword,” the 2013 LDS edition of the Book of Mormon has “word of the justice of the Eternal God” (emphasis added). However, the Critical Text Project has revealed that Oliver Cowdery mistook the sw in “sword” for a w when he made a copy (known as the printer’s manuscript) from the original manuscript. According to Royal Skousen, “There are no other examples of ‘the word of justice’ in the Book of Mormon, but there are seven other examples of ‘the sword of justice’.” Royal Skousen, Analysis of Textual Variants: Part 1: 1Nephi–2 Nephi 10 (Provo, UT: FARMS, 2014), 258. Thus, manuscript evidence and consistent usage both indicate that “word” should be “sword” in this verse.

7.Margret Barker has noted that this dual symbolism can also be seen in different translations of Psalm 2: “In the Bible, the rod of iron is mentioned four times as the rod of the Messiah. Each mention in the King James Version says the Messiah uses the rod to ‘break’ the nations (Psalm 2:9) or to ‘rule’ them (Revelation 2:27; 12:5; 19:15). The ancient Greek translation (the Septuagint) is significantly different; it understood the Hebrew word in Psalm 2:9 to mean ‘shepherd’ and it reads, ‘He will shepherd them with a rod of iron.’ The two Hebrew verbs for ‘break’ and ‘shepherd, pasture, tend, lead’ look very similar and in some forms are identical.” Margret Barker, “Joseph Smith and Preexilic Israelite Religion,” in The Worlds of Joseph Smith, ed. John W. Welch (Provo, UT: Brigham Young University, 2006), 76–77.

Nephi’s use of “cutteth” here is good evidence that he is referring back to the symbol of the “sword of the justice of the Eternal God” from his vision. Nephi explained to his brothers that the “awful gulf, which separated the wicked from the tree of life” (1 Nephi 15:28) was a symbol of the “justice of God [which] did also divide the wicked from the righteous; and the brightness thereof was like unto the brightness of a flaming fire” (1 Nephi 15:30).The flaming sword of justice which created an impassible gulf between the wicked and the righteous in Lehi’s dream seems to be clearly analogous to the “flaming sword” which separated Adam and Eve from the Tree of life (Genesis 3:24). This imagery is referred to several times in the Book of Mormon. See Alma 12:21; 42:2–3. For further connections between these symbols, see Corbin T. Volluz, “Lehi’s Dream of the Tree of Life: Springboard to Prophecy,” Journal of Book of Mormon Studies 2, no. 2 (1993): 34–35; David M. Calabro, “Lehi’s Dream and the Garden of Eden,” Interpreter: A Journal of Mormon Scripture 26 (2017): 272–274.
11.This concept of justice is rather different from our modern understanding, which hearkens more closely to the Egyptian symbolism of a set of scales weighing the heart—as if God’s judgment were a commercial transaction. For ancient Israel, justice was more about who was on the Lord’s side (see Joshua 24:15). Those not faithful to covenant obligations were divided or separated by divine justice from those who were faithful.
12.See Helaman 5:23–24, 44; 3 Nephi 11:3; Luke 24:32; Doctrine and Covenants 9:8.
13.Emphasis added. See also, Jacob 6:10; Mosiah 3:27; Moroni 9:5; Proverbs 6:27–28.
14.Tvedtnes, “Rod and Sword as the Word of God,” in Pressing Forward, 38.