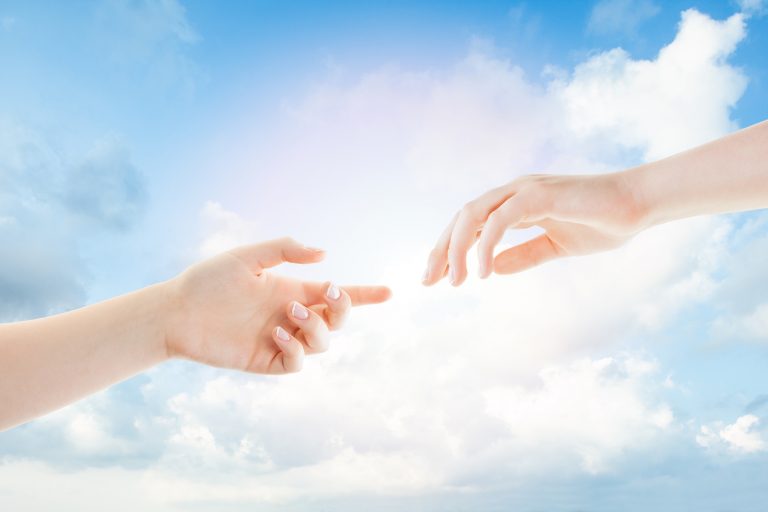 Has an angel ever helped you? The answer is yes! The thick veil surrounding us generally prevents any awareness of our cherished pre-mortal associations and their frequent aid to us, but there are times when the veil thins, and we become conscious of these loving beings helping us on our mortal journey.

“You Have to Go Through This”

Over 25 years ago, I was facing a set of circumstances that were overwhelming for me, and I remember praying my heart out for certain things to change.  At that point in time, I vividly recall sitting on the side of my bed quietly pondering. Suddenly, a man was standing at the foot of my bed who seemed to be in his mid-30’s with dark hair and bushy eyebrows.  As if he knew what I had been thinking and feeling, he spoke with great tenderness, saying:

“I’m SO sorry that you have to go through this, but this is something that is crucial for you to experience!”

Again, he compassionately echoed how sorry he was that I was suffering in this situation, and then, he was gone.

There I was still sitting on my bed, filled with amazement and wonder!  Even though it was a very peculiar interaction, I never felt alarm. His presence felt so natural, and almost familiar.  Even though he was there no more than a few seconds, I felt only love and concern from him, and gained the profound inner knowledge that difficult circumstances are often carefully orchestrated for us to go through for our personal growth and progression. I began to know that somehow everything would be ok, because I had those on the other side of the veil that would help me.

President Joseph F. Smith wrote a letter to his son, Hyrum, answering a poignant question that Hyrum had asked him while he was serving a mission.  The question was, “To what extent do our relatives and friends who have died have cognizance of us and our actions?” President Smith responded with profound understandings for his son and for all of us.  He wrote:

“Now, if our departed kindred and friends are just (righteous) spirits, exalted to this greater and more glorious work, they may be very near us,… observing actions of our thoughts, feelings, and actions, rejoicing because of our virtues and integrity to the truth, or sorrowing and weeping over our sins and transgressions. And not only so, but able to render assistance, when our spirits are susceptible to the power they wield….” (Hyrum M. Smith, From Prophet to Son: Advice of Joseph F. Smith to His Missionary Sons. 37-39, Italics added).

Turns out, my experience was not so unusual.  I have had many people share experiences with me where they were “susceptible to the power” that angels wield.  These angels come with concern and compassion to help in some way.  I’d like to tell a few of those experiences to you:

Kayetana Aguado tells how an angel saved both her life and that of her mother’s. She writes:

“My mom was in the hospital, going through a very long labor.  At one point she was alone in her room when she started having extreme pain and knew something was wrong but couldn’t reach the nurse call button.

“The nurse later told mom that she was just walking down the hall when she felt someone grip her upper arm, (leaving the imprint of a hand there), and pull her into my mom’s room to discover her distress. There wasn’t another person in the hall or the room at that time. Both my mother’s and my life were saved.” (Kayetana Aguado, Story used by permission)

Who was this angel? A long- lost friend or a family member?  When these experiences happen, we most often don’t know who it is, but eventually we will understand.

“God loves us.  He’s watching us, he wants us to succeed, and we’ll know    someday that he has not left one thing undone for the eternal welfare of each of us. If we only knew it, there are heavenly hosts pulling for us- friends in heaven that we can’t remember now, who yearn for our victory.”  (Ezra Taft Benson, “Jesus Christ–Gifts and Expectations,” 1974 Italics added)

Alice G. Bustamante had a similar traumatic event in her life that resulted in an angel intervening.  She wrote:

“I had my only child at age 33, over thirty years ago.  I had a c-section delivery and was left alone by my husband due to work. It was my third night alone at the hospital.  I was feeling unloved, and was in so much pain.  I could not move due to how swollen I still was, and the nurses would not answer my cries or beeps.  I remember crying out to the Lord to help me by sending someone to help me get up and go to the bathroom. It was in the wee hours of the morning when someone finally came in.

She was dressed in a nurse’s uniform, had red hair worn up in a bun, with the bluest eyes, and soft hands and voice.  She told me she was there to help me. She helped me get up, go to the bathroom, and get back to bed while murmuring endearments about how special I was.  I told her about pain in my back and she got some cream and massaged it. It felt heavenly!

“Later, I asked a nurse who my nurse was that had come in during the wee hours. I described her red hair, blue eyes, and soft voice and she looked at me kinda funny and said: ‘There is no one on this staff that looks like that.’  When I gave a questioning look, she assured me that no one who looked like that worked there.

“It wasn’t until decades later that right ‘out of the blue,’ I saw her in my mind.  I then realized my kind angel nurse was a nurse friend with whom I had worked in college, but who had passed away before I had my baby.  I know Heavenly Father answered my prayers and sent me my friend to help me when I felt so unloved and alone.” (Alice G. Bustamante, Email used with permission)

“Angels are our associates, they are with us and round about us, and watch over us, and take care of us, and lead us, and guide us, and administer to our wants in their ministry and in their holy calling unto which they are appointed.  (Heber C. Kimball, Journal of Discourses, 2:222)

Seeing Departed Grandma on the Bed

Some of the strongest bonds we have are with departed family members.  They continue to love us over time and space.

Sister Wendy Nelson relates a time as a fifth-grader, when her baby brother died. She was overcome with grief.  She writes:

“That’s when my grandmother took me into a private room where she and I could be together to talk and to cry.  She told me that she had been inconsolable when her grandmother Sarah had died. Then, several months later, Sarah –now living on the other side of the veil—visited Grandma.  Sarah sat right on Grandma’s bed. She told my grandmother to stop grieving and get on with her life.  Sarah was very much alive and well.” (Wendy W. Nelson, The Heavens are Open, p. 8)

Sister Nelson’s grandma was deeply touched by her grandmother’s visit. Sarah blessed both a granddaughter and great granddaughter in their times of need.

Deceased Grandfather Returns to Give A Blessing

Charles Harper tells of two sweet experiences where he and his family members were blessed by their departed Grandfather.  He writes:

“In a retirement community where mom lived, my two oldest sons and I gave a priesthood blessing to their grandmother before she had cancer surgery.  My hands were on her head, and my oldest son’s hands were on top of his younger brother’s. Later, my oldest son said that during the blessing he could feel hands on top of his, and felt it was his grandfather helping us from the spirit world.”

In another tender experience, Charles relates:

“My dad always interviewed each of our boys before they got married, but our youngest son, David, wasn’t going to have this blessing because his grandfather had passed away before he could enjoy this loving event. One night, however, David had a dream in which his grandfather interviewed him and gave him counsel.” (Charles Harper, stories used by permission)

“One of the things that will become more important in our lives the longer we live is the reality of angels, their work and their ministry. I refer here not alone to the angel Moroni but also to those more personal ministering angels who are with us and around us, empowered to help us and who do exactly that.” (“For a Wise Purpose,” Ensign, Jan.1996, 16-17).

Have Angels Helped You?  Oh yes, without question!  You’ve known and loved them for eons in the world of spirits, and they’re anxious for your welfare in this sphere.

Angels do all they can do to support us in ways that we can hardly grasp. They help and care for all of us in extraordinary ways, and sometimes when the veil thins, we notice!

My daughter has seven children. Each year I babysit while she and her husband go on a much needed vacation. I start each babysitting by praying for added strength and endurance. Each year I am amazed at what I’m able to accomplish there. They have two staircases that have 18 stairs each and I am able to carry children up them. I am grateful to be able to call upon angels when needed.

I am wondering if some of these experiences are too sacred to share. Often the results of circulating these accounts so freely is that thousands are asking, "What's wrong with me? Why haven't I had this experience when I needed it so much?" While we can know that our loved ones who are deceased, and angels, are supporting to us, it seems more important to me that we carefully cultivate a relationship with the Holy Ghost and our Savior for reliance and comfort.