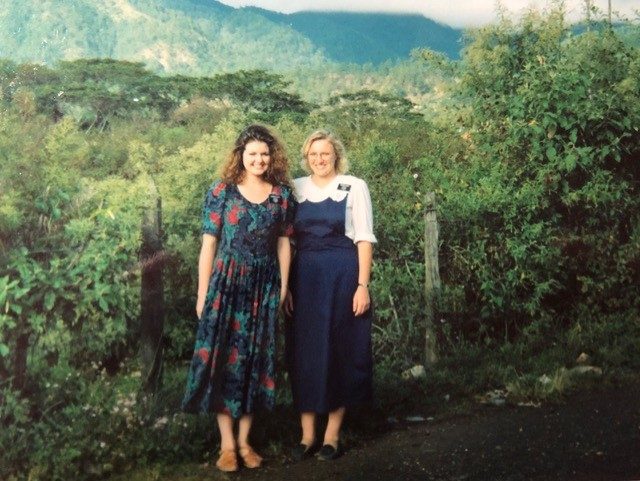 The following is part of a missionary themed series curated by Mark Albright. The author of this piece is named at the bottom.

While serving a mission in Honduras, I had been moved into a companionship with the nurses, who served in the mission office some of the time.  This was partly so that I could help them set up a health booth. The health booth we developed was meant to address education for citizens to practice better hygiene practices, including ways to reduce and prevent cholera, better dental care, etc.  This booth was constructed and then shared in different towns around the mission so that missionaries serving in those areas could run the booth and find opportunities to share the Gospel.

We would work on things like this during the day, and then at night we would go teach families.  It was around this time that my visa was in need of renewal, and it was determined that I would be taken to the government center where the paperwork would be signed and processed.  This was a routine procedure in our mission.

Darius, a man who was employed by the church would take the missionaries from both missions in Honduras and help prepare all the necessary paperwork to keep all mission visas current.  He knew the ins and outs of all the rules and procedures and so he made these arrangements.  The mission president told me to wait after hours at the office, and Darius would come get me and my companions to take me to the government location to complete the processing.  The end of the work day came, and we waited and waited.  No Darius.  Finally after two hours, we decided we would go teaching, and had a good night sharing with families the messages we had prepared.  To be honest, I was glad to avoid the disruption, because I really wanted to teach that night.

The next morning, we arrived at the mission office to find our Mission President and Darius talking.  Darius turned to me quite shaken and said, “Sister Camp, this was pure inspiration, pure inspiration!”  He was very distressed in his face, and they both looked like they had seen a ghost when they were talking.  “What do you mean?” I asked.  He began to explain the events of the previous night.  He told me that he was out running errands when he thought about how I had expressed my desire to teach more families that evening.

He got an impression clearly in his mind that:  “Sister Camp had a lot of missionary work to do, so I could stand in some of the lines at the visa facility and do some of the work ahead of time so she wouldn’t have to be inconvenienced too much.” As he drove to the location and got out of the van, he was kidnapped at gunpoint by abductors and forced into the van with his jacket pulled over his head. A man held a gun close to his head while they acquired his keys and took off with the white van.  For several hours they drove, making terrible threats on his life, and referring to his ‘boss’ (North American missionaries).  They had no idea he himself was in an administrative roll, and it showed they had been watching his moves for several days before attempting this heist.

Darius was newly married, and his wife was expecting their first baby.  Darius prayed dearly as he rode around captive, asking Heavenly Father if this was the end, and would he be seeing his baby.  He said he got a calm, peaceful feeling that everything would be alright.  After several hours, they stopped, cleaned out his pockets of any valuables, and ditched him in a dense uninhabited forest.  He had no idea where he was.  But he knew exactly what to do.

He knelt down and prayed.  Later that evening, a logging truck came by and noticed him waving, and picked him up.  He returned to town just as the dawn was breaking, and he came straight to the mission office to tell the president what had happened. Both men explained to me that if I had been with Darius when this incident happened, circumstances would have been much worse.  As it was, the Lord arranged for me to be safe, teaching the gospel, and Darius had safely been brought home without a scratch to be with his family again..

I am so grateful that Darius listened to a small prompting that day to leave without me.  His willingness to obey kept me safe.  I’ve had many personal incidents on my mission which are not as dramatic, but definitely faith promoting.  And applying those lessons to listen to the Spirit and heed the promptings right away has made all the difference.

So glad to see Brother Albright's contribution again. I have missed these inspiring stories.

Thank you for sharing.