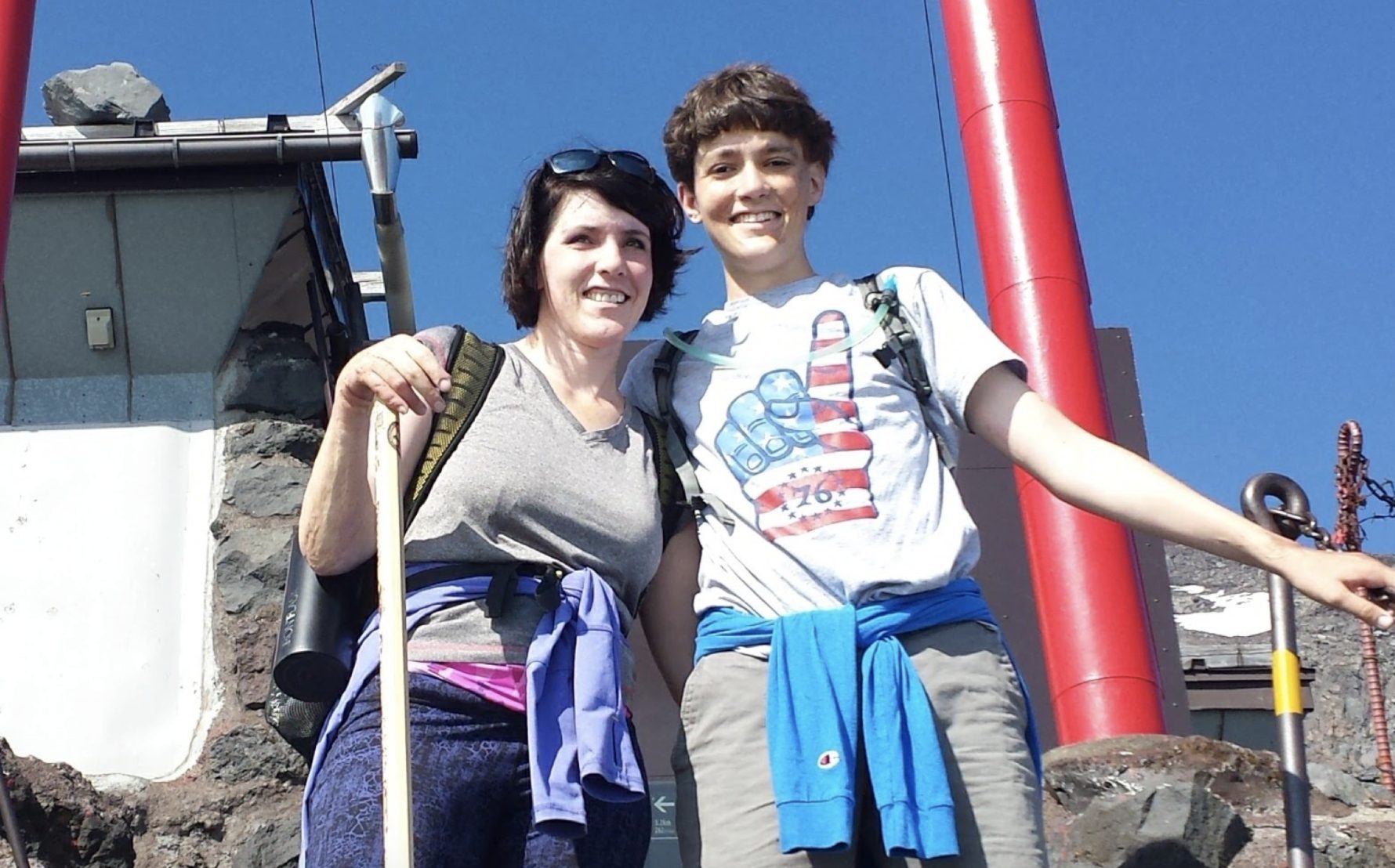 “People are like stained-glass windows.  They sparkle and shine when the sun is out, but when darkness sets in, their true beauty is revealed only if there is a light from within.”—Elisabeth Kubler-Ross

After hours of chaos, darkness and fear, I found myself sitting on a fallen branch of a grand tree in the middle of a great green field surrounded by flowers and long grasses.  Birds were singing and an indescribable peace surrounded me.  As I looked to my right, there was Grandpa Swasey looking much younger than he had when he had passed away only three weeks previously.  I joyously greeted him and wrapped my arms around him, so relieved that now he could take me with him!  To my dismay he insisted, “Amber, I am not here to take you with me.  Your family needs you.  Remember in November when we talked about you putting your family first?”

“Yes, but that was before I got hurt, Grandpa!  They’ll be okay.  Darrin is strong!  Please take me with you.”  I was begging.

Grandpa sat there in his cowboy boots with his hat on his knee.  I looked at him and touched his hands as I continued my plea to be allowed to stay.  But then I knew he was right.  Time passed.  I’m not sure how long we sat there, but after a while a calm peace came over me, testifying to me of the importance of my family, and I knew once again that I needed to return.  We both stood.  He assured me that things would be okay and that I could do it. He took my hand, and we walked across the field together.  Then he turned away and began walking back towards the tree.  I tried as hard as I could to keep my eye on him.  As long as I could see him, I wasn’t hurting.  I watched him for awhile, and then I saw a young girl who was waving at Grandpa.  She went to him and hugged him, and then he took her hand, and they walked away.—

And with that Amber Swasey Williams painfully re-entered her severely-burned body as it continued its lifeflight aboard a helicopter bound to the burn center at the University of Utah in Salt Lake City along with her four-year-old son, Hunter.  A few hours previously, the mother and child had been seated on basement stairs at her parents’ home in Castledale, UT, patiently waiting for hot water to be restored so they could shower.  It was Good Friday of 2005.  What had begun as a Spring Break getaway had instantly dramatically changed the trajectory of multiple lives with the ensuing explosion.  Amber and Hunter were immediately engulfed in flames that burned 37% of her body and 50% of his.  She immediately uttered a fervent five-word prayer as they ran frantically to put out the flames:  “Heavenly Father, please help us!!!”

Twelve weeks later following induced comas, skin grafts, difficult and painful therapies and repeated priesthood blessings the pair returned to their home in Providence, UT, to continue to heal.  Father/husband Darrin and seven-year-old sister/daughter Hailey soon learned that although they were not burn survivors, they individually would bear internal scars from this experience which would affect the family so dramatically.

The immediate daily routines involved meticulous care and changing of bandages as well as frequent medical visits.  Pain was a constant.  Post traumatic stress left its jarring mark as everyone who loved this family reeled from the tragedy.  Prayers and fasting.  Long distance communication back and forth with concerned grandparents on a mission in Africa.  The best in humanity became readily apparent as the home was wrapped in loving care and service.

The spirit directed this family to avoid the opioids prescribed for them to ease the pain.  Because of their violent opposition to the drugs they turned to prayer and experienced its soothing effects daily.  Nevertheless, Amber reports that her feet burned for three years because of nerve damage.

One disguised blessing presented itself that summer in the form of a ward auction.  Because she knew she needed to get outside herself to survive, Amber volunteered to teach sewing lessons—two hour lessons a week for five weeks to two young girls in the ward.

“It took me 90 minutes each day to get my body to even move.  Teaching forced me to push through that.  I couldn’t move my hands at all because they were so severely damaged, so I had to talk the girls through every single task including how to thread a needle.   I couldn’t stand, so we did all the instruction on the floor.”

Ten years later—following multiple corrective operations and procedures—Hunter needed two additional grafts on his leg, one inch by five inches and one inch by three inches.  Each graft had to be packed with gauze for 14 days in order to heal, and Hunter had to keep complete weight off of his legs. At the end of ten days on a Friday when the bandages were removed by Amber and Darrin the wounds were black and full of infection.  This meant a six to nine month recovery before they could begin the whole process again! The limb could even possibly be lost!

At this point the immediate treatment was to change the bandages every three hours around the clock.  The desperate word went out for a fast on Hunter’s behalf that he would have strength for the long, long recovery.  Some family members prayed for a miracle.

On Sunday afternoon when the bandages were removed for changing, the family witnessed that the grafts were no longer black and the infection was no longer oozing!  When they called the nurse she said, “Continue what you’re doing!!”

The following morning at the hospital a team of 12 professionals met expecting a long meeting to re-assess treatment.  What they witnessed instead was a merciful miracle.

When the body is subjected to shock immediate defenses are enlisted.  The body instantaneously wages war against intruders.  The healing process begins almost immediately.  Amber and Hunter’s healing process has included multiple medical procedures, but their emotional healing has evolved as well.

“Sometimes I think we have these grand life missions to fulfill, but I think I really believe that it’s the little daily interactions that are our mission.  Hunter had a fifth grade teacher who was struggling with self-esteem because of acne.  Then he showed up in her first fifth grade class, and she later said, ‘Here was this little burn victim boy happily going his way changing lives.’  He gave his teacher hope and dramatically influenced her.   Little ordinary events align to create something wonderful and life-altering.”

Amber goes on to describe her personal journey as a result of being a burn victim.  “I would have been more vain without this experience.  Material things and how I looked were so very important to me.  I spent a lot of time and money on my hair, for instance.  But my experience replaced that with the ability to be more empathetic.  Thirty percent of my 180 high school students were suffering with diagnosed emotional issues—anxiety, depression.  My experience made me a more effective teacher on their behalf.”

We all look back on life and measure time in terms of goals accomplished or landmarks reached.  We reckon the years and decades with photographs or journal entries.  Looking in the mirror brings us up short and reminds us that time is passing.  Amber and Darrin have daily reminders of their life-altering experience in terms of visible scars.  Hunter has returned from a Canadian mission in the last few months, and Amber nears the completion of a PhD program.  Their emotional and spiritual bank accounts register maturity and expansion immeasurable.  In the spirit of an old native American saying, they surely agree– “Praise the bridge that carries you over.”

This is so inspiring! Thank you for sharing. One tip, though, would be to call them “burn survivors” NOT “burn victims.” Two of my children are burn survivors, and in the burn community, this is how they prefer to be called.

So inspiring! Thank you for sharing!