Treasures of the Restoration Puzzle: All Hidden Things | Meridian Magazine 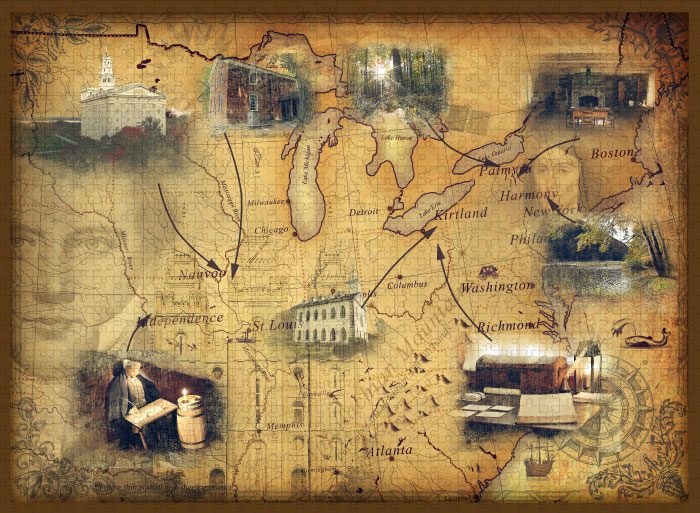 Treasures of the Restoration Puzzle: All Hidden Things

The following is a collection of articles that correspond with the 11 hidden things found in the Treasures of the Restoration jigsaw puzzle. Each article tells a little more about the story/reasons why that particular item was included in this puzzle. Feel free to explore them all with your family as you put together the puzzle so that you can all learn a little bit more about Church history. If you are giving the puzzle as a gift, share this URL: latterdaysaintmag.com/hiddenthings to help your friend or family member find this page.

The following is the first in a series of articles giving greater detail from the stories behind the hidden things in our recently released Treasures of the Restoration jigsaw puzzle. Today we share the amazing background on the Maid of Iowa–the steamboat the carried hundreds of new converts up the Mississippi to Nauvoo.

Though Joseph Smith pleaded for divine protection for the saints when they were suffering persecutions in Missouri, he also decided that they should seek protection from the federal government as well. It was on that fateful trip to Washington, D.C. that something dramatic and unexpected happened.

The 40 years of construction on this beloved structure, the thousands of people that contributed, and the rich legacy they have left us with, are full of interesting and inspiring stories and details worth knowing. Here are just five.

Why are some people miraculously spared while others are not? An inexplicable incident in the Carthage Jail provides a compelling example of why this might be.

On February 4, 1846, the very same day the first saints left Nauvoo, a ship known as the Brooklyn set sail out of New York Harbor. It was a cargo ship that had been chartered to carry 70 men, 68 women, and 100 children—238 passengers total—on a voyage that would ultimately total 24,000 miles and take nearly six months.

Hidden Things: What did Joseph Smith Actually Look Like?

Perhaps the easiest hidden thing to spot at a glance as you look at the box of our Treasures of the Restoration jigsaw puzzle is the portrait of the prophet Joseph Smith. But how accurate is this picture of Joseph Smith? What do we know about what he really looked like?

Think of the fourteen-year-olds you know. Being able to visualize them gives new meaning as I read the account in the Joseph Smith history—not only of the glorious First Vision, but of all that transpired for the boy who would be prophet, immediately afterwards. How did this 14-year-old respond to peer pressure?

Is it worth going through our own Liberty Jail moments just to get experience? Why is experience so essential to our Heavenly Father’s plan for us? Why must we face such trials and tribulation to become like Him?

Hidden Things: What Does it Mean to be “Cut Out of the Mountain Without Hands”?

It was a bold assertion for a young, uneducated man in upstate New York to look upon his initially small congregation and believe that he was an integral part in establishing that very kingdom that was “cut out of the mountain without hands” and would grow to fill the whole earth. But Joseph knew with prophetic inspiration that the Restored Gospel was that stone, humble though its beginnings may have felt.

Hidden Things: Six Things You Might Not Know About the Golden Plates

How much do you know about the golden plates? Here are just six things about them that you may not already know that are sure to increase your appreciation for them and all that went in to the process of translation.

Hidden Things: Emma Smith Through the Eyes of Those Who Knew Her Best

Too often we may fall into the trap of thinking that Emma was just an extension of Joseph rather than seeing her as a person of great religious conviction, influence, and impact in her own right. We look forward to the opportunity to shed a little extra light on who she was—particularly by seeing her through the eyes of those who knew her best.

Wonderful comments about this great puzzle. We purchased it and now it is hanging on our wall downstairs. It is such a delight and so very interesting. We are still wondering what significance the whale has - lower left side of the puzzle. We are puzzled? We would like to know!!