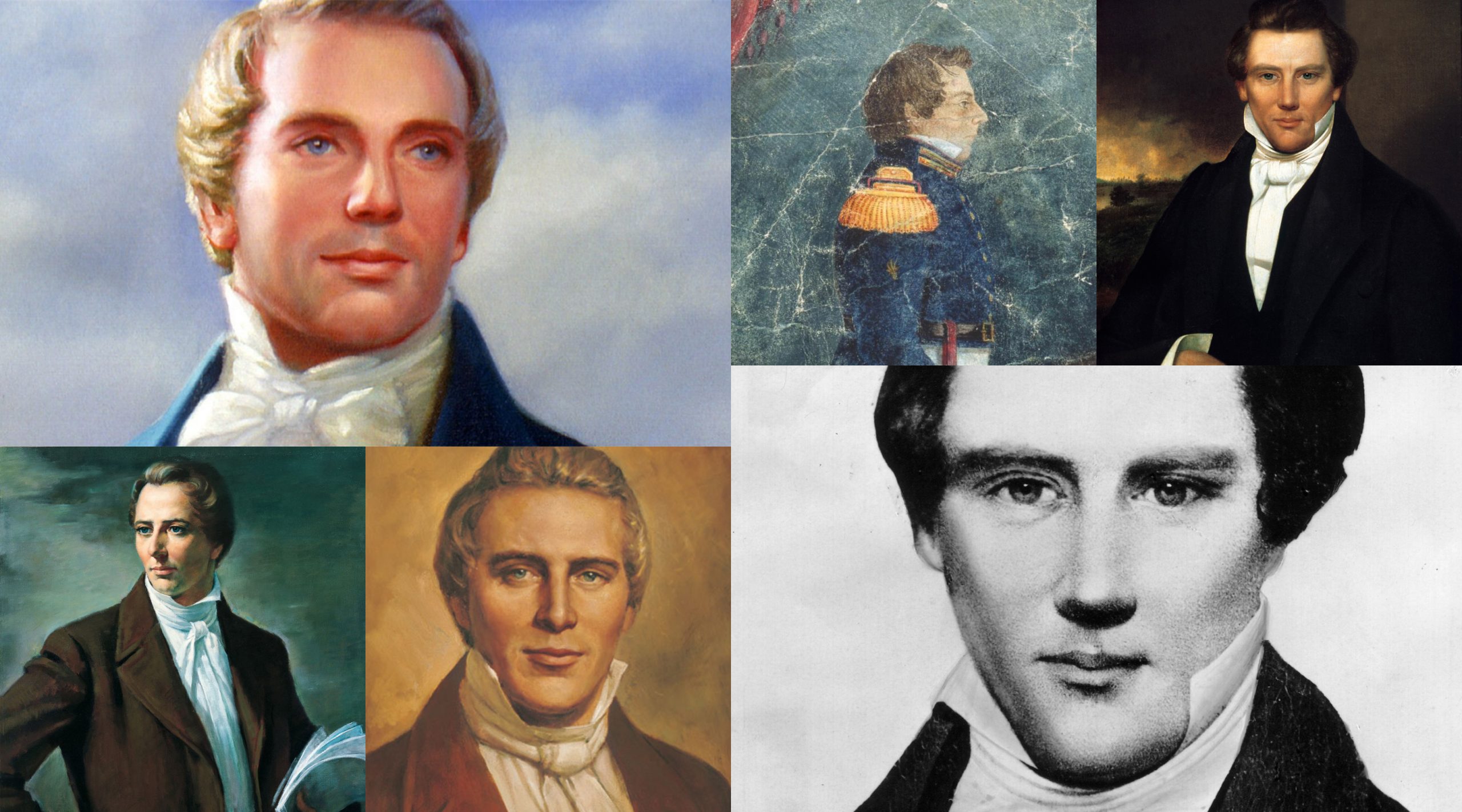 Hidden Things: What did Joseph Smith Actually Look Like?

The following is the sixth in a series of articles giving greater detail from the stories behind the hidden things in our recently released Treasures of the Restoration jigsaw puzzle. If you haven’t gotten yours yet, BUY IT HERE.

If you have, bookmark or print this page so you can hang on to the story to share with your family as you come upon the portrait of Joseph Smith when you do the puzzle. Read the fifth article in the series HERE.

Perhaps the easiest hidden thing to spot at a glance as you look at the box of our Treasures of the Restoration jigsaw puzzle is the portrait of the prophet Joseph Smith. But as I put the puzzle together myself, I found it to be, by far, the hardest image in the puzzle to piece together. Finding his visage among the pieces is much more difficult than spotting it in the picture. So, how accurate is this picture of Joseph Smith? What do we know about what he really looked like?

The 1845 portrait of Brother Joseph that is included in the puzzle was actually painted a year after he died. Upon further study, I have learned that very few images were captured of him while he was alive to pose for them. Historians are certain of one artist—Sutcliffe Maudsley—who sketched and painted images of Joseph Smith from seeing him personally. Maudsley was born and raised in Lancashire, England and worked as a pattern maker and designer at a textile mill, but was sent out to learn art, having demonstrated a bit of a knack for it from a young age.[1]

Maudsley converted to the Gospel, moved to Nauvoo and became one of three known portrait artists living there in the early 1840s. He had an immediate fondness for Joseph and the Smith family and painted portraits of many of them. Little is known about how these paintings were commissioned or displayed, but they provide a critical and rare historical record.

We do know that Joseph mentions posing for Maudsley in his journal entry dated June 25, 1842, “Transacted business with Brother Hunter, and Mr. Babbitt, and sat for a drawing of my profile to be placed on a lithograph of the map of the city of Nauvoo.”[2] The figure in profile of Joseph Smith that later appeared on the aforementioned map of Nauvoo shows the prophet in full military uniform. He appears fairly small in stature, perhaps a bit heavyset.

So, how does this compare to the verbal descriptions we have of his physical appearance?

Joseph Smith was a man possessing of a “tall, well-built form”, said Lydia Bailey, an early convert to the Church. He had “the carriage of an Apollo, brown hair, handsome blue eyes which seemed to dive down to the innermost thoughts with their sharp penetrating gaze, a striking countenance, and with manners at once majestic yet gentile, dignified yet exceedingly pleasant.”[3]

“He was a fine-looking man,” said Wandle Mace in a journal entry, “tall and well-proportioned, strong and active, light complexion, blue eyes, and light hair, and very little beard.”[4]

The Weekly Gazette, a publication out of St Louis, Missouri published an extremely detailed description of the prophet. Here is a small portion of what they portrayed:

His forehead is white, without a furrow, and notwithstanding the small facial angle, somewhat symmetrical. His hair is quite light and fine, complexion pale, cheeks full, temperament evidently sanguine, lips thin rather than thick.

But the Prophet’s most remarkable feature is his eye. Not that it is very large, or very bright, very thoughtful or very restless, or even very deep in its expression or location; for it is usually neither of them. The hue is light hazel, and it is shaded, and, at times almost veiled by the longest, thickest light lashes you ever saw belonging to a man. The brows are also light and thick indeed, precisely of that description called bettle-brow.

The Prophet’s wife is reported to have said of him, ‘No painting of him could catch his expression, for his countenance was always changing to match his thoughts and feelings.’”[5]

Perhaps the most interesting, intimate, and in-depth description of the Prophet’s physical appearance and his character comes to us from early Church apostle Parley P. Pratt:

President Joseph Smith was in person tall and well built, strong and active; of light complexion, light hair, blue eyes, very little beard, and of an expression peculiar to himself, on which the eye naturally rested with interest, and was never weary of beholding. His countenance was ever mild, affable, beaming with intelligence and benevolence; mingled with a look of interest and an unconscious smile, or cheerfulness, and entirely free from all restraint or affectation of gravity; and there was something connected with the serene and steady penetrating glance of his eye, as if he would penetrate the deepest abyss of the human heart, gaze into eternity, penetrate the heaven and comprehend all worlds.

He possessed a noble boldness and independence of character; his manner was easy and familiar; his rebuke terrible as the lion; his benevolence unbounded as the ocean; his intelligence universal, and his language abounding in original eloquence peculiar to himself–not polished–not studied–not smoothed and softened by education and refined by art; but flowing forth in its own native simplicity, and profusely abounding in variety of subject and manner. He interested and edified, while, at the same time, he amused and entertained his audience; and none listened to him who were ever weary with his discourse. I have even known him to retain a congregation of willing and anxious listeners for many hours together, in the midst of cold or sunshine, rain or wind, while they were laughing at one moment and weeping the next. Even his bitter enemies were generally overcome, if he could once get their ears…[6]

So how do these descriptions compare to what we see in the Maudsley profile portrait? The physique seems a bit of a mismatch, though since Joseph said in his journal that he “sat” for a drawing and the image is one of him standing, it is possible that Maudsley only drew his face in person or merely made initial sketches from life, and only added the rest of the physical characteristics later to fit with the design and shape of the map as the other details of the design came together.[7]

Joseph mentions one other artist who came to capture his image during his lifetime. In a series of journal entries from mid-September of 1842, he writes:

The only problem? We don’t know for certain what painting Brother Rogers painted. It may be one of the many we have that are from unidentified artists, or it may be lost to history somewhere. Junius Wells, the first head of the Young Men’s Organization for the Church and a magazine editor, said of the Rogers painting:

[It] hung first in the Mansion House and afterward in the Nauvoo House in possession of the Prophet’s widow, Emma Smith. Upon visiting her, in the winter of 1875-76, she entertained me very hospitably and showed me the painting, then hanging in her bedroom in the Nauvoo House. I asked her if it were a good likeness of the Prophet. She replied, “No, He could not have a good portrait—his countenance was changing all the time.” I then asked her what he thought of it and she replied: “I can tell you that, for I asked him and he said: ‘Emma, that is a nice painting of a silly boy, but it don’t look much like a Prophet of the Lord.’”[9]

Though it is unclear which painting this anecdote refers to, this painting—originally credited to Sutcliffe Maudsley—is now believed, by The Museum of Church History and Art, to have been done by David Rogers[10]:

The only other image that potentially exists that was captured while Joseph was still alive is a daguerreotype—an early form of a photograph. Several historical letters and documents mention the existence of one taken of Joseph Smith, but so far all that has come to light have been daguerreotypes of other paintings at best.

After the martyrdom of the prophet, the demand for images of him (both from faithful saints who wanted to mourn and from curious critics who wanted to gossip) skyrocketed. Sutcliffe Maudsley likely made many lithographic copies of his original sketches (like those pictured below) to meet the desires of the Saints to have an image of the prophet in their family Bible or in their copy of the Book of Mormon.

So, what other source material do we have for determining what Joseph Smith really looked like?

One important source that many artists have looked to, to better visualize the prophet is the death mask that was made in plaster shortly after his death. Though several factors probably make it an imperfect likeness (the likelihood that injuries from the nature of his death might’ve altered his facial features, for example), it is still an interesting visual to inform our mental picture of a prophet.

In 2016, a graphic, digital illustration artist named Chad Winks layered realistic features on top of the death mask to create what he claimed may be “as accurate an image of the prophet as we have available”.

Another attempt to use modern technology to get a more realistic picture of what Joseph really looked like comes in the form of a series of images posted to reddit only a month ago. The reddit user posting said, “AI can analyze a portrait and calculate what the actual person may have looked like in real life, based on techniques and styles common at a given time or in a given place. This is what AI thinks Joseph and Emma Smith may have looked like”, follow by this series of images:

Without more information on the source of this technology and analysis, it is difficult to say how meticulously or accurately this was done. Nonetheless, it is fascinating to have a photorealistic picture of what Joseph and Emma may have looked like. Sometimes it is too easy to relegate figures from history to some distant, painted past rather than remembering that they were very real people like you and me.

Ultimately, does it matter that we know exactly what Joseph Smith looked like? Does it change our testimony of the Book of Mormon? Does it change how we see the things he accomplished in restoring the Gospel? Hopefully, it does not.

And yet, the farm boy turned Prophet of this last dispensation is dear to us for the courage and perseverance it required of him to bring us the things we treasure most. We owe him much and love him much and wonder what it would feel like to look him in the eye and say thank you.

Whether we ever learn which painting is closest to the real thing, or whether that illusive, missing daguerreotype ever comes to the surface, one thing is certain; because of the very ordinances of salvation that he brought back to the earth, “millions shall know Brother Joseph again”.

What is your favorite picture of Joseph Smith? Tell us in the comments below.

Not trying to be morose but I have thought that the death mask may have an elongated chin and maybe even made it less protruding for two reasons: 1. In death the jaw may partly open and froze there 2. He fell on his face and jaw was broken and when the mask was taken the jaw may have been misplaced if the bones were broken through.