Hidden Things: Six Things You Might Not Know About the Golden Plates | Meridian Magazine 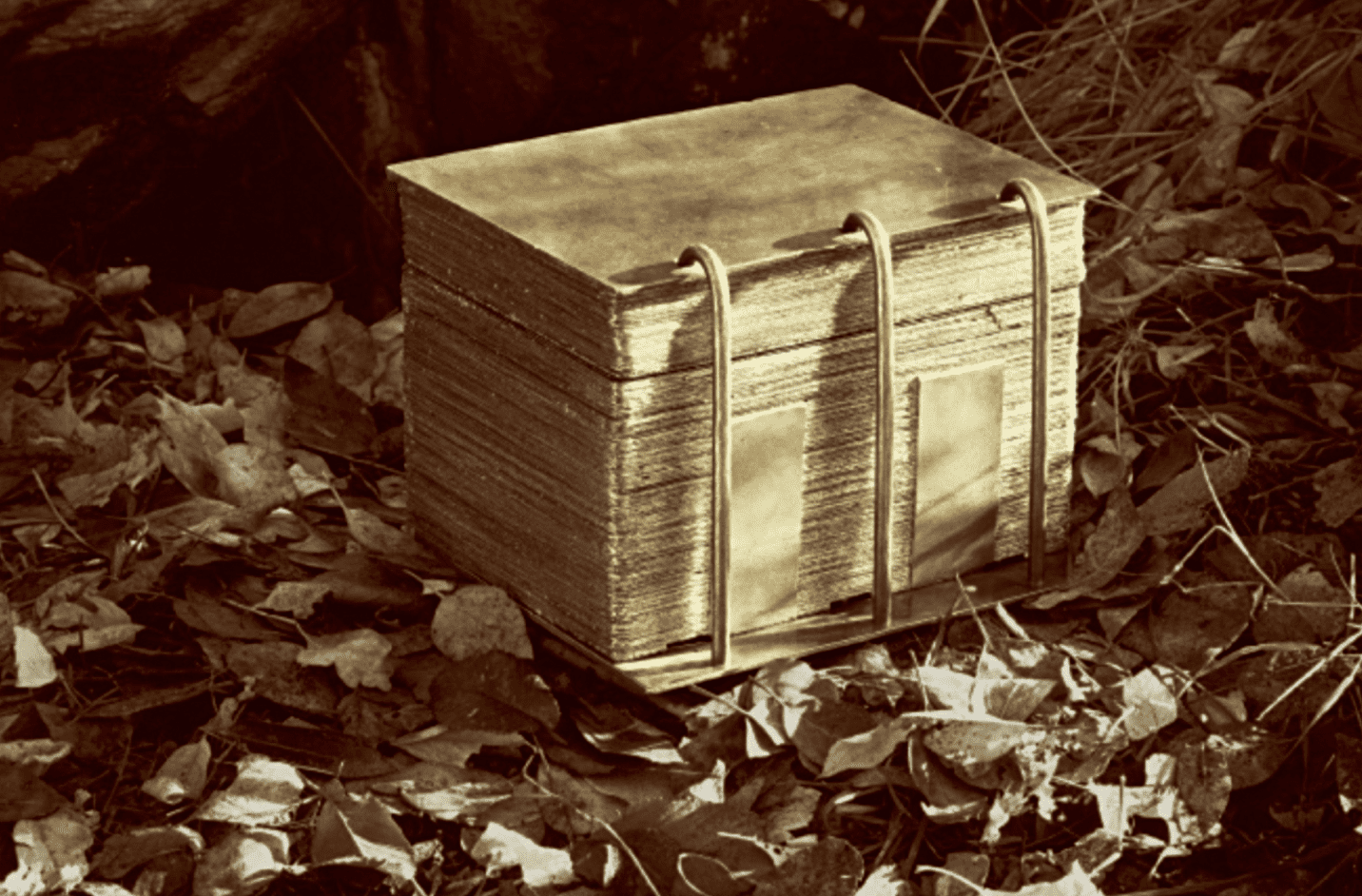 Hidden Things: Six Things You Might Not Know About the Golden Plates

The following is the tenth in a series of articles giving greater detail from the stories behind the hidden things in our recently released Treasures of the Restoration jigsaw puzzle. If you haven’t gotten yours yet, BUY IT HERE. It’s not too late to get it before Christmas!

If you have, bookmark or print this page so you can hang on to the story to share with your family as you come upon the hidden phrase when you do the puzzle. Read the ninth article in the series HERE.

One of the things we had to hide in our Treasures of the Restoration jigsaw puzzle was the golden plates. It seemed appropriate, not only because they were hidden in real life, but because the text that came from them is “the keystone of our religion.” More than 150 million copies of the Book of Mormon have been printed[i] and millions of lives have changed by its second witness of the Lord Jesus Christ.

But how much do you know about the plates themselves? Here are just six things about them that you may not already know that are sure to increase your appreciation for them and all that went in to the process of translation.

The angel Moroni asked Joseph to bring his brother Alvin with him to retrieve the gold plates.

The first time a seventeen-year-old Joseph went to the place where the plates were hidden, after being shown where they would be in vision, he pried open the box and looked inside. But when he reached for the shining, ancient contents, he felt a shock pulse through his body. He tried twice more and was shocked each time. It was then that the angel Moroni appeared and explained that Joseph could not obtain the book because he had not kept the commandments of the Lord.

But less than two months later, Alvin came home with severe pain in his abdomen Doubled over in agony, he asked his father to go for the doctor. But when the doctor came, as was so often the case in those days, his prescribed treatment only made things worse.

Alvin would only live a few more days, but his last admonishment to Joseph was to “do everything that lies in your power to obtain the records…Be faithful in receiving instruction and keeping every commandment that is given you.”[ii]

Joseph took these dying words seriously, and he also took the loss of his brother extremely hard. It must’ve added an extra measure of comfort, years later, when he received the vision of the three degrees of glory to witness—as part of the vision—Alvin in the future celestial kingdom.[iii] Though he had not been baptized, the Lord witnessed this truth to Joseph: “all who have died without a knowledge of this gospel, who would have received it if they had been permitted to tarry” will inherit celestial glory (Doctrine and Covenants 137:7).

Right there in the standard works, Joseph Smith–History 1:52, it tells us that the plates were not the only things sealed up in the box by the prayer of faith. “I looked in,” Joseph says, “and there indeed did I behold the plates, the Urim and Thummim, and the breastplate…” But was that everything?

In Scot Facer Proctor’s recent book, Eleven Things You Probably Didn’t Know About the Book of Mormon, he says there were eight sacred items contained in that box. And the depictions we may have seen of a compact stone container, fitted perfectly for only the plates is just not accurate.

Besides the plates, Urim and Thummim and breastplate, Doctrine and Covenants 17:1 says that the box also contained the sword of Laban and the Liahona.

The other three items are the bows (which hold the Urim and Thummim), the plates of Brass, and the rod of Aaron. And the box, far from being something small, was described by David Whitmer as “a casket”.[iv]

The text on the plates would’ve been read from right to left.

We know from the opening pages of the Book of Mormon that Nephi says he is making his record, “in the language of my father, which consists of the learning of the Jews and the language of the Egyptians”. What we might not realize is that the language the plates were written in would be read from right to left, not left to right the way that English is.

Joseph said, “the title-page of the Book of Mormon is a literal translation, taken from the very last leaf, on the left hand side of the collection or book of plates, which contained the record which has been translated, the language of the whole running the same as all Hebrew writing in general; and that said title page is not by any means a modern composition, either of mine or of any other man who has lived or does live in this generation”[v].

The very last leaf was on the left-hand side. And the language of the whole ran the same as Hebrew. As such, when you see an artistic representation of Joseph sitting with a few plates open on his left and the bulk of the plates on the right side of the fasteners, it appears to English-reading eyes that he is just beginning. But if he were really just beginning, it should look to us like he was reading the back cover.

The plates weighed around 60 pounds and that’s not the only things we know about what they were like.

“Although no single comprehensive description of the Book of Mormon plates has been preserved,” says Kirk B. Henrichsen, “the Prophet Joseph Smith and several people closely associated with him made various statements that include partial descriptions of the plates. When all of the available sources are considered, quite a detailed picture emerges of the physical characteristics of the ancient Nephite record.”

These statements are compiled in Henrichsen’s 2007 article, “What Did the Golden Plates Look Like?” and include statements from both Emma Smith and Martin Harris estimating the weight of the plates at around 60 pounds. As a farmer in that day when things were being bought and sold by weight, Martin’s estimation based on hefting something was likely not far off.

As for their measurements, many made statements on how wide and tall and thick they were. Joseph Smith himself said that they were “six inches wide by eight inches long” though David Whitmer and Martin Harris both estimated them at seven inches wide. Martin Harris also thought the thickness to be about four inches, though Orson Pratt believed it to be more like six inches.

I once sat around the table with my in-laws and we took turns holding up what we believed were different increments with our hands, and then took out a real measuring tape to see who estimated best and our realities were all over the board. Nonetheless, the historical statements taken together give you an idea of approximately how big the plates were.

And Emma said of the pages that they, “seemed to be pliable like thick paper, and would rustle with metallic sound when the edges were moved by the thumb, as one does sometimes thumb the edges of a book.”

We know more than you think about what’s contained in the sealed portion.

Orson Pratt described about two thirds of the plates as being sealed this way. Again, in Scot Facer Proctor’s recent book he says, “We have only about one-third of the translation of the gold plates—531 English pages…Two-thirds of the gold plates left would mean there are approximately 1,062 pages yet to come forth.” What a thrilling prospect. And what would be contained in those pages?

So, what is contained in the sealed portion? Merely a vision of the entire history of the world as shown to the brother of Jared. I don’t know about you, but I’m looking forward to reading that.

What happened to the plates? Where are they now?

We don’t have nearly as much detail on the way the plates were given back as we do on the way they were received. According to Elder Bruce R. McConkie, “The actual translation of the portion we now have as the Book of Mormon did not take place until between April 7 and June 11, 1829. Thereafter the plates were returned to the custody of Moroni.”

Why were the plates returned? Why weren’t we given the opportunity to keep them as a Church artifact or show them in a museum, where people could have further proof of the truth of Joseph Smith’s story?

For one thing, once rumors circulated that Joe Smith had a golden treasure, the plates were in constant danger of falling into the wrong hands. Though the Lord protected them miraculously again and again, it may have been a bit of a relief for something so sacred to be given back to angelic protection.

Additionally, Monte S. Nyman pointed out that, “The scriptures suggest two reasons the Book of Mormon gold plates were not made available to the public: the first is that the Lord refused to allow men to use these sacred plates for commercial or personal benefit; the second, and most important, was so the Lord could test the faith of all who receive the record.”[vii]

Christ said, “blessed are they that have not seen, and yet have believed” (John 20:29) Whether we would choose for it to be that way are not, we have the opportunity for that blessing—the blessing of believing without getting to see.

But even if the plates were displayed somewhere for all to see, it would not be enough. Laman and Lemuel were visited by angels and yet failed to believe. Ultimately, even with manifestations and artifacts right in front of our eyes, we still have to be receptive to the whisperings of the Holy Ghost in order to discern whether what’s contained on the golden plates is true. It ultimately doesn’t come down to how much proof we can find, it comes down to that oft-quoted promise that came from these very plates:

“And when ye shall receive these things, I would exhort you that ye would ask God, the Eternal Father, in the name of Christ, if these things are not true; and if ye shall ask with a sincere heart, with real intent, having faith in Christ, he will manifest the truth of it unto you, by the power of the Holy Ghost.”

If you have not had your own witness yet, the reality of that promise awaits you.

The Rod of Aaron?? Why has this artifact not been mentioned before? How did it get to the New World? Joseph received the Gold plates but left all the other sacred items in the box? Just a few questions.

I can't remember if it was President Kimball or President Hinckley that said, when asked, that we would receive the rest of the gold plates when we had sufficiently read what we already have. In other words, if we don't read what we have, why would we be given the rest? Good point!