Hidden Things: An Experience So Momentous that Joseph “Could Not Deny it” | Meridian Magazine 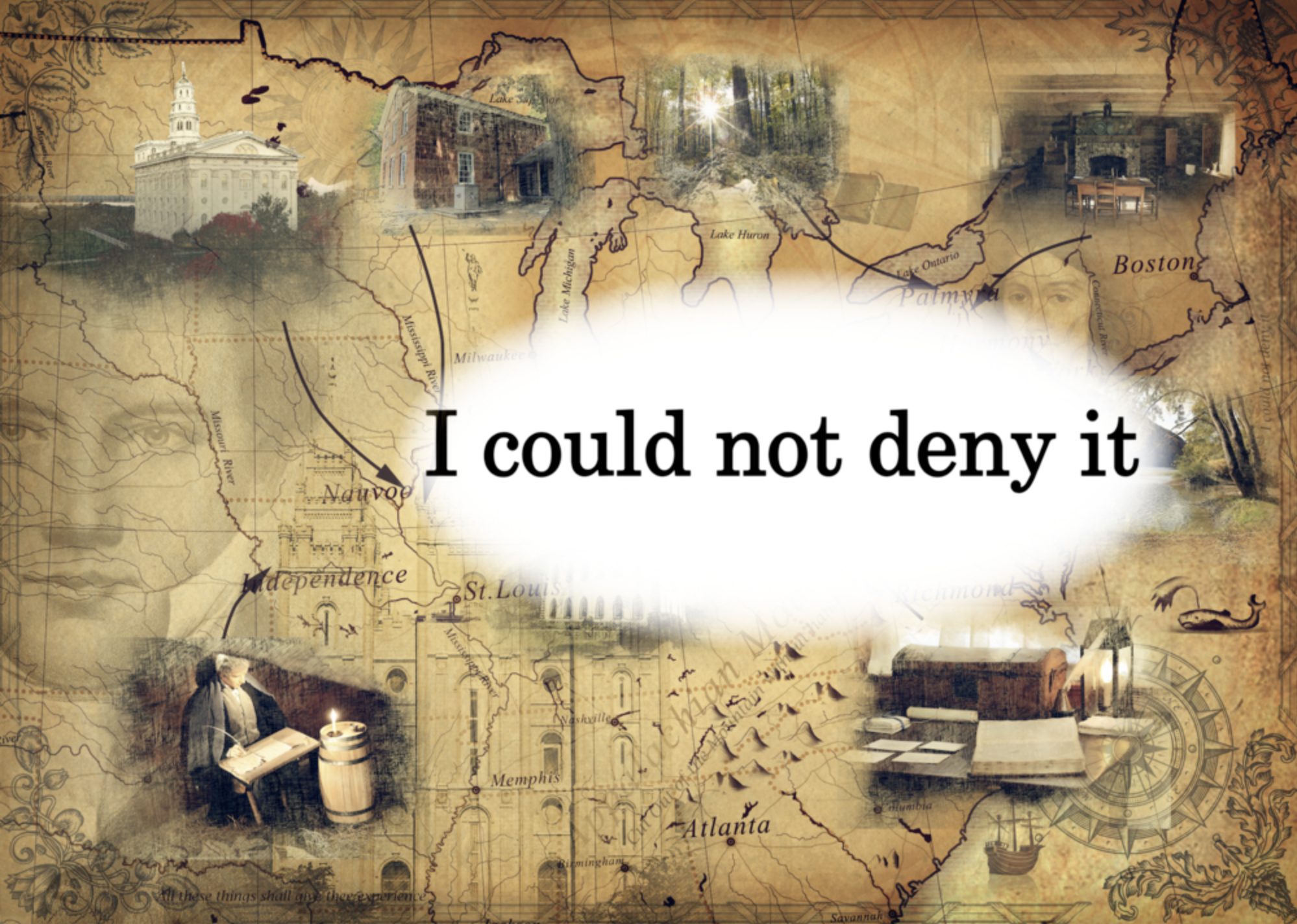 The following is the seventh in a series of articles giving greater detail from the stories behind the hidden things in our recently released Treasures of the Restoration jigsaw puzzle. If you haven’t gotten yours yet, BUY IT HERE.

If you have, bookmark or print this page so you can hang on to the story to share with your family as you come upon the hidden phrase when you do the puzzle. Read the sixth article in the series HERE.

Think of the fourteen-year-olds you know. I had four nephews born the same summer and this is the year they all turned fourteen. They are suddenly getting taller, more mature looking; no longer the round faced five-year-old’s that used to chase each other around at our family picnics. And yet, they are still so young, still know so little of the world, and are still so influenced by the approval and opinion of their peers.

Being able to visualize them gives new meaning as I read the account in the Joseph Smith history—not only of the glorious First Vision, but of all that transpired for the boy who would be prophet, afterwards.

In his own words, he says:

Some few days after I had this vision, I happened to be in company with one of the Methodist preachers, who was very active in the before mentioned religious excitement; and, conversing with him on the subject of religion, I took occasion to give him an account of the vision which I had had. I was greatly surprised at his behavior; he treated my communication not only lightly, but with great contempt, saying it was all of the devil, that there were no such things as visions or revelations in these days; that all such things had ceased with the apostles, and that there would never be any more of them.[1]

Picture a fourteen-year-old you know in this situation. He has offered an account of an experience that was very significant to him, only to have a trusted adult immediately dismiss it as not only untrue, but potentially even the work of a devil. Someone to whom he looked for approval declared forcibly that this was not a long-awaited missive from God as he understood it to be.

My heart aches to think of that preacher saying that there are “no such things as visions or revelations in these days”. It brings to mind an exchange Hugh B. Brown had with a prominent member of the British House of Commons who was also a Christian, but skeptical of any claims that continuing revelation might be possible. Answering the claim that revelation ceased after New Testament times, Elder Brown said:

“Why do you think it stopped?”

“You think that God hasn’t spoken since then?”

“There must be a reason. Can you give me a reason?”

“May I suggest some possible reasons? Perhaps God does not speak to man anymore because He cannot. He has lost the power.”

He said, “Of course that would be blasphemous.”

“Well, then, if you don’t accept that, perhaps He doesn’t speak to men because He doesn’t love us anymore and He is no longer interested in the affairs of men.”

“No,” he said, “God loves all men, and He is no respecter of persons.”

“Well, then, if He could speak, and if He loves us, then the only other possible answer, as I see it, is that we don’t need Him. We have made such rapid strides in science and we are so well educated that we don’t need God anymore.”

And then he said—and his voice trembled as he thought of impending war—“Mr. Brown, there never was a time in the history of the world when the voice of God was needed as it is needed now. Perhaps you can tell me why He doesn’t speak.”[2]

That exchange happened just at the outbreak of World War II, yet the desperate need for the voice of the Lord in our times rings just as true today. (I would highly encourage you to seek out Elder Hugh B. Brown’s entire address and listen to it in his own voice, there is no delivery quite like his).

Returning to the scene of our fourteen-year-old farm boy for whom the heavens reopened:

I soon found, however, that my telling the story had excited a great deal of prejudice against me among professors of religion, and was the cause of great persecution, which continued to increase; and though I was an obscure boy, only between fourteen and fifteen years of age, and my circumstances in life such as to make a boy of no consequence in the world, yet men of high standing would take notice sufficient to excite the public mind against me, and create a bitter persecution; and this was common among all the sects–all united to persecute me.

It caused me serious reflection then, and often has since, how very strange it was that an obscure boy…who was doomed to the necessity of obtaining a scanty maintenance by his daily labor, should be thought a character of sufficient importance to attract the attention of the great ones of the most popular sects of the day, and in a manner to create in them a spirit of the most bitter persecution and reviling. But strange or not, so it was, and it was often the cause of great sorrow to myself.

How could one so young have the strength to stand up to such unanimous persecution? Wouldn’t it have been easier to just step down? Wouldn’t you inevitably step back inside of yourself and wonder—if everyone around me is telling me this is impossible, maybe I’m the one that is wrong.

However, it was nevertheless a fact that I had beheld a vision.

I have thought since, that I felt much like Paul, when he made his defense before King Agrippa, and related the account of the vision he had when he saw a light, and heard a voice; but still there were but few who believed him; some said he was dishonest, others said he was mad; and he was ridiculed and reviled.

But all this did not destroy the reality of his vision.

He had seen a vision, he knew he had, and all the persecution under heaven could not make it otherwise; and though they should persecute him unto death, yet he knew, and would know to his latest breath, that he had both seen a light and heard a voice speaking unto him, and all the world could not make him think or believe otherwise.

Joseph’s testimony of his experience was sure and undeniable. That early assurance created a necessary foundation for all that would lie ahead for him in his life. Do you have a testimony of which you could say, in the face of storms of hatred and mocking and harassment, “I could not deny it”?

Prophets in our day have told us that we too will need that kind of sure foundation. The kind “whereon if men build they cannot fall.”[3] In the April 2018 session of General Conference, President Nelson testified, “In coming days, it will not be possible to survive spiritually without the guiding, directing, comforting, and constant influence of the Holy Ghost.”

Our spiritual survival depends on us cultivating the type of testimony that we cannot deny. But we can’t wait for a personal, divine visit like Joseph had. Laman and Lemuel saw angels and yet they denied their God again and again. On the other hand, all of the three witnesses of the Book of Mormon left the Church at some point in their lives and yet, not one of them ever denied their testimony or the experience of seeing the gold plates. Seeking and receiving revelation you can be certain of, is not as simple as awaiting a heavenly visitor. But it does come with making the Holy Ghost a heavenly, constant companion.

It is stunningly powerful for any of us to obtain a testimony so strong that no matter what persecutions may rage, we can say like Joseph, “I could not deny it.” But that is what we should be striving for. And the Lord is anxious and willing to help us on the path to that certainty, if we are only willing to humbly seek his aid.

Have you and your family finished the puzzle? I want to see a picture! Post it on social media and tag me: @mariahproctor or tag it with #TreasuresPuzzle.

I just listened to "The Profile of a Prophet" in Hugh B. Brown's own voice and it touched me to my very soul!! I am so grateful for him and all the church leaders who have shared their testimony of The Book of Mormon, Joseph Smith and the restoration. It's true.

Our family has completed TWO puzzles....well, I completed the first 80% of two different puzzles and then at two different family gatherings, my grandchildren helped complete the last 20%. I did find that for the last 100 pieces, family excitement and eagerness to spend time searching for a match gradually drew in young kids, teens, and even parents and visitors. I suggest to all that they keep that in mind and don't let difficulty of the first 80% restrain you from pursuing the puzzle. With regard to this description of a youth with conviction, I appreciated the depth of the discussion around such a challenge for Joseph or any young teen. We hope each of our descendants can build up the same reservoir of conviction. It's not even too late for us to do the same!