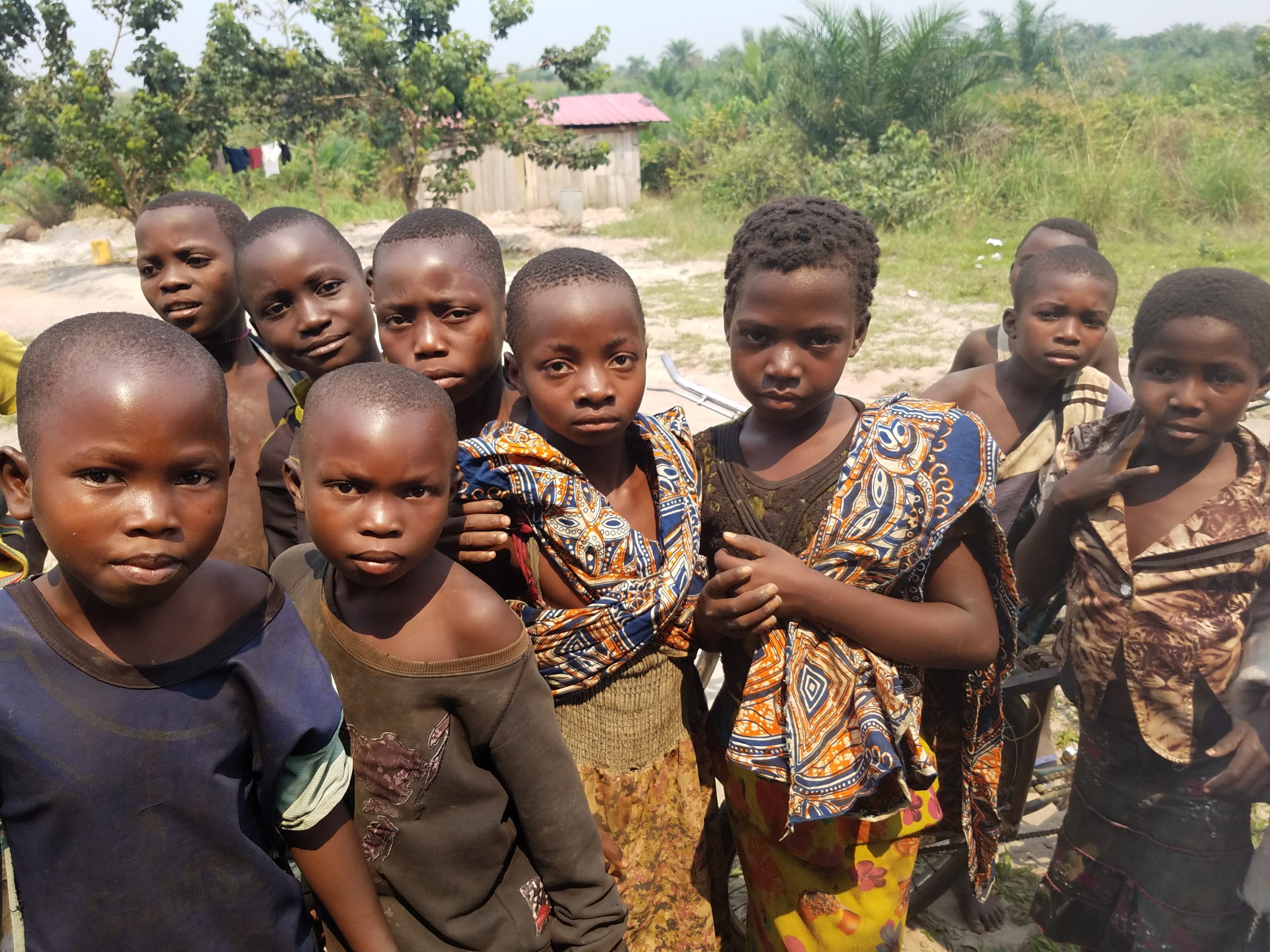 Heart of Africa: “You’re Not Finished—watch what God does”

This series, Heart of Africa, is about a forthcoming film and the failures and miracles which marked its path to production and release. It is a triumphant story which testifies of patience, persistence, and divine design. To read the previous installment, CLICK HERE.

As I stood next to Tshoper Kabambi while he filmed the Lokenya River in Lodja, DR-Congo, I was amazed by the beauty of the place, and also by what we had gone through to get there. We had accomplished our goal. Tshoper was filming b-roll for the Heart of Africa movie, which was nearly finished. It was April, 2019, and we had just witnessed the reunion of Tshoper’s mother with the family she hadn’t seen in forty years.

Now we were wrapping the film which was the reason we had met five years earlier. Back then, in 2014, Aime Mbuyi, a former revolutionary who became a missionary for the Church of Jesus Christ of Latter-day Saints, had introduced me to this brave filmmaker in a country without cinemas. Aime’s story had inspired the screenplay for Heart of Africa, but none of us knew how intermingled our lives would become as we made the film. In 2014, I certainly didn’t sense that Tshoper would become our director. The film’s turbulent and ultimately miraculous journey soon made that choice inevitable, though—and clearly right.

Desmond Tutu tells a story about the far-reaching consequences of Apartheid in his own life. He sometimes laughs when he describes the day he recognized his own biases. He was flying from Nigeria to South Africa and happily noticed that the pilot and co-pilot were black. Given the ways Bishop Tutu had fought for the dignity of blacks throughout Africa, it was a triumphal moment. Black men were in the seats traditionally occupied by whites. But when turbulence struck, the bishop had the horrifying thought, “Hey, there’s no white men in that cockpit. Are those blacks going to be able to make it?”  (The anecdote is told by Bishop Tutu in several interviews easily found online.) He realized that even he—despite all he had done and all he stood for—had some prejudice against his own people, the very ones he had worked to liberate and elevate.

I thought of Bishop Tutu several times as I made the decision to ask Tshoper to direct Heart of Africa. Before I could come to that decision, however, I had to recognize the boundaries of my comfort zone.  I had to realize that I had an assumption that Americans make the best films, so—even though our film was set in Africa and involved an African story—I had envisioned an American team doing it. In fact, we had a great American film team, and we all went to the Congo.

As the American team members observed the beautiful but impoverished country, they decided that it would be impossible to shoot a movie there, given the lack of infrastructure.

We flew to South Africa where we observed a South African team making a movie with all of the expected support: trailers, catering, outstanding equipment. I, realizing that the other team members knew more about film than I did, went along with their view of things—up to a point. Eventually, though, we came to an impasse. The details aren’t important, but the epiphany which came after the impasse is.

It all fell apart. The American film team dissolved and the Heart of Africa project was, by all appearances, lost.

The day after the project’s apparent failure, I served in the Provo City Center Temple. There, I contemplated the reality of the situation—that this film no longer had a supporting team to give it life, that the work I had done for four years was for nothing, and that I ought to abandon hope. It should have been a time of despair.

Amazingly, though, it wasn’t. For hours in the temple, I felt that gratitude was being poured into my soul. I was being anointed with hope in the very hour when hope seemed unrealistic, even absurd. But there it was. I was smiling. Every cell of my body was full of thanksgiving. In my mind were the words, “Did you think you were finished? You’re not finished. This project is not finished. You don’t realize what you’ve learned. Now watch what God does.”

It took a bit longer before I made the decision (along with my husband) to “go all Africa”—and fund a film made in a country without the infrastructure American filmmakers would deem essential. I had met Tshoper and had seen several of his short films. I found him extraordinarily gifted. This would be his first feature, though, and it would require more of him and his team than anything else he—and they—had ever done. The cast, including all extras, would number more than fifty. And equipment? Well, we would supply that. It would be one of the greatest acts of trust I had ever done. My trust would be well-rewarded.

I am out of money, but I have faith in God, and I know that God is helping you and all you are doing. Now I need to ask you an important question. Would you read a screenplay I’ve written and, after you are content with it, would you be the director? I won’t ask you to direct unless you feel good about the screenplay. This will involve three American actors as well as many Congolese ones. We can talk later. There is no one I would rather have direct this film than you.

And thus, we began. We committed ourselves to making a film in a country commonly perceived as being violent and corrupt. We knew of the nation’s challenges, but we also knew many of its people, and we sensed some divine urgency in what we were doing there. In the Congo, we lacked infrastructure, but we had passion for the film and immense talent in our Congolese team.

It would be enough.

My husband and I bought two Black Magic Ursa mini cameras capable of filming in 4K—a resolution appropriate for theatrical release. We also bought lighting and computers, and a filmmaking friend in Idaho donated a computer when his company upgraded to a newer version. We then hired American actors willing to go to the Congo. And finally, we traveled.

My brother took the cameras. When he delivered them to Tshoper, Deborah (Tshoper’s wife) said to their three-year-old daughter, “Say goodbye to your daddy, Paxy. He has a new baby now.”

It was our goal to help start a sustainable cinema industry. We planned on “Heart of Africa” opening doors to a viable business which would go far beyond one film.

As I consider what we did and how we found qualified people to work in their own country, I think about principles I learned from my co-author of twenty years, Darius Gray, an African American man who joined the Church in 1965. Darius understands that nobody comes to earth as inherently cursed or inherently blessed because of lineage. We come into circumstances which either include access to such things as employment, money, education and even spiritual gifts, or into circumstances which lack such access. In all circumstances, we are asked to keep the love of God in our hearts and to share what we have with others—whether what we have be spiritual or material. Darius imagined us being called to our Father in Heaven prior to our mortal sojourn and receiving instructions like these:

To someone assigned to birth in Africa:
You will go to a place where division and tribalism are rife. You will have little in the way of material possessions, but you will have great gifts of family cohesion and a culture of joy and sharing. Your spiritual gifts will let you know that you are my child and will prepare you to receive all truth.  The divisions you’ll encounter will come with temptations to envy what others have. Your challenge is to maintain the love of God in your heart and to not yield to these temptations. Instead, you must share your spiritual gifts with others and recognize and value the good in your culture.

To someone assigned to birth in the USA:
You will go to a wealthy place where education is easy to get. However, you will be tempted to be prideful and selfish. As you receive access to the privileges of your birthplace, you are tasked with maintaining the love of God in your heart and opening access to those who lack it. You can open access to education, to industry, to all blessings. The way will be shown to you if you are willing to see it and follow divine direction.

Darius claims that the challenges in both circumstances are actually equal.

Of all the things I learned in my twenty years of working with him, this is the most important—that I have a moral duty to share what I have, including my access to various opportunities with those who don’t have it. Only as I do so can I work towards blessing all of God’s children. This is the essence of the Law of Consecration. I will not solve global problems, but I can open doors for others who will thereafter help those in their own spheres. In so doing, I also receive the gifts (usually spiritual, not material) from those whom I serve. Thus, I may learn to love with increasing depth, letting God enlarge my heart until it, like Enoch’s, is “wide as eternity” (Moses 7:41).

I also came to recognize that our births, regardless of where they happen, open particular possibilities and privileges. As I worked in Africa, I encountered many people who had had dreams and visions—including Tshoper—leading them to faith and growth.  I did not find a similar frequency of dreams and visions among my American friends, but I did find something remarkable. As I worked with other humanitarians in the USA, I found many who understood that the call to “go ye into every nation” was not casual but an assignment to share the most precious things we have with everyone throughout the world. This includes but is not limited to the gospel.

When I saw a final cut of “Heart of Africa,” I recognized that our African team had particular access to people and scenery and a knowledge of picturesque locations which no American team had. Audience members in pre-release screenings in the USA said that they felt transported to Africa as they watched the film, that they were surprised to find themselves still in America when the lights came up.

For me, the film became a perfect template for cultural cooperation. We facilitated and fueled a team which then created a work of art beyond anything we could have accomplished on our own. The little things we had done to empower them returned to us transformed into something which, we fully believe, will bless the whole world.

Thank you for sharing this beautiful story and the insights you've gained. I can hardly wait to see the film.