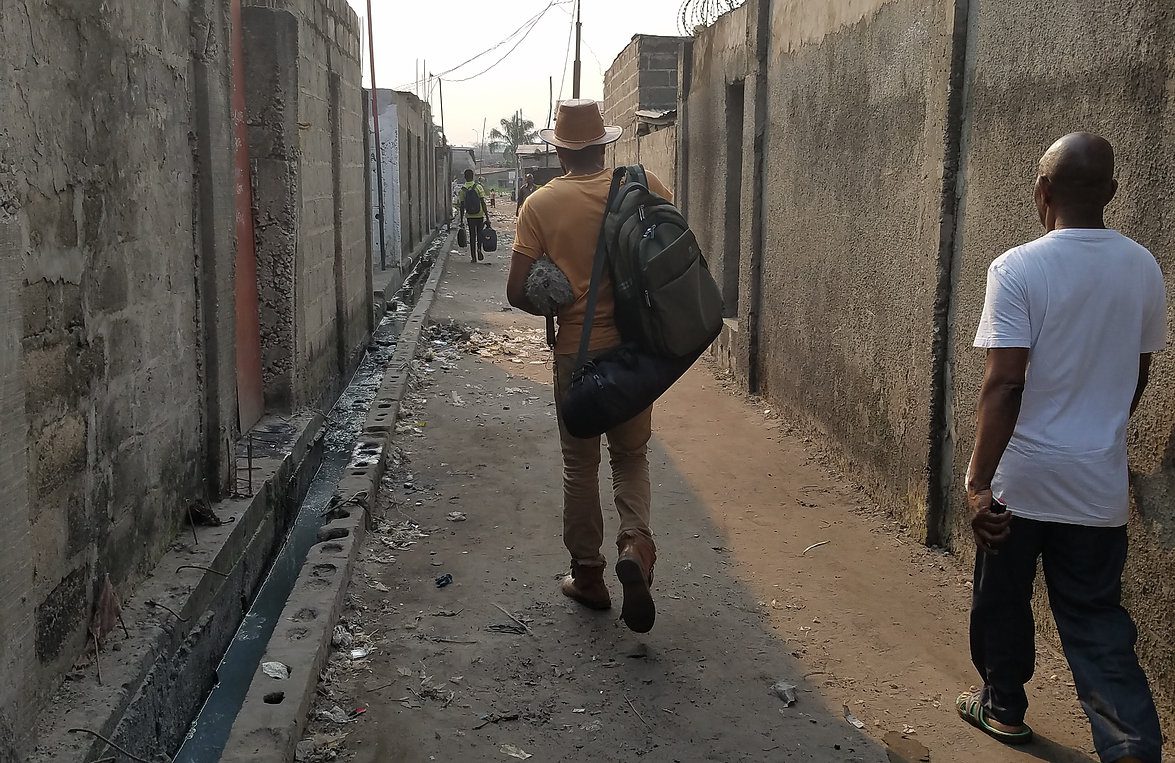 Heart of Africa: What Three Days in Jail Can Do to a Dream

The following is part three in the Heart of Africa series. To see the previous installment, CLICK HERE.

Cover image: Tshoper and his dad.

Heart of Africa is a film with a cause. Based on the story of a former revolutionary in the DR-Congo who became a missionary for the Church of Jesus Christ of Latter-day Saints, it is a tale (with fictional liberties) of self-discovery, brotherhood, and redemption. The producers have an additional objective in making and screening this film in the Democratic Republic of the Congo before it screens in the USA. It is one of few if not the only feature film made by a fully Congolese team in the Congo. When audience members in the DRC see it, it will be the first time most have seen a film in any sort of movie theater, and certainly the first made by their compatriots in their own country.

In many communities where it will screen, it will be the first movie any in the audience has seen. This film will offer a communal dream, not the isolated viewing of a dubbed film for those who can afford a laptop computer. The filmmakers aim to help establish the film industry in the DR-C and to build simple cinemas which can also be used as schools in the poorest communities there. Film can reach into places where humans won’t go for years. Heart of Africa will do exactly that.

It was an exciting day for Tshoper Kabambi, the first of using a rented camera to actually film something. He had studied the techniques using online sources and finally had a camera in his hands. Having his own camera was a possibility only in his dreams, of course–the cost was exorbitant. But this rented camera was real and it worked.

He went into a field to film beauty shots near Kinshasa, DR-Congo for his project, an assignment he was fulfilling for a program he himself had initiated at the National Institute of Arts.

He saw the policeman coming and knew that he would be expected to pay a bribe. Policemen are terribly underpaid in the Democratic Republic of the Congo and soliciting bribes is almost expected in the job. Tshoper, age seventeen at the time, did not have a permit to film.

The policeman demanded the permit. Tshoper replied that he was a poor ­student completing an assignment. He didn’t have a permit and he didn’t have money.

As expected, the policeman arrested him. Tshoper was taken to jail, the rented camera and his phone confiscated. He had no way to let his parents know what had happened to him or where he was, nor did he have any idea of when he might be released—if ever.

The first thing he noticed in jail was the smell. Prisoners were taken to designated areas to relieve themselves only once a day. The cell stunk so strongly that it made him nauseous. Beyond that, Tshoper’s cellmates were common criminals—thieves and bandits who’d do anything for a dollar. He was no criminal but the son of hard-working, deeply religious parents. His ethics were solid and his dreams lofty. But in this place, nobody knew him. He couldn’t defend himself or call anyone to his aid. He slumped against a wall in despair. How strange that only hours ago, his hope for the future was as high as it had ever been.

In this unthinkable setting, he made a rash decision. He gave up.  He renounced his dreams. He would not pursue filmmaking. No imaginary career in a fantasy future was worth this. Despondent, he sat for hours, listening numbly to the vulgar talk of his cellmates. No, his dreams weren’t worth the risk. And what if he died in this jail after years of confinement—without anyone but the guards knowing where he was? What good did noble dreams do to a corpse? He stared at the dirt floor.

On the third day, an official visited. As it turned out, he was the uncle of one of Tshoper’s friends. Finally, Tshoper was released. The trauma of his days in “the container” had dimmed his hopes, though, and it felt like permanent damage.

Head bowed in humiliation, he walked to his home, certain that he still smelled like the jail. Once arrived, he could only bring himself to murmur monosyllables when his parents asked where he had been. He went into his room and lay down on his bed, not moving for hours. How could he ever forget the three days in that dungeon? How could he revive even a modicum of hope?

A few days later, he announced to a friend that he was giving up. “I don’t want to make movies,” he said. “That was a childish wish.”

The friend, Doudou, gave him a stunned look. “You’re giving up?” he said.

“But making films is your calling! It’s all you’ve talked about since we were children!”

“I’ll find something else.”

Doudou took in a deep breath. “Tshoper,” he said. “What would you be without film? What would you do? There is nothing else. You are a film maker. This is your destiny!”

Tshoper let the words settle. He shook his head, but he had been moved by his friend’s determination.

It would take weeks before he could forget his days of horror in that jail, and the nightmare he had fallen into. But he also had the memory of another dream, a time when it seemed that he had left his body, when he had somehow gone beyond the roof of his home and into the stars, where he could survey all of Kinshasa as though it were a toy village. In that setting, he was fetal but aware of everything. A divine hand reached for him and held his arm tightly. No words were spoken, but the message was clear. God was supporting him in that lonely night. God knew him.

He returned to his body shortly thereafter, but could never really describe what had happened to him. He would always remember that vivid dream—or was it a vision? It seemed more real than any reality he had known.  God had a purpose for him.

Tshoper was poor, the son of a laborer and a chief’s daughter who had married the man she loved despite his poverty, and had then shared a humble life with him. Tshoper was one of eleven children raised by this couple who both worked all hours to pay for education for their sons and daughters. Education is not free in the Congo, and those who can’t afford it simply do not receive it. His parents had given up sleep and their own needs to be sure each of their children got an education.

Albert Kashala, Tshoper’s father, had been cheated out of his own education. As a young man, he had been offered a scholarship to study in Belgium, but someone who had access to the records had put his own son’s name in the place of Albert’s. The promised education never happened, and Albert worked graveyard shifts to make ends meet. When Tshoper had told him years earlier that he wanted to make films, Albert had encouraged him to do whatever he wanted.

Now, after his awful days in jail, Tshoper had another conversation with his father. Albert knew all about betrayal and solitude and hopelessness, but he also knew about faith. He told his son how things had been thirty years earlier in Kinshasa before the cinemas closed. There were three movie theaters which he could remember, and he saw films every week. “Tshoper,” he said, “I wanted to be a filmmaker, too. That was my dream. You will do it for both of us.”

His resolve set, Tshoper returned to school and finished his first movie. It was not a particularly good movie, he confesses, but it was an essential part of his education.

The failures, the moments (or days) of despair, the threats to the future were all a part of his path to the peaks where his dreams led.  More important, he knew that he had friends and family who were cheering him on. And he knew that God was with him, and meant him to do something important.