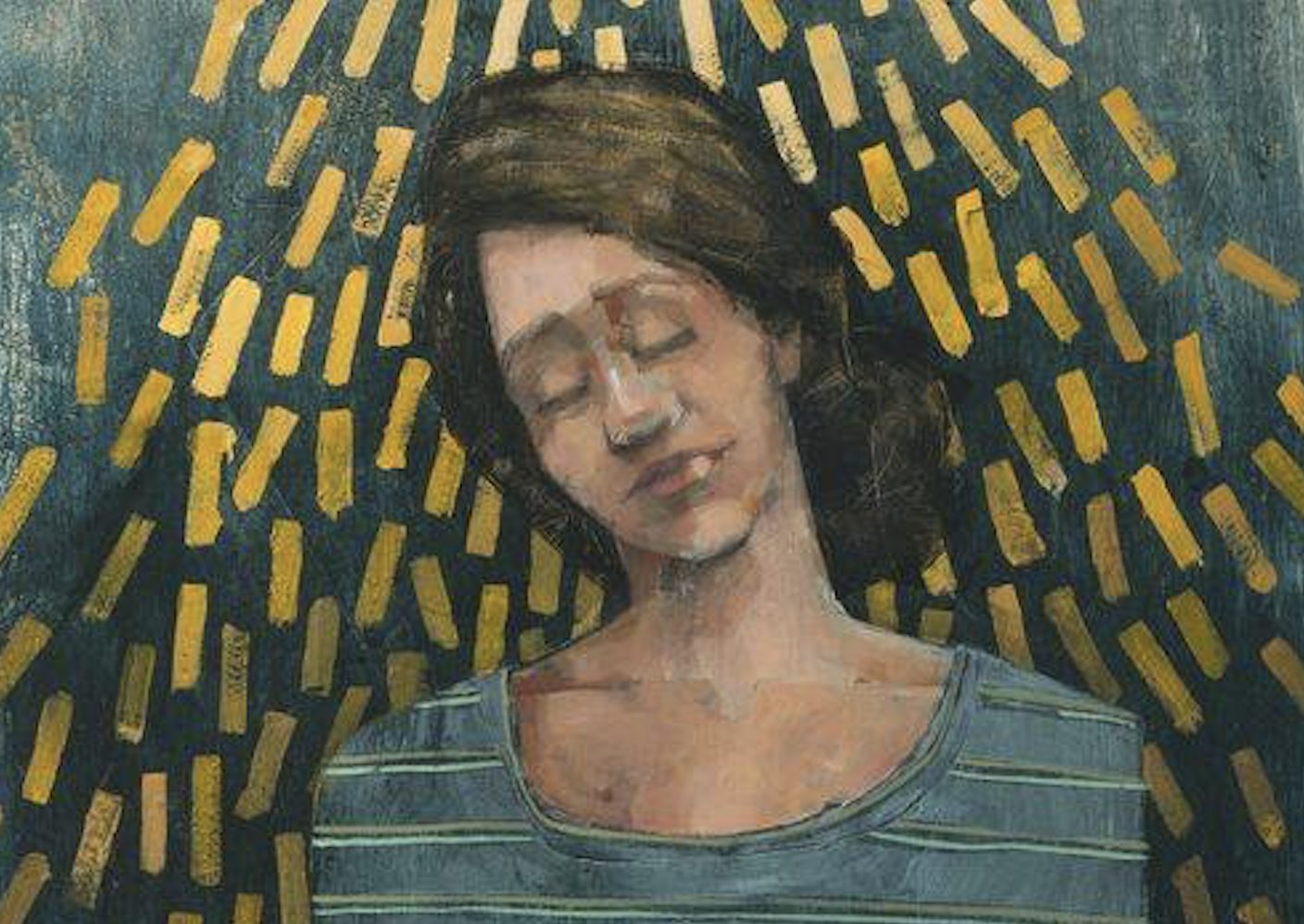 Hearing and Heeding the Spirit’s Voice

Cover image: “A Woman Who Listens” by Caitlin Connolly.

Because we don’t completely comprehend God and His methods of loving us, we don’t always perceive His private instruction.  When we tune in to the Spirit’s Voice, we will hear declarations of support, tenderness, knowledge, and even warning. Are we listening?  Are we heeding?

Several years ago, I had just moved to a new area, and about the second or third Sunday, I heard the Relief Society President mention a woman named Rena whose husband was going to have surgery, but because I hadn’t met her, I promptly forgot it.

About 2 weeks later, I heard a piercing voice in my mind suddenly saying, “Bake bread now and take it to Rena, at 5:00 today!” In the back of my mind the name was semi-familiar, but I couldn’t really place her among my new acquaintances.  Then it suddenly dawned on me that this was the woman cited in the meeting.

After I baked the bread, I looked up Rena’s address and discovered she was not too far from where I lived.  I arrived right at 5:00 p.m.  I knocked, and after a few minutes, in the doorway, a very pale and exhausted woman appeared.  When she saw me, an unknown person with bread in hand, she was amazed.

She had only just returned home from the hospital where she had been all day with her recovering husband.  She was tired, discouraged and ravenous! I told her that for some reason I had been prompted to come there right at 5:00 with bread.  She burst into tears!  It meant so much to her that someone she didn’t know had received a prompting from God for her!  She was running on empty physically and spiritually, and to know that God knew her schedule and had sent someone to her at that specific moment, was beyond a blessing to her, as it was to me.

The Spirit knows our immediate futures and therefore knows how to bless us with whatever we need. His insights and timing are always remarkable.

When she was about 16 years old, Kara Northrup was getting ready to go to Girls Camp as a YCL (youth camp leader).  As she was packing her things for camp, she felt the spirit prompting her to “bring an extra pillowcase.”  What a strange request, but she did it.

At camp, some older girls were horsing around and stole all the girls’ pillows and put them in the boys’ bathroom.  When the pillows were discovered, Kara’s was on the bottom of the pile, touching the damp dirty bathroom floor.  Yuck!

How wonderful that she was able to pull out her clean pillowcase and put it on that night.  She felt so loved that she would be warned in advance to bring an extra pillowcase.  A little thing, but it meant the world to her.[i]

Sister Wendy Nelson made an enlightening statement when she said, “…I have come to realize that when I have impressions expressed in a way much different from the way I express myself, I need to pay attention…that is likely an indication that the Holy Ghost is carrying that particular message to me.”[ii]

When we notice an unusual request coming from “out of the blue,” we need to pay attention. It may be a voice that needs to be heeded right away…

Greg Hill was in Mesquite, Nevada a few months ago on a golf trip with his friends. He was in his car getting ready to get out when a car pulled up behind him and waited for him to get out. When he got out of his car a man approached him and explained that his son lived in St. George and was having car problems. He asked Greg if he would be willing to drive with him to St. George and then drive his son’s car back to Mesquite.

Greg thought to himself, “I have some free time right now, and it would be nice to help this man.” He initially told the man that he would help, but as he started to get in the man’s car he heard an audible warning in his mind that simply said, “DO NOT GET IN THAT CAR!”

With no hesitation, Greg immediately hearkened to that voice and told the man that he had changed his mind and wouldn’t be able to help him. He never knew what would have happened if he had accepted.  He could have been in an accident, robbed or even killed, but by trusting the spirit he felt strongly that he did the right thing and was protected by listening to the Voice. [iii]

The Spirit Voice Can Tell Us What to Say

The Spirit not only can articulate to us what to DO, it can also tell us what to SAY at times.  Elder James E. Faust shared an interesting experience he had when he was a boy.  He wrote:

“I learned at a young age that inspiration can come to any of us. When I was in junior high school I was taking a difficult class where most of what was being taught went over my head. One day the teacher asked me a question. I didn’t understand the question, let alone the answer. Out of nowhere, a response came into my mind, which I repeated to the teacher. It was the right answer, but I knew it had not come from me.”[iv]

When we follow the promptings, we are always blessed.

Listening to What IS NOT being said

Sometimes while our physical ears are hearing one thing, our spiritual ears are being spoken to by the voice of the spirit on a completely different topic.

In “An Evening with a General Authority, Elder David A. Bednar talked about inviting the Holy Ghost to be our teacher. He told about a missionary meeting he attended where he posed the question, “What are you hearing that is not being said?” He said that he was absolutely “dazzled” by one young missionary’s response to that question. Elder Bednar explains,

“An 18-year old missionary who had only been in the field for four weeks, said, “If I hear it in your voice or the voice of another missionary, that’s a message for

everyone.  If I feel it in my heart, or have a thought in my mind, that’s from God and that’s just for me.” [v]

Case in point, the following story exemplifies this principle.

Get your House In Order

A couple of years ago, Rose Morales went to a Relief Society meeting that changed her life.  The lesson was on being spiritually prepared, but what Rose personally heard was something very different.  She was told by the voice of the spirit in that meeting that she needed to get out of debt and to get food storage.  When she told me about it, I was baffled, because I heard the same lesson, and the topic didn’t includethose things.

After the meeting, the spirit kept nudging Rose in a certain course of action.  She said, “What I should do got in my head and would not let me be!”

Every month I’d go visit her as her minister, she would delightedly report where she stood in her goal, and finally last January, she told me she paid off her mortgage, all credit cards and had stockpiled food.

Truth is that when Covid 19 hit, several members of her family and friends had to have governmental help to make ends meet, but Rose didn’t need any help. She knew she was specifically blessed because she paid attention to the Spirit’s specific Voice.  She now feels a new respect and interest in her beliefs from her family.[vi]

God knows the end from the beginning and knows exactly what we need at any given time.  That is information we can use…

Do Whatever it Takes

President Nelson has continually stressed the critical importance of listening to the voice of the spirit.  Last conference he repeated what he has said before,

The Holy Ghost is a member of the Godhead that can reveal ALL things to us. I love what Elder Bruce R. McConkie taught about this concept.  He said,

“…the revelations and visions of eternity… are around us all the time…The vision of the degrees of glory is being broadcast before us, but we do not hear or see or experience because we have not tuned our souls to the wave band on which the Holy Ghost is broadcasting.

“The Comforter knoweth all things; – and he is broadcasting… all the knowledge and wisdom of God, out into all immensity all of the time.

“How this is done we do not know.  We cannot comprehend God or the laws by which he governs the universe. But that it does happen we know because…when we attune our souls to the Infinite, we hear and see and experience the things of God.” [viii]

The Spirit’s Voice is God’s intimate voice to us, and when we pay attention, it can tell us to deliver food, to get out of the danger, what to say, how to get out of debt or can even give the sweet prompting to bring a spare pillowcase.  There is nothing more important than we can be doing now than attuning our souls to that Infinite Being so that we hear His Voice! Are we listening?

After reading your article, I pray that I’ll be susceptible to the whispering of the still small voice. Thanks for the experiences.

Communications from the Spirit may come to us in many ways. It is part of our responsibility as we journey through life to learn to 'hear' in any way that the Spirit may chose to communicate with us.