Has the Location of Nephi’s Bountiful Been Discovered? | Meridian Magazine 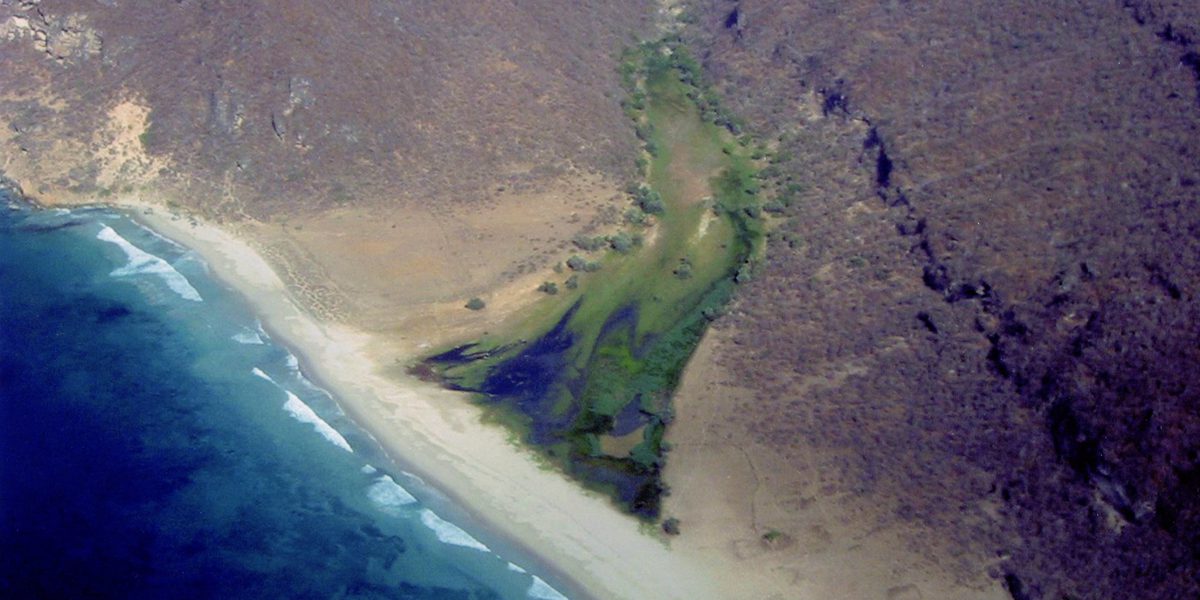 Has the Location of Nephi’s Bountiful Been Discovered?

And we did come to the land which we called Bountiful, because of its much fruit and also wild honey; and all these things were prepared of the Lord that we might not perish.
1 Nephi 17:5

After journeying in the wilderness for the “space of many years,” Lehi and his family eventually came to a coastal region which they “called Bountiful, because of its much fruit and also wild honey” (1 Nephi 17:4–5). This location not only served as a refuge from the harsh desert landscape, but also as a place where they could build and then launch a ship toward their “promised land” in the New World (1 Nephi 18:23).

Many people have rightly wondered if such a coastal paradise ever existed in the Arabian Peninsula.[1] As early as 1950, Hugh Nibley proposed that Bountiful could plausibly be located in the Qara Mountains of southern Oman, in what is known as the Dhofar region.[2] He based his suggestion on an early explorer’s account of “seaward slopes velvety with waving jungle, their roofs fragrant with rolling yellow meadows.”[3]

It wasn’t until 1976, however, that this region’s first LDS explorers—Lynn and Hope Hilton—sought to verify a specific site for Bountiful in their groundbreaking, though brief, trek into Oman.[4] Since then, a number of LDS explorers and researchers have surveyed Dhofar’s coastal inlets. In 1994, Warren and Michaela Aston published a set of 12 logical and scriptural criteria (see chart)[5] needed to identify Bountiful’s location in the real world, based on a careful reading of Nephi’s statements.[6] After exploring and evaluating all the coastal inlets in the region, the Astons concluded that Wadi Sayq (“River Valley”) and its opening near the ocean at Khor Kharfot was the best candidate for Bountiful.[7]

Some have suggested that other inlets in the Dhofar region are a better match for Nephi’s Bountiful.[8] Most prominently, George Potter and Richard Wellington have argued that Khor Rori is a better fit based on what they call the crucial “maritime requirements.”[9] While these proposals have their own strengths, Khor Kharfot remains the best candidate in the eyes of many Book of Mormon scholars.[10]

Consistent with Nephi’s description, Khor Kharfot is “the most fertile coastal location on the Arabian Peninsula with abundant freshwater, large trees, fruit, and vegetation.”[11] Its natural resources satisfy Nephi’s description of “much fruit and wild honey” (1 Nephi 17:5), as well as the need for substantial timber to build a ship.[12] Kharfot also features a prominent mountain (1 Nephi 18:3),[13] with steep cliffs from which Nephi’s brothers could have menacingly threatened to throw him into the “depths of the sea” (1 Nephi 17:48).[14] Geological surveys have discovered that smeltable ore (1 Nephi 17:9–10) lay practically exposed at the surface of the earth in Kharfot and nearby locations.[15]

All told, Khor Kharfot fittingly complies with the numerous textual details contained in Nephi’s account, and it, along with the rest of the Dhofar region, just happens to be a long journey “nearly eastward” (1 Nephi 17:1) from the now archeologically-attested location of the “place which was called Nahom” (1 Nephi 16:34).[16]

Regardless of which specific inlet was Lehi’s campgrounds, Aston stressed, “Researchers generally agree that Nephi’s Bountiful must lie somewhere on the fertile southern coast of Oman.”[17] Aston even felt “that several locations (all within a few miles of each other) being proposed as Bountiful actually strengthens the Book of Mormon’s claims” because, “None of these places was known in Joseph Smith’s 1829 environment.”[18]

After years of research and exploration of possible Book of Mormon sites, Aston has concluded that when important scriptural locations are “anchored in the real world, we can re-read the scriptural account with heightened appreciation for the story being told and its applications to our own life journey.”[19] This is certainly true for Bountiful and its certain identification within Dhofar, most likely at Khor Kharfot.

Nephi described this area as being “prepared of the Lord that we might not perish” (1 Nephi 17:5). The full significance of this statement is meaningfully driven home by the first-hand accounts of explorers who have stumbled upon the region from the scorching desert inland. Bertram Thomas, for example, was greatly delighted when he “suddenly came upon it all from out of the arid wastes of the southern borderlands.”[20] Concerning Wadi Sayq in particular, Aston has explained that the “vegetation inside the wadi changes from pure desert to scrubland as the coast is approached, climaxing in a remarkable concentration of lush vegetation and trees in the final two miles.”[21]

The variety of fruits, the wild honey, the fresh water, the large trees for shipbuilding, the accessible ore for tools, the prominent mountain for prayer and worship, the ancient bay for launching the ship—all these divinely prepared blessings become more readily apparent and appreciable to those who have contrasted Dhofar’s “thin green band of trees, flowers, and grass” with the surrounding desert.[22]

Pondering upon such a scene can evoke not only a deep gratitude for the Lord’s providence, but also a recognition that He is aware of His children and is prepared to meet their needs. Lehi’s family had obediently left their land of inheritance. Nephi and his brothers had risked their lives to obtain the plates of brass. Ishmael and perhaps other loved ones died during their trek. In their years of travel, they all faced near starvation, desolate desert landscape, and certainly a number of untold trials. Yet as a resting point before their final destination, the Lord prepared a veritable coastal paradise which adequately blessed them with everything they needed to complete their journey to the promised land.[23]

A similar refuge has been prepared for all those who faithfully press forward through the trials and hardships of mortality. Alma described it as “a state of happiness, which is called paradise, a state of rest, a state of peace, where they shall rest from all their troubles and from all care, and sorrow” (Alma 40:12). This heavenly harbor will provide an ideal resting place for the souls of the righteous while they prepare for the final destination of their own journey—eternal life in the celestial kingdom of heaven.

Bountiful is more than just a place. It is an apt symbol of the Lord’s divine providence, His tender mercies, and His preparations unto the children of men. Wherever it exists in the real world, Bountiful typifies the existence of heavenly realms where the Lord Himself has gone before the righteous to “prepare a place” for them (John 14:2).[24]

George Potter and Richard Wellington, Lehi in the Wilderness: 81 New, Documented Evidences that the Book of Mormon is a True History (Springville, UT: Cedar Fort, 2003), 121–162.

[1] See, for example, Gimel, “Book of Mormon,” The Christian Watchman 12, no. 40 (1831): “To believe the book of Mormon, we must suppose that these emigrants traversed almost the whole length of the Arabian Gulf … and that they discovered a country almost equal to paradise, where no body else can find any thing but a sandy, barren desert.” Warren P. Aston has found that critics have been making similar claims as late as 1985, and that despite being “based on usually-authoritative sources such as the Encyclopaedia Britannica and the Encyclopaedia of Islam,” they have been, “completely wrong.” Warren P. Aston, “Beginnings: The Discovery of Nephi’s Bountiful,” Meridian Magazine, April 11, 2014, online at latterdaysaintmag.com.

[8] The Hiltons initially favored the spring Ein Arzat, located in Salalah. See Hilton and Hilton, “In Search of Lehi’s Trail—Part 1” and “In Search of Lehi’s Trail—Part 2,” online at lds.org. Wm. Revell Phillips has argued for Bountiful being located at Mughsayl. See Wm. Revell Phillips, “Mughsayl: Another Candidate for Land Bountiful,” Journal of Book of Mormon Studies 16, no. 2 (2007): 48–59, 97.

[11] Aston and Aston, In the Footsteps of Lehi, 43. It is notable that Khor Kharfot has attracted sustained attention from non-LDS researchers, who have been impressed with its unique plants and animals. Even the name of the inlet, Khor Kharfot, is itself linked to the name given by Lehi’s party. See Aston, “Why Arabia’s Hidden Valley is the Best Candidate for Bountiful,” online at latterdaysaintmag.com; Warren P. Aston, “Did Anyone Else in History ever Mention Nephi’s Bountiful?” Meridian Magazine, February 24, 2016, online at lds.org.

[13] See Aston, “The Arabian Bountiful Discovered?” 10: “Fittingly, at Kharfot the highest and most prominent peak is isolated directly above the little western plateau where evidence of former settlement is most abundant and on which Lehi’s family would have been most likely to camp.”

[17] Aston, “Identifying Our Best Candidate for Nephi’s Bountiful,” 58. David A. LeFevre, “We Did Again Take Our Journey,” Journal of Book of Mormon Studies 15, no. 2 (2006): 65 wrote: “The thin green band of trees, flowers, and grass along the Dhofar coast of Oman is not just the best choice for the group to locate while Nephi built his ship, it is the only choice.” S. Kent Brown, Voices from the Dust: Book of Mormon Insights (American Fork, Utah: Covenant Communications, 2004), 46 also concluded: “The ultimate destination, whether known to the family or not, was the Dhofar region in the south of modern Oman. It constitutes a botanical anomaly in Arabia, a virtual Garden of Eden during the rainy season. No other region, north or south, matches even remotely the Bountiful described by Nephi.”

[23] No doubt, with all this in mind, the Nephites later gave the name of Bountiful to another choice place by the sea in the New World, where the resurrected Savior would appear to many at the temple there.

[24] When Nephi recorded his family’s journey on the small plates of Nephi, he often used narrative symbolism and literary allusions, especially to the Israelite exodus. And like the exodus itself, the journey of his family frequently symbolized the journey that each individual makes toward eternal life. For examples of Nephi’s use of literary allusion, see Terrence L. Szink, “Nephi and the Exodus,” in Rediscovering the Book of Mormon: Insights You May Have Missed Before, ed. John L. Sorenson and Melvin J. Thorne (Salt Lake City and Provo, UT: Deseret Book and FARMS, 1991), 38–51; Ben McGuire, “Nephi and Goliath: A Case Study of Literary Allusion in the Book of Mormon,” Journal of the Book of Mormon and Other Restoration Scripture 18, no. 1 (2009): 16–31. It may also be notable that Bountiful, a location with a prominent mountain where Nephi went pray often and receive revelation, acted as a sanctuary from the desert. In this sense, the location of Bountiful may hold meaningful relationships with Mt. Sanai, where Moses received revelation for his people. See Donald W. Parry, “Sinai as Sanctuary and Mountain of God” in By Study and Also by Faith: Essays in Honor of Hugh Nibley, Volume 1, ed. John M. Lundquist and Stephen D. Ricks (Salt Lake City and Provo, UT: Deseret Book and FARMS, 1990), 482–500.

What is archaeology show? They will be slag refining ores. Slagged does not just up and disappear over time. Also, remember that landscapes change over time. What exists now, may I may or may not have been there 25 to 2600 years ago. In fact, what may have been green and lush when the Lehites or there may now be underwater or may have become desert. Reflecting on the way things look now when dealing with antiquity is the mistake many people make .