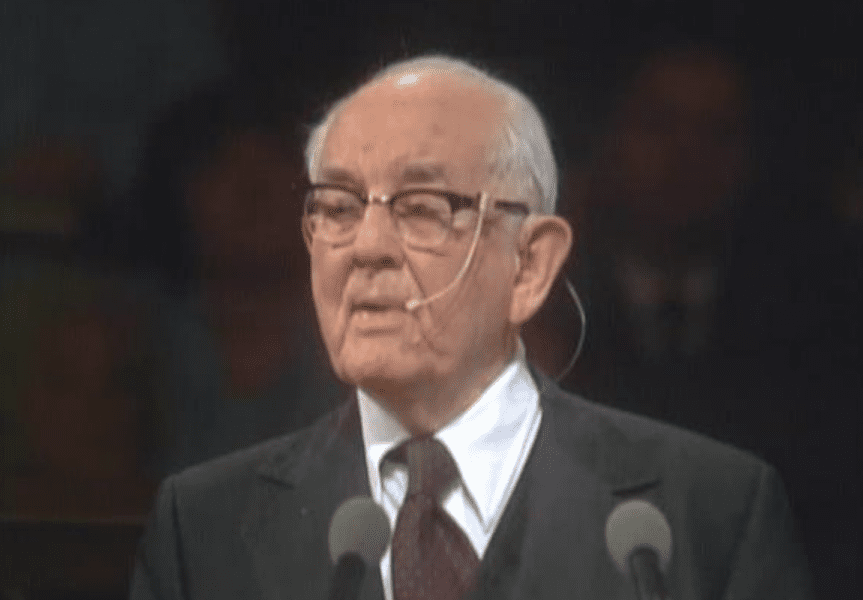 Forty-Year-Old Conference Messages that Speak to Our Day

This post is part of the General Conference Odyssey.

This week we’re starting with the first session of the October 1980 General Conference, and I can’t pick just one talk to write about. I have to quote from two and mention at least one more.

President Kimball’s Families Can be Eternal is another one of those talks that hammers home how central the family has been to the Church’s mission since before I was born. This may come as no surprise to most of you, but before starting the General Conference Odyssey one of the things I’d heard was that the Church’s focus on families was a recent development, and that in decades past the emphasis had been on home (rather than family) or even other things altogether.

From the beginning, The Church of Jesus Christ of Latter-day Saints has emphasized family life. We have always understood that the foundations of the family, as an eternal unit, were laid even before this earth was created! Society without basic family life is without foundation and will disintegrate into nothingness.

Therefore, whenever anything so basic as the eternal family is imperiled, we have a solemn obligation to speak out, lest there be critical damage to the family institution by those who seem to be deliberately destructive of it.

… many of the social restraints which in the past have helped to reinforce and to shore up the family are dissolving and disappearing. The time will come when only those who believe deeply and actively in the family will be able to preserve their families in the midst of the gathering evil around us.

I just got back from a trip to visit friends in Colorado, and during one of our airport runs, a group of us had a long, in-depth discussion about families in modern society. It was me, the Mormon, two staunch Catholics and a secularist. I’m going to write an entire post about our conclusions there, but suffice it to say all of us could eventually agree on the reality that the ideal of the family is being undermined in our society with disastrous consequences especially to the most vulnerable in society.

This is true pretty much however you conceive of vulnerability, but the two biggest ones are children and class. The rich in America–pretty much regardless of party affiliation, toe the line on socially liberal talking points while enacting conservative principles in their own family lives. As a result, the “social restraints” are indeed “dissolving and disappearing” from the bottom up. It’s a challenging time to raise a family, and I’m grateful for the clear and consistent guidance from the Church. It is as President Kimball stated:

if the supporting network of institutions does not function adequately, then we will do our part anyway.

And there’s one more thing from President Kimball’s talk that I’d like to quote:

Let your love of each member of your family be unconditional. Where there are challenges, you fail only if you fail to keep trying!

The only way to get beyond the simplified stereotypes about what the General Authorities have been telling us is to read their words for yourself. Summaries–even summaries like the GCO–won’t give you the full picture. For all of President Kimball’s stark rhetoric, the message of love is omnipresent for him as for all the Church’s leaders.

Next up, I have to mention Elder Maxwell’s talk, The Net Gathers of Every Kind. It’s an important talk because it draws such a clear line between Mormon culture and Mormon faith:

New arrivals are not asked to renounce their country or that which is good in their culture. All must, however, let go of the things which injure the soul, and there are some such things in every life and in every culture.

The workers who come to the Lord’s vineyard in the last hour will receive the same wages as the “old-timers,” who should, by the way, speak less of the good old days and work to bring about even better days.

This is a clear conceptual line, but it’s a really difficult one to draw in practice. That’s not an insurmountable problem, but it’s important to keep in mind. We should all work towards separating–in our own minds–what is culturally Mormon (and therefore contingent and in some cases even wrong and harmful) from what is essentially Mormon (and therefore eternal and good).

We’re never going to be perfectly good at applying those two categories, but if we have in mind that they exist then we can have the right attitude–an open-minded one–about accepting changes as well as other points of view. As the West continues a long, cultural decline I believe the Church will come to depend more and more on the vibrancy of stakes from around the world, especially South America and Africa. There will almost certainly be some bumps in the road as the Church of Jesus Christ of Latter-day Saints becomes less Utahan and even less American in the future, but if we have our priorities straight we will be able to accommodate them gracefully. (This paragraph, just to be clear, is my own speculation based on Elder Maxwell’s talk.)

Elder Maxwell also touched on one of those complicated contradictions that is so important to try and work through as disciples: the balance between being accepting of ourselves and making realistic, incremental goals and between becoming complacent:

The Church is for the perfecting of the Saints, hence new arrivals are entitled to expect instant community but not instant sainthood—either in themselves or in others. It takes time and truth working patiently together to produce the latter in all of us.

So, be patient with yourself and with others as we grow together and realize that “the sense of inadequacy never seems to go away.” However, this can be taken too far. Thus, Elder Maxwell also added: “Let us, therefore, not be too long-suffering with our own shortcomings.”

So those were two of the talks that got a lot of highlighting as I went through. Different talks may resonate differently with other people. There were at least a couple of talks from this session where I didn’t find a single thing to underline. I wager that other folks reading and writing in the GCO probably found a lot in some of those talks, however, and maybe not as much in the two that I chose to write about.

But, here at the end, let me mention a few of the quick thoughts on some of the other talks.

From Elder Tanner’s The Blessing of Testimony there was this simple statement:

I was not prepared to talk at all, but President Kimball asked me if I would like to say a few words.

I get nervous just bearing my testimony in front of my home congregation. I don’t even want to think about what it would be like to be asked by the prophet to bear my testimony in General Conference!

And then, from Elder Simpson’s The House of the Lord, there was this Moroni-esque statement on family and culture:

Everything in this world that is counter to a tender and loyal husband-wife relationship is a tool of the adversary. Everything that promotes and perpetuates family unity—mother, father, and children properly endowed with and motivated by the light and truth of Christ—is in harmony with the Lord’s plan for mortal man.

Compare that with Moroni 7:17 and you’ll see what I mean by “Moroni-esqu”.