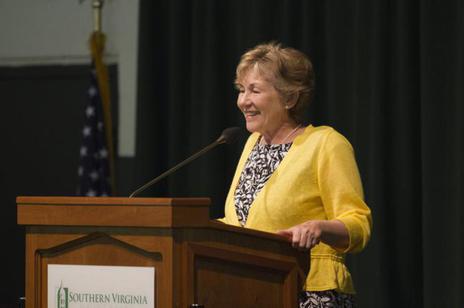 PROVO — Jenn Curtis was a self-described wreck when she walked into her first North Star meeting for Latter-day Saints experiencing same-sex attraction and gender dysphoria.

Curtis had been unable to reconcile her Mormon faith, her same-sex attraction and her 20-year marriage to a man. Today, she is happy, thriving in her faith and her marriage and servings as a vice president of North Star, which supports the doctrine of The Church of Jesus Christ of Latter-day Saints that chastity means no sex outside marriage between a man and a woman.

“I never thought this life was possible,” she said this weekend at the 2016 North Star Conference. “And it is. I’ve lived it now. I’ve demonstrated it. Now I’m trying to give back to a community that told me I could have a happy life.”

Curtis was one of nearly 600 who gathered at the Provo Marriott to share their stories and listen to speakers like Virginia Hinckley Pearce, a former member of the LDS Church’s Young Women General Presidency, and celibate Catholic blogger Eve Tushnet, who described ways celibate believers with same-sex attraction and gender dysphoria can find pathways to joy and happiness in their faith.