For Such a Time as This: How Angels Shape History | Meridian Magazine 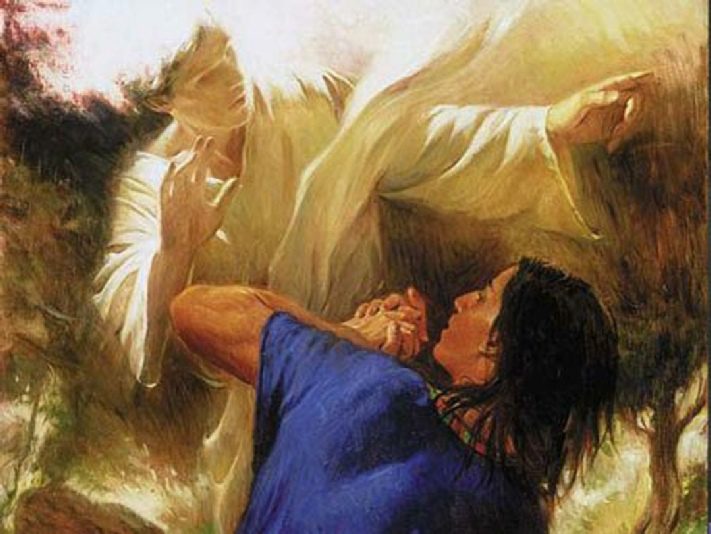 For Such a Time as This: How Angels Shape History

Cover image: “He Did Bring Glad Tidings to my Soul, by Walter Rane,” https://walterraneprints.com/.

Since the beginning of human history angels have been an integral part in keeping the spiritual ball rolling on this planet.[1]  If we may be wondering where God is and what He is doing at this point in time, just look at what he has ALREADY done, knowing He can do it again! He sends angels to shield from fiery furnace,[2] shut lions’ mouths,[3] miraculously rescue from prison[4] and SAVE nations. Let’s explore some of these remarkable intercessions and then look forward to what’s coming next…

Did You know, because of all the excruciating trials that Paul went through, God sent Abel (son of Adam) as an angel of comfort? Joseph Smith writes that Abel had “become an angel of God…and was sent down from heaven unto Paul to minister consoling words, and to commit unto him a knowledge of the mysteries of godliness.” [7]

Did You Know that King Benjamin’s’ address was not in his own words, but the entire sermon was brought to him by an angel, so that the people could be taught about Christ and filled with joy?[8]

God sends angels to move His divine agenda forward.  He dispatches them to save, inform and sustain His people “Israel.”  President Nelson has taught us that whoever lets God Prevail and is willing to let God be the most important influence in his life, is of Israel. [9] Many historical figures fit into this category.

Columbus was divinely led by the Holy Spirit and angels.  In a speech delivered on July 4, 1854, in the Salt Lake Tabernacle, Elder Orson Hyde, an apostle talked about an angel that helped Columbus.  He said,

“This… angel was with Columbus, and gave him deep impressions, by dreams and by visions, respecting this New World.  Trammeled by poverty and by an unpopular cause, yet his persevering and unyielding heart would not allow an obstacle in his way too great for him to overcome; and the angel of God helped him,-was with him on the stormy deep, calmed the troubled elements, and guided his frail vessel to the desired haven.”[10] Columbus was “of Israel.”

One of my favorite people in history was Joan of Arc.  She was a 13-year-old uneducated and illiterate peasant girl in the 1400’s who began seeing and hearing angels who told her that it was her destiny to save France, which was then occupied by England.

In a series of amazing events, with continual angelic help, she became General of the armies of France at age 17 and then led them into several important victories.

She was captured by the English when she was 18, and had to endure a dank prison alone in chains, all the while suffering through a brutal sham trial for nearly a year.  In the trial she was questioned and verbally assaulted by 62 judges and not allowed any witnesses of her own.  She was accused of heresy and being a Witch, but during the entire trial, she gave brilliant and inspiring answers to all of the questions given her.  Her angels often told her what to say to her captors.  Here is some of the informative dialogue as her captors asked her about her angels.

“Whose was the first Voice that came to you when you were thirteen years old?”

In another setting her accusers asked her,

“Did the Voice seek you often?”

“Yes, Twice or three times a week, saying, ‘Leave your village and go to France”…

“That I should raise the siege of Orleans.”

“No, I was to go to Vaucouleurs, and Robert de Baudricourt would give me soldiers to go with me to France; and I answered, saying that I was a poor girl who did not know how to ride, neither how to fight.” [12]

With the help of her angels this very young woman with NO military skills was raised up to eventually SAVE her nation.

In the end she was found guilty through trickery by the leaders of the church and burned at the stake, but until the very end, she held fast to her testimony of Christ, and the angels who ministered to her.  Joan of Arc strengthened the faith of Millions.

Joan was “of Israel.”

George Washington had angels help him as he led his soldiers in the Revolutionary war.  He allegedly had a profound and poignant vision where an angel continually told him to “Look and learn.” President Washington then sees three great trials come to America, after which he said,

“…The scene instantly began to fade and dissolve, and I at last saw nothing but the rising, curling vapor I at first beheld. This also disappearing, I found myself once more gazing upon the mysterious visitor, who, in the same voice I had heard before, said, ‘Son of the Republic, what you have seen is thus interpreted: Three great perils will come upon the Republic. The most fearful is the third, passing which the whole world united shall not prevail against her. Let every child of the Republic learn to live for his God, his land, and the Union.’ With these words the vision vanished, and I started from my seat, and felt that I had seen a vision wherein had been shown me the birth, progress, and destiny of the United States.”[13]

Elder Orson Hyde stood at the pulpit in the Tabernacle and boldly declared that George Washington had angelic help.  He specifically referred to the angel Moroni in the camp of Washington. He stated:

“It was by the agency of that same angel of God that appeared unto Joseph Smith, and revealed to him the history of the early inhabitants of this country, whose mounds, bones, and remains of towns, cities, and fortifications speak from the dust in the ears of the living with the voice of undeniable truth. This same angel presides over the destinies of America, and feels a lively interest in all our doings. He was in the camp of Washington; and, by an invisible hand, led on our fathers to conquest and victory; and all this to open and prepare the way for the Church and kingdom of God to be established on the western hemisphere, for the redemption of Israel and the salvation of the world . . . “[14]

President Washington was chosen to SAVE the republic with the aid of angels.  He was “of Israel.”

Joseph Smith was Tutored by Many angels.

In a virtual 2020 Mission Leadership Seminar on June 26, President Russell M. Nelson spoke about the Prophet Joseph’s many experiences with angels.  Did you know that after the first vision, Joseph saw the Father or the Son eight additional times? Four of these occasions were of the Father and the Son together and four times with Christ alone.[15]

Did you know that the angel Moroni came to Joseph Smith at least 20 times in the 1820s? President Nelson said that Joseph was “visited by 60 angels during his lifetime,” Some of these angels included John the Baptist, Peter, James, and John, and Moses, Elias, and Elijah.”[16]

These angels were all important in advancing the Kingdom of God with illuminating knowledge of restored doctrines, ordinances and sealing powers.  They came so the whole earth would not be utterly wasted at His coming.[17] They came with SAVING knowledge and authority.

Elder James E. Faust shared a story in a conference address about one of the Martin and Willie handcart companies, who were trapped by early snows as they crossed the plains.  Their very lives were SAVED or aided by angels.  Elder Faust relays one pioneer’s story:

“I have pulled my handcart when I was so weak and weary from illness and lack of food that I could hardly put one foot ahead of the other.  I have gone on [to some point I thought I could never reach, only to feel that] the cart began pushing me.  I have looked back many times to see who was pushing my cart, but my eyes saw no one.  I knew then that the angels of God were there.” [18]

Israel claimed it’s own that day.

Recently Rhonda Hair told me of a fascinating experience she had seeing angels intervene in a very important issue.  She was at a committee hearing at the Utah state capitol building during a legislative session.  The bill being voted on was a very controversial one that effected the moral education of Utah children.  For some wonderful reason, her mind was spiritually opened up to be able to see angels there.  She says,

“The heavenly armies were there in force; I could see them filling the whole front of the room up where the committee members sat, and extending far beyond the walls.  But there was another presence there too; it was dark, cold, and more than empty– it felt as if it was a vacuum. The area with that dark feeling began on the far right side of the chamber where a few of the committee members sat, and extended into the audience, where the proponents of the bill sat.”

Rhonda observed that the three legislators who were sitting in the ‘dark’ area voted in favor of this corrupt bill, while those in the light area voted against it. Happily, on that day the “Israel” prevailed![19]

Because God has sent so many angels to help throughout history, OF COURSE, He will continue to send many more to help His precious Israel. The good news is, WE ARE “Israel!” If we are truly willing to let God Prevail, we can expect angelic intervention in our lives!  He knows how to rescue, enlighten, and console us because He’s done it before.

So, remember and contemplate on what God has already done, and know that He will do equal or surpassingly great things in OUR futures.

[1] Alma 12:28-29 “And after God had appointed that these things should come unto man, behold, then he saw that it was expedient that man should know concerning the things whereof he had appointed unto them;

Therefore he sent angels to converse with them, who caused men to behold of his glory.” Italics added.

[6] Judges 13:3-5 3 “And the angel of the Lord appeared unto the woman, and said unto her, Behold now, thou art barren, and bearest not: but thou shalt conceive, and bear a son… and he shall begin to deliver Israel out of the hand of the Philistines.”

How very much this article was needed and appreciated....for such a time as this when there is so much evil around us. It surely lifted me up.

Thank you for continuing to encourage us with messages that are giving us more than hope; our faith is strengthened with history and current spiritual helps!