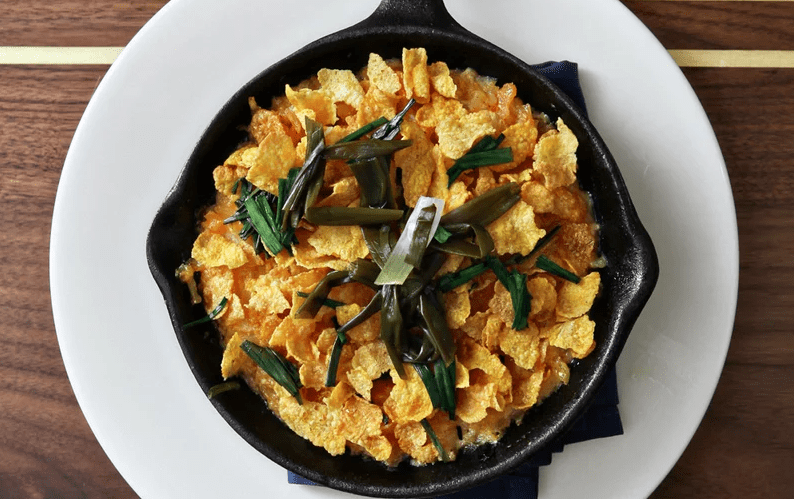 Anyone who has attended a potluck Mormon function will have tasted the ever present and popular “funeral potatoes”. In fact, if they’ve tasted them, they’ve probably also had seconds, possibly thirds. It is a dish that is difficult to keep around and delicious to any crowd and now it’s finally getting national recognition.

Food & Wine magazine recently highlighted and praised the dish, calling it “One of America’s Greatest Triumphs”. To read the full article, click here. The following is excerpted therefrom.

If you’ve ever encountered Mormon funeral potatoes, you can attest that the salty, crispy, cheesy casserole is one of the most oddly satisfying creations that exists in America—nay, the world. The likelihood you’ve eaten them, however, is slim, as funeral potatoes are mostly an Intermountain West thing. But we believe that the dish should be a staple at every family and holiday gathering.

I was introduced to the dish by my husband, who grew up in Salt Lake City eating it at large family gatherings—and he’d probably kill me for saying this, but he prepares it a few times a year when a carbs splurge is in order. My initial reaction was likely the same as yours: What…are funeral potatoes? Are they only served at funerals? Why such a morbid name? In a nutshell, funeral potatoes are a cheesy potato casserole made with frozen hash browns (sometimes fresh ones, if you’re fancy like that), cream of mushroom and cream of chicken soup, lots of cheese, lots of butter, lots of sour cream and then cornflakes sprinkled on top for a nice crunch.

“Try it before you diet,” Tyson Peterson, executive chef at Spoke & Steele in Indianapolis, says of the dish that’s most commonly served after LDS funerals or at family events. “Even if you’re not from that faith, in Utah they’re still called ‘Mormon Funeral Potatoes’ and have only positive connotation. They are perfect for any get-together, as they’re customizable and feed many people easily.”

To read the full article on Food & Wine, click here.

There's a growing movement afoot, easier and healthier......baked potatoes with dishes of toppings on the serving table. Hungry funeral goers may choose whether to be healthy or not!

Eating funeral potatoes is like saying, “I’m ok with having angioplasty and potentially having a heart attack from this greasy, fatty, comfort food that has almost ZERO nutritional value”. With all of the sour cream, butter and cheese, Funeral Potatoes are one of the most unhealthy dishes around, I thought we’ve become a healthier people? Our family jokes that the dish is called Funeral Potatoes because if you eat them, your funeral is next.