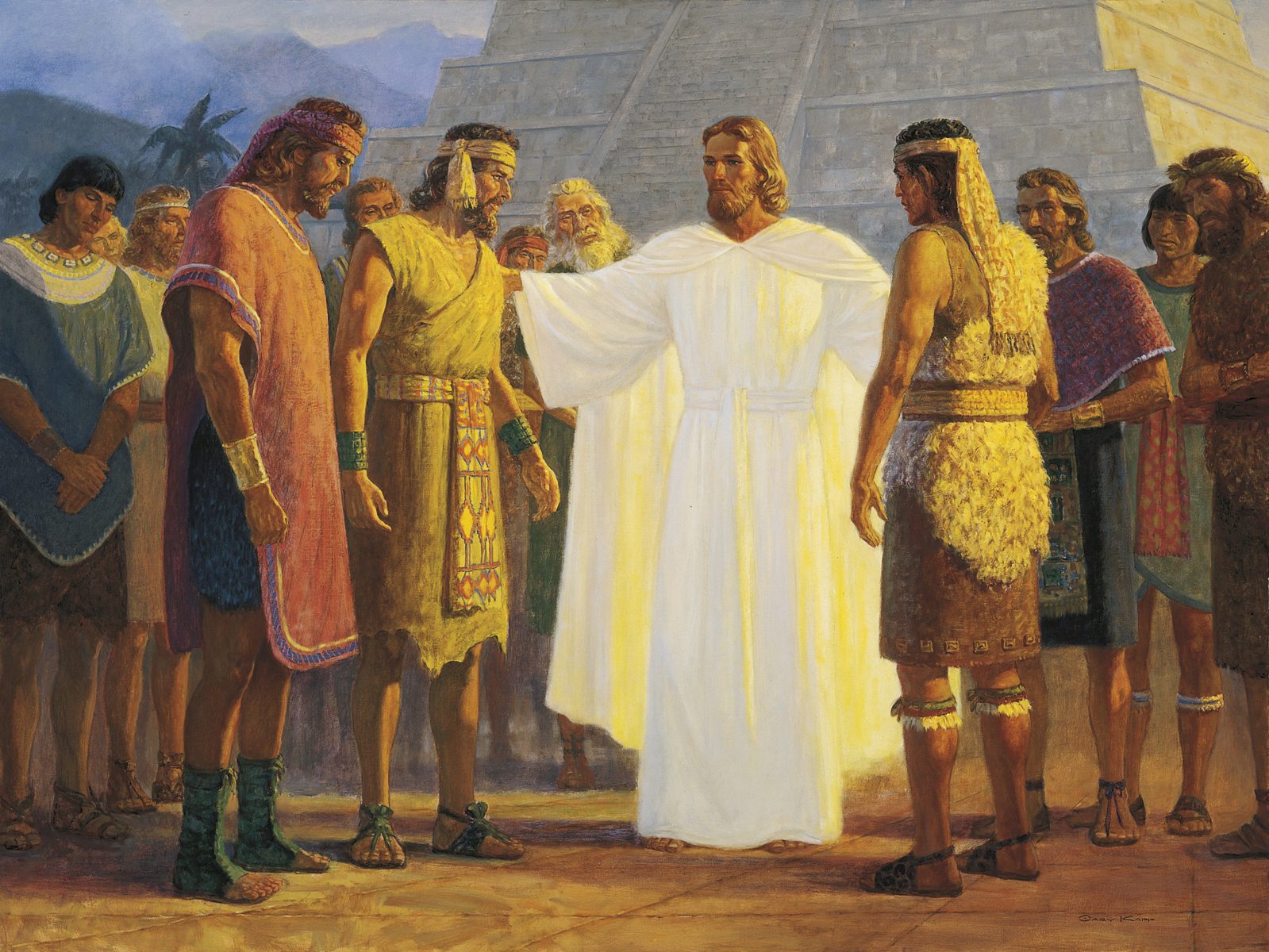 Mormon must have felt there was some importance in including these two timing clues for Christ’s ministering visit to the Nephites.  Since Christ was crucified as the Passover lamb at the ending of the 33rd year/beginning of the 34th, the ending of the 34th year would be a year later. It is difficult to reconcile how a year later would be “soon after His ascension.”  But what if there are some important messages in this dating that Mormon wanted to communicate?  Why would he include two clues that require so much struggle to reconcile?

We know that festival timing in the law of Moses was vital in the typology of creation’s greatest events. For example, at roughly 3:00pm as Christ uttered His last words on the cross, “It is finished,” then gave up the Ghost, the Pascal lamb died at the temple altar under the knife of the High Priest.  Christ rose on the third day as the first fruits of the resurrection.  On that same day, the priests offered the barley sheaves as the offering of “first fruits” of the spring harvest. The details are astounding as Christ fulfilled the law of Moses.  A law which seems more like re-enacted prophesies. Alfred Edersheim, a Jewish convert to Christianity, noted that the festivals of spring were types of the meridian of times, while those of the fall were symbolic of the end times, yet to be fulfilled.

Adding all this to President Benson’s understanding of the Book of Mormon as a type of things to come, it is interesting to note, those fall festivals begin on the autumnal equinox with the Feast of the Trumpets, followed days later by the Day of Atonement and the Feast of the Tabernacles. It is no coincidence that after three years of waiting, following the dispensation-opening vision in the sacred grove, that Moroni would come on the fall equinox to the young Joseph Smith and reveal to him the trumpet of this last dispensation – The Book of Mormon. Nor is it simply coincidence that the Feast of the Tabernacles is considered the feast of the harvest, portending a great latter-day gathering which according to Edersheim “has yet to be fulfilled.”

Central to the Feast of the Tabernacles/Feast of lights/Feast of the harvest was the unique sacrificial process. The festival lasted seven days.  On the first day, thirteen bullocks were offered, the second day twelve were offered, etc. until on the last day, seven were offered. 13+12+11+10+9+8+7=70. There were other animals included as well but it is noteworthy that it was at this time of year that the Savior called “The 70” to go forth as under-shepherds, representing Him, to preach and administrate under the apostles.  It is also the number of nations listed after the flood. So this number portends a great preaching and gathering from all the nations of the world!

But what has this to do with Mormon’s timing keys?  Learning about the feast of the trumpets may shed some light on the subject.  Here are some commentaries from two on-line Bible dictionaries on its timing:

“The year (shanah) originally began in the autumn, as appears from Exodus 23:16 and Exodus 34:22, where it is stated that the feast of Ingathering should be at the end of the year…This seems to have been a reckoning for civil purposes, while the year beginning with Nican (Nisan) was for ritual and sacred purposes. This resulted from the fact that the great feast of the Passover occurred in this month and the other feasts were regulated by this…”

“Moses appointed that Nican (Nisan), should be the first month of their festivals, because he brought them out of Egypt in that month; so that this month began the year as to all solemnities they observed to the honor of God, although he preserved the original order of the months as to selling and buying and other ordinary affairs.”

“Since Tishri 1 (September) became the New Year’s Day (Rosh Hashanah) in post-biblical Judaism, many believe that the Feast of Trumpets was the ancient Israelite New Year’s Day as well.

For the purposes of the calendar of festivals, however, the Feast of Trumpets was not a New Year’s festival. The two critical texts ( Lev 23:23-25 ;  Num 29:1-6 ) never imply that it had anything to do with the new year.

Even if not a New Year’s Day, the Feast of Trumpets heralded the close of the festival year, a time of reckoning with God.”

So, what if Christ’s appearance to the Nephites was at this autumn time, the ending of the 34th civil/festival year.  If His ascension was a reference to His resurrection or to His final ascension 50 days later – April or May, then His appearance to the Nephites would have come in September/October, four to six months later.  That is easier to reconcile with the meaning of the word “soon.”  But this is still speculation, trying to understand Mormon.  The more we know about the details of the feast, then the more significant this becomes as a type of Christ’s second coming!

The feast of the trumpets marked the beginning of the seventh month which like the creation’s seventh or sabbath day had special purpose in God’s relationship to man.  Like creation, the work of an agrarian society came to a completion on this seventh time.  Also like the creation, this time became holy with two most important festivals as mentioned above.  In addition, the trumpets sounding all day not only recalled Sinai’s thunder at the reception of the law, but signaled the sequel day of Atonement where Israel’s national sins were cleansed by the High Priest’s annual entrance into the Holy of Holies as well as a signal to all scatter Israel to come home.  All Israel met at the temple to humble themselves before God, repent, and symbolically have Satan and sin thrust from their presence through the sacrificial symbolism of the festival.  It can’t be coincidence that this very sequence and purpose served as the agenda for Christ’s appearance to the Nephites: the re-creation of their world, gathering of the faithful at the temple, the appearance of the Great High Priest, and the confounding of Satan’s doctrine of contention.

The sequence of events leading up to this Nephite epiphany is even more evidence of the Book of Mormon’s historical typology and fulfillment of Moroni’s insight to the content selection of the Book.

“Behold, I speak unto you as if ye were present, and yet ye are not. But behold, Jesus Christ hath shown you unto me, and I know your doing.” Mormon 8:35

From the room full of source records undoubtedly available to Mormon and Moroni, careful selection was made of those that now unfold to us in the abridged and apparently typological record.

The final conclusion of when Christ visited and taught the Nephites has the same certainty as Christ’s second coming to the world.  We know it is sure but don’t know the exact timing without ongoing prophetic declaration as with Samuel the Lamanite in the Meridian of times.

1 3 Nephi 10:18 18 And it came to pass that in the ending of the thirty and fourth year , behold, I will show unto you that the people of Nephi who were spared, and also those who had been called Lamanites, who had been spared, did have great favors shown unto them, and great blessings poured out upon their heads, insomuch that soon after the ascension of Christ into heaven he did truly manifest himself unto them—

2 Some have argued that to Mormon, His ascension must have meant simply His resurrection three days after His death. Since we have the New Testament account of what is called “the ascension” around fifty days after His death-just before Pentecost, it is easy to wonder what Mormon had in mind. Either way the “ending of the 34 th year – a full year after His death and resurrection – doesn’t seem soon, even though most authors just concede that it must be. Others, even here at Meridian have proposed astronomical calendars and dating ideas but it still results in settling with the idea that a full year passed between these important events. Perhaps it is just not that important!

4 ” The record of the Nephite history just prior to the Savior’s visit reveals many parallels to our own day as we anticipate the Savior’s second coming” Ezra Taft Benson “The Savior’s Visit to America,” Ens, 4/87

5 Isaiah 5:26 And he will lift up an ensign to the nations from far, and will hiss unto them from the end of the earth: and, behold, they shall come with speed swiftly. Hiss=Hebrew “Sharaq” meaning to call or signal

10 Helaman 14:2 Behold, I give unto you a sign; for five years more cometh, and behold, then cometh the Son of God to redeem all those who shall believe on his name.

Joseph Smith took possession of the gold plates on 22 September 1827; which in that year was Rosh Hashanah aka Feast of the Trumpets; which by Jewish tradition commemorated the bringing forth of the 10 Commandments by Moses and the start of the world (when Adam and Eve left the Garden of Eden). After 5 visits by Joseph to the Hill Cumorah on that same day, it was not until in the 4th year on his final visit that 22 September 1827 fell on 1 Tishrei 5588. There is no doubt in my mind, God is running things!