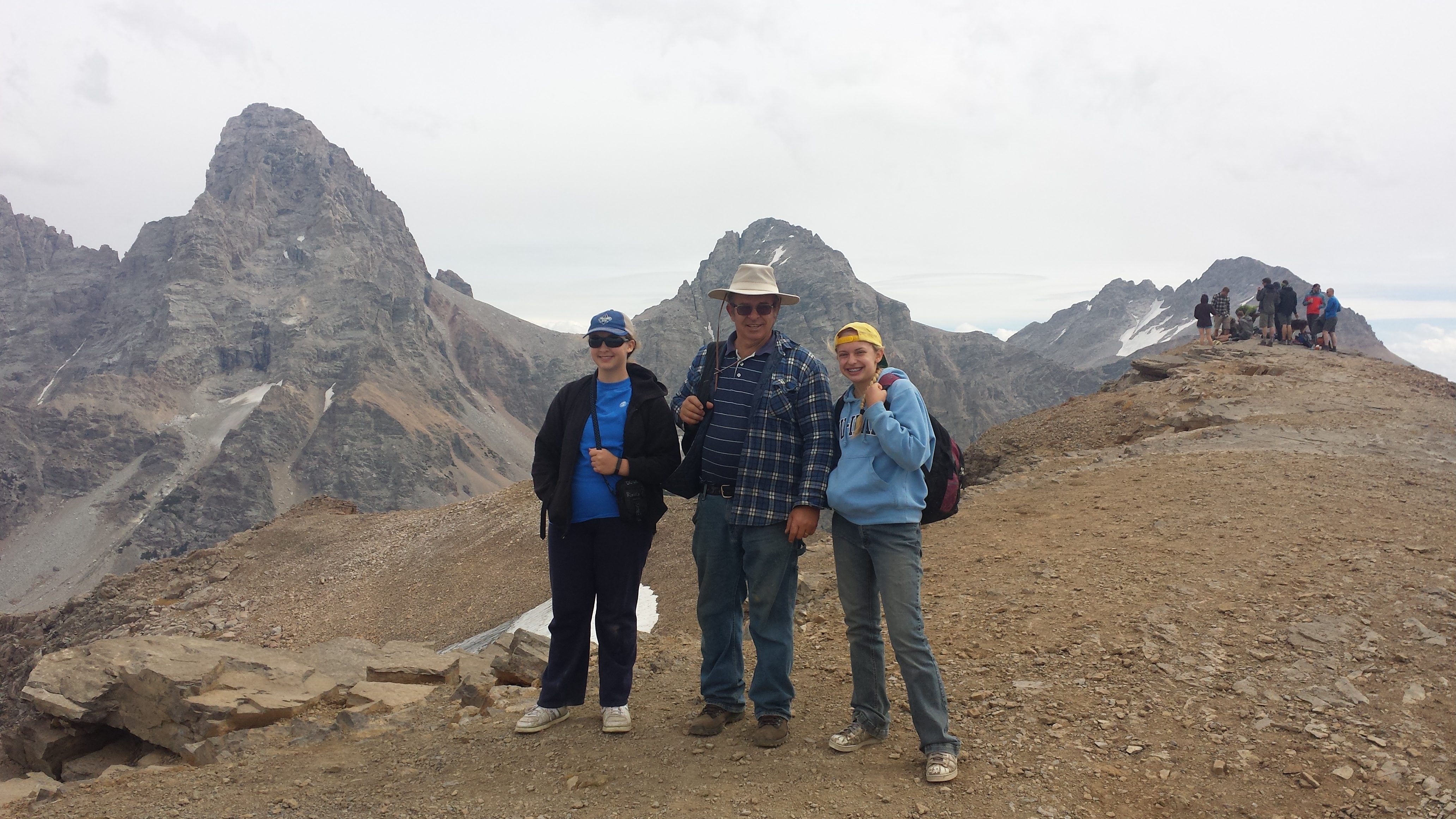 I finished a goal that I wrote about in one of my stories ten years ago. The goal was that I would take each of my ten children on the hike to Table Mountain, which is just below the Tetons. I thought about the first time I took some of them up there, and I was already feeling past my prime then. But this time was even worse. And when I walked into church this last Sunday, someone asked me why I was limping. When I explained it was from blisters and told him why, he looked at me and said, “Hike that at your age! You’re crazy!”

Maybe it was crazy. The hike is a grueling fourteen mile round trip, climbing thousands of feet, some of it across granite and slippery shale rock. But the summit has a beautiful view. And I usually only have to make the hike once with each child, then they usually decide they will never do it again.

My youngest daughter turned thirteen recently, so I decided she was strong enough to make the climb. I had also never taken her sister, who is only two years older, so the three of us decided to make a day of it on the Saturday before Labor Day. I checked all of my equipment the night before and found that my water purification pump had quit working since I last used it. That left no option but to carry extra water.

We got up at five o’clock and drove to the trailhead, arriving just before seven. We stretched, used the restroom, and headed on our way. The first part of the climb was quite strenuous with switchbacks out of the parking lot up into the canyon. This soon turned into an easier upward trail. But that just lulled a person into a false security, because once a person reached the point where they felt too close to the summit to turn back, the trail turned steeply upward.

The sun wasn’t yet showing above the mountain rim when we reached our first mile point, and no one had passed us, so I felt we were doing really well. But as time went on, people did start to pass us. First just a few, then whole families. The extra water in my pack felt like it weighed a ton, and my muscles were shouting “Stupid!” at me with every step I took.

When we reached the point where the trail turned into steep switchbacks up the top of the canyon rim, I told my daughters it was time to cache more than half of the water and only carry what we would need to get us back to that point. My daughters readily agreed. We put the full water bottles into some brush and continued our climb. The higher we climbed, the more one daughter struggled with the lack of oxygen. We started setting a goal of a hundred steps, then rest. A hundred steps, then rest. That later turned to seventy-five, then fifty, as the trail turned ever steeper.

More and more people passed us, but when a man who looked to be about eighty walked by, I began to question if I was delusional, especially since he was smiling. I have to admit that I was probably still the second oldest person on the mountain that day, but I doubted I would be making that hike twenty-five years from now. And I definitely would not be smiling if I did.

We made it to the top, had lunch, took pictures, and then turned to go back down. As I stood and my muscles screamed, I looked down and knew there was no other option. I warned my daughters that the hike down seemed to go forever, and indeed, I kept hearing, “Aren’t we almost there yet?” more than I can count. But eventually we made it.

For a reward, we stopped at a little drug store for ice-cream. As we sat and ate, I said, “Well, my job is done. Now it will be up to you to take your children up there.”

My older daughter, wincing from the blisters on her feet, groaned. “When I get married, I think I will move to a flat prairie and tell my children that mountains only exist in story books.”

I smiled and considered that maybe I should have thought of that years ago.

As I was reading this, the tune from "The Sound of Music" came unbidden to mind: "Climb Every Mountain!" Should be the theme music behind any strenuous endeavor. Once you have lived in the mountains, however, like Maria, you will always want to be there. The plains will only make you feel dull and lacking. Sore muscles and blisters are small payment for the inspiration and feeling of attainment.

You daughter is so smart and funny! What a great family tradition and I will be content to just vicariously do the same with my children....without the blisters! In fact, I'm taking them out tonight to celebrate with some ice cream. Thanks for sharing your awesome story.