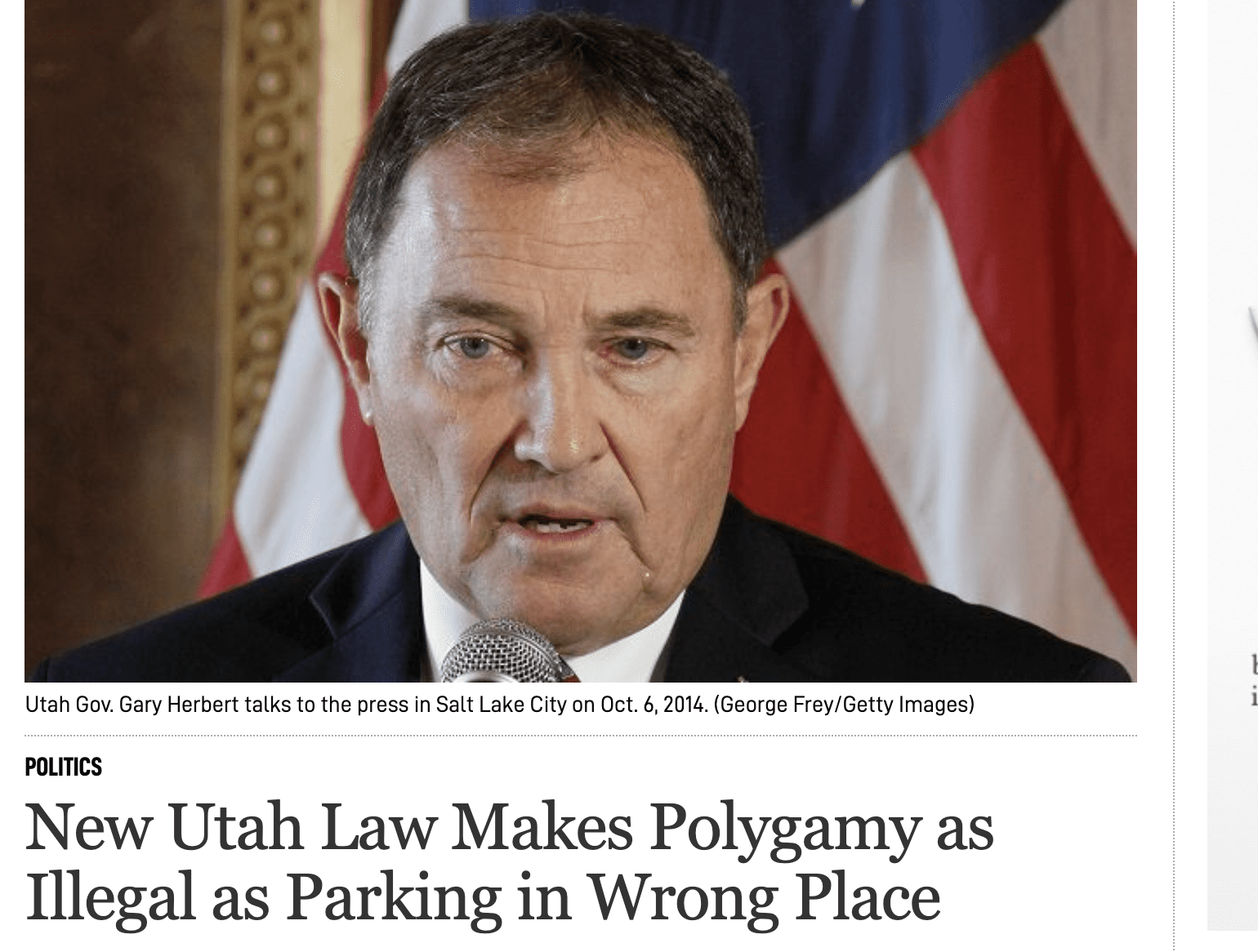 Despite its advertising claims that it’s a new brand of journalism, free from bias, The Epoch Times published a major unfair and one-sided assault on Utah’s new attempt to decriminalize polygamy, leaving major holes in its reporting.

“New Utah Law Makes Polygamy as Illegal as Parking in Wrong Place,” by Epoch Times congressional correspondent and noted investigative reporter Mark Tapscott, misses essential issues and a pressing need for a legal change except to raise some long-winded hypothetical religious freedom argument. It never mentions the immediate human needs and #metoo crisis, particularly for women and girls, in polygamist communities. It’s funny Tapscott quotes religious liberty observers from across the U.S., but doesn’t bother to quote the bill’s sponsor or supporters, who could have shed some light on this situation.

In a feeble attempt at journalistic balance, Tapscott said Utah’s two Republican Sens. Mike Lee and Mitt Romney didn’t respond to request for information, like they had anything to do with this legislation. Their only tie, like many of us Latter-day Saints, was to note that the senators’ ancestors were polygamists. This legislation originated in Utah’s state house. Why not call the Utah Legislature in Salt Lake City instead of D.C. Capitol Hill offices?

Furthermore, the article leaves the impression that Utahns are still a bunch of 19th Century polygamist scofflaws. For a news organization that seems to favor religious liberty and has loose ties to members of the religious group Fulan Gong, its readers deserve better. There are religiously and morality-based arguments for and against this law. Too bad, readers only got one side.

There is good reason for a change in the law. There are many so-called fundamentalist families and segments of Utah society who have been stranded in a legal no-man’s land since statehood or at least since bigamy became a felony in the 1930s. There is strong evidence that leaders of these polygamist groups have used legal cover to perpetuate welfare fraud, abuse of underage girls, forced marriages, manipulation of property ownership and the list goes on. Also, the sponsor sees the bill as a way for secretive polygamists to emerge from the shadows and be integrated into society and also correct a law that hasn’t been enforced for generations.

As sponsor Sen. Diedre Henderson, R-Spanish Fork, said during the legislative session, “The wall Utah has built to keep people out of polygamy is the very wall that’s trapping them inside.”

Changing the law allows Utah law enforcement authorities to much better deal with these thorny issues. The day when the state might have stamped out polygamy, even when Latter-day Saints abandoned the practice in 1890, has never come. Let’s grasp reality. This is a practical measure to help real people with real lives. It allows the government to help meet their needs as well as enforce laws related to leaders who might abuse them.

My journalism students at Brigham Young University covered debates about this bill during the legislative session. I recommend this reporting, which includes very frank testimony about problems in polygamist communities, to get a better idea about the real reasons for the bills and why they were passed with such overwhelming support. Here’s an example.

It’s also interesting that the bill’s sponsor Henderson, also on the ticket with the current Lt. Gov Spencer Cox running for governor, was apparently never contacted for the article. She is a bright and articulate leader whose voice deserved to be heard in this article, instead she got ridicule for her work to research important issues and this attempt to address them with law.

The article also makes Gov. Gary Herbert to be a bad guy because he didn’t veto the bill, even though the bill had veto-proof margins. The vote on the bill and law that was unanimous in the Utah Senate and received only three votes against it in the Utah House. For political and moral reasons, Herbert doesn’t deserve this backhanded disdain.

Finally, The Church of Jesus Christ Latter-day Saints (we don’t want to be called Mormons or the Mormon church anymore) hasn’t authorized polygamous marriages since 1890. That fact is central to the story and its absence could easily leave the impression that rank-and-file Latter-day Saints still practice something that ended four generations ago.

The Epoch Times should pull down Tapscott’s story and try again at better reporting to reflect its “truth and tradition” advertising slogan.

Joel Campbell is an associate professor of journalism at BYU. He researches. writes and teaches about media and religion. He does not speak for BYU or any other organization. This column reflects only his opinion and should not be construed as a news report.