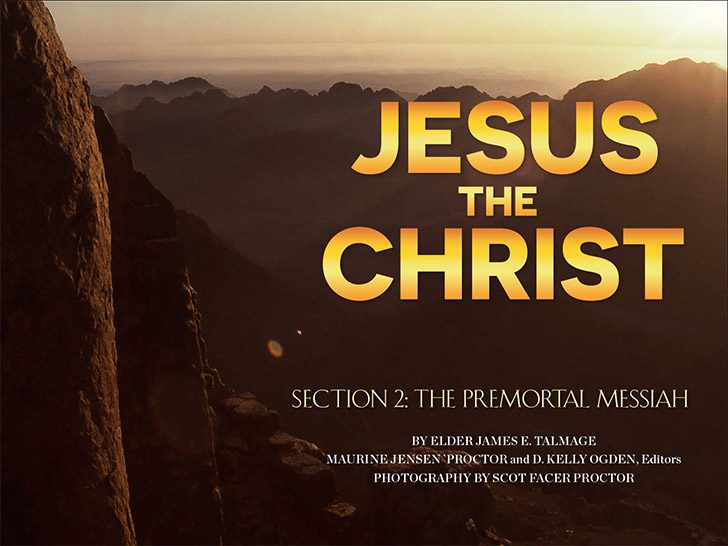 Sneak Preview of the New, Amazing, Electronic Edition of Talmage’s Jesus the Christ

This month we celebrate the 100th anniversary of the landmark publication of Elder James E. Talmage’s Jesus the Christ. Most of us have been greatly influenced by this wonderful book. Many tie their testimonies of the Savior to their first reading of this book. Others have made a life-long study of Talmage’s work. It is required reading for missionaries. No book in our culture, save the scriptures, has been sold or distributed wider. It truly is a foundational work. What better way to celebrate this most amazing and sacred publication than to announce the ‘production’ of the Second Century Edition! Let me explain why I purposely used the word ‘production’ rather than publication.

A few years ago we were sitting in our office and we received a call from our dear friend, BYU Professor D. Kelly Ogden. He wanted to float an idea past us. He said, “You know, in a few years it will be the 100th anniversary of the publication of Jesus the Christ, have you ever thought about putting together a new edition? If so, would you like to work together on it?” Well, yes, we had been thinking about it since we had completed new editions of Lucy Mack Smith’s history in 1996 and Parley P. Pratt’s in 2000. We were very excited about the idea and we were also very excited to work with Kelly.

Kelly Ogden’s life seemed to be destined to center in the Middle East and specifically in Israel. His master’s degree was in the Hebrew language and his PhD was in Middle East studies. He and his family lived in the Holy Land for a dozen years. He was the first associate director of the BYU Jerusalem Center for Near Eastern Studies and he served twice as the branch president of the Jerusalem Branch. Kelly has literally walked the length and width of the country of Israel, coming to know the trails, the roads and hills, valleys and plains of this place where Jesus walked. Being with Kelly in Israel is like being with a walking, talking encyclopedia. Yes, we wanted to work with Kelly on this project!

I spent part of my growing up years living in Ankara, Turkey and then traveling extensively throughout the Middle East. In my American school in Ankara, traveling was encouraged and counted as an excused absence. We took advantage of that. My first trip to the Holy Land was just two months before the Six Day War in 1967. Maurine and I have been traveling regularly to the Holy Land since the late 80’s. We go there every year and sometimes many times a year. It is like a second home to us. We have dear friends in every quarter. Walking through the Old City of Jerusalem is like a homecoming.

So, the team was set. Now we had to figure out the format of the 2nd Century edition. We were not going to change Elder Talmage’s text at all, but we did want to greatly enhance the readability of the work and add as much interest as possible.

Having published 33,000 original articles on Meridian in the past 16 ½ years, we have come to know a few keys things about how to get someone to read something. You have to have lots of entry points. You have to keep their interest going. You have to have visual aids. You have to hold their hand and keep walking with them through the entire experience. All these things became important to us as we started.

The photographer in me said, “We need to add hundreds of photographs, all newly shot for this edition.” We all wanted to add as much art as possible, preferably from as many Latter-day Saint artists as we could find, and, of course, from the masters as well. We knew that Elder Talmage did not use the Joseph Smith Translation so we had to add in the pertinent footnotes. Kelly insisted on giving the reader easy access to definitions of more difficult words in the text. Maurine wanted to change the division of the paragraphs so they were easier to follow and much shorter—and to add sub-titles that would walk the reader through the text. The project unfolded like a poppy opening to the morning sun. We became more and more excited with each new idea and approach.

We started with our wish list and then we had to figure out how to make each component become a reality. Technology has come so far in 100 years, it’s clear that a 2nd Century Edition would have to incorporate the best and latest this world has to offer.

It became clear that there was no way we could do a print edition. This had to be an electronic version, one that was extremely accessible to anyone with a computer or a smart device. But one question haunted me: Why do we not see electronic editions of any of the gorgeous National Geographic, photo-rich books? We went to a publisher that we had worked with many times to see if they would work with us and make this a reality. They declined based on their assessment that their “platform would not support what [we were] wanting to do.” We accepted that. In further conversations they told us they really did not know how to do what we were proposing. That became the challenge for us: How to do what we envisioned.

We first did a number of focus groups to determine the viability of this approach and the interest in such a project. We were fascinated with the results. We determined our initial audience was going to be Young Single Adults—the very people we wanted to encourage to read Jesus the Christ. We found, amazingly, that more than 95% of the YSA’s we talked to had never read the book! We asked why. The overwhelming answer was that it was too hard, too unapproachable and too ‘heavy.’ Elder Talmage’s original work is 804 pages long in 42 chapters. Daunting, it seems, for the instant gratification generation. We also asked married adults the same questions. We received almost exactly the same answers, with a small percentage who had ever read the entire book. We asked how many had attempted to read Talmage’s work: 100%! When we showed them our approach in electronic format for all devices (desktops, smart tablets, smart phones, iOS and Android devices) we had literally 100% response in wanting to read it. This got us very excited.

All we had to do was figure out how to put huge amounts of information, data, graphics and media into a format that didn’t take up more space than the device would handle! After years of research, and with technology changing and improving in those very years, we’ve finally been able to see the path and the way to make this become a reality. We’ve worked with companies in Florida and New York, in California and Ireland, in Washington and many other places. Now, working with Adobe Corporate, and using cloud technology partners, we are able to make this become a reality.

There is much more to say and in the coming weeks we will begin telling you more and more about the project. In a series of 12 articles, Dr. Ogden will help you come to know Elder James E. Talmage as never before. We will be giving you regular updates on the project itself. We will take you on the inside track with more than a dozen videos documenting “the making of the 2nd Century Edition of Jesus the Christ.” You will find this very exciting. Let’s talk about some things to get excited about.

Eleven Things You Need to Know about the 2nd Century Edition

Sunrise shoot with a fisherman on the Sea of Galilee.

I shot more than 600 images in about an hour.

Light streams around the Garden Tomb.

Shooting with low depth of field in the Garden of Gethsemane gives an intimate feel.

We came to feel very close to Simon the shepherd. He has an amazing face.

Mary was played by a young Nazarene named Miriam. She is 14 years old, much more like Mary must have been.

The man who played the part of Jesus is named Majd and is 28 years old. He taught us much about Jesus.

This has been a very expensive production and we are still expending at a high rate to get this finished. Many have asked if they could support this project. The answer is a grateful yes. As you all know we are a small operation, but we forge ahead and watch things happen. We would welcome your contributions. Anyone contributing $500 or more will have their name in an acknowledgements page in the book in perpetuity [[Definition: On an ongoing basis, forever, as long as this technology will be]]. Thank you in advance. Please send checks (only) to:

I will write more articles in the near future about all this. We have numerous stories to share about doing this project. I will include a “frequently-asked questions” piece and answer questions such as: When will it be available? How much do you think it will cost? Will there be a hardbound edition? Are there plans for other enhanced electronic books in the future?

This is a sacred experience and we feel humbled and blessed to be a part of it.

I recently made a trip to the Holy Land. When I saw the picture of Simon the Shepherd I laughed out loud. I met him and a couple of his sheep while visiting Nazareth. I'm anxious to see more of your pictures and relive a truly remarkable experience.

Maybe you should try a crowdfunding campaign for those who are wanting a hard copy of the "book" instead of digital edition. That way you can get commitments from those who are interested and have the money up front for the costs associated with creating the work of art.