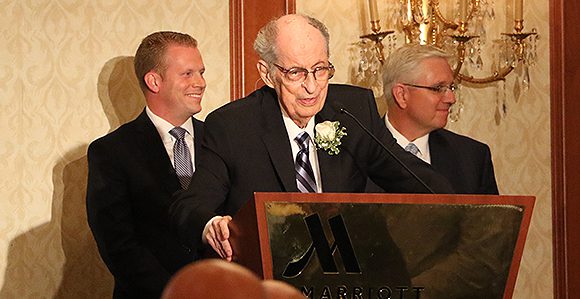 After being honored with the 2017 Pioneers of Progress President’s Award, Elder Robert D. Hales walked—with determined effort—to the pulpit and said the greatest challenge in life is “enduring to the end.”

“I think that enduring to the end is the greatest accomplishment, to be able to give everything you have got,” said Elder Hales of the Quorum of the Twelve Apostles in a video featured during the program. “It is like the coaches say, ‘When you give everything on the playing field, you can’t ask for more.’”

The Pioneers of Progress Awards—sponsored by the Days of ’47, Inc.—were instituted in 1995 to recognize service and achievement in modern-day pioneering. Six Utahns were honored during this year’s event, held in the downtown Salt Lake City Marriott Hotel.

KUTV reporter Daniel Woodruff introduced Elder Hales, noting the President’s Award is not given every year and goes to someone who is “eminently deserving.” (Elder M. Russell Ballard of the Quorum of the Twelve Apostles and Most Reverend John C. Wester received the award in 2011.)

Woodruff said he asked an event organizer why Elder Hales was selected. In response the organizer lauded Elder Hales as friendly, warm, approachable, accepting, a pure gentleman, and finally, “someone with a tremendously positive attitude who has had to face tremendous challenges.”