Elder Ballard to World Congress of Families: We Have Plenty of Support for Traditional Marriage | Meridian Magazine 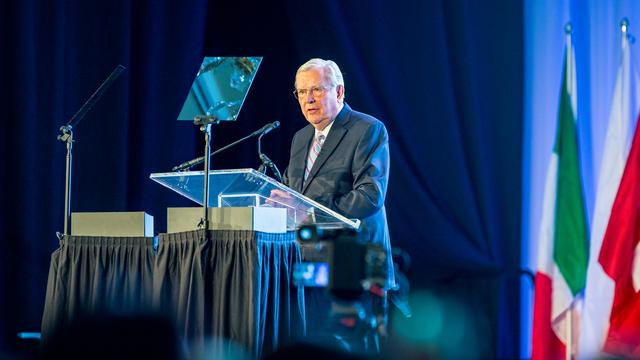 Elder Ballard to World Congress of Families: We Have Plenty of Support for Traditional Marriage

Elder M. Russell Ballard told the 3,000 participants of the ninth World Congress of Families being held in Salt Lake City that we have plenty of support for traditional marriage.

This is an excerpt from his talk:

Society, law, and popular opinion may change, but we know that society’s version of the family cannot and will not substitute for God’s purpose and plan for His children.

In today’s world, where marriage and children are increasingly marginalized, The Church of Jesus Christ of Latter-day Saints does not stand alone in identifying the traditional family as one of its most important doctrinal elements.

“He made men and women for happiness, to share their journey with someone who complements them, to live the wondrous experience of love: to love and to be loved, and to see their love bear fruit in children ….”[i]

Marriage is the uniting of one man and one woman in covenant commitment for a lifetime. … The husband and wife are of equal worth before God, since both are created in God’s image.[ii]

Our doctrinal beliefs about the eternal family and statements by other prominent Christian leaders all make it easier to understand why we are so dedicated to nurturing, protecting, and promoting traditional families.

There are those who think that such doctrine and statements are irrational religious voices. However, the U.S. Supreme Court went out of its way to acknowledge that sincere and reasonable people could hold a different opinion, even when recognizing same-sex marriage in June 2015. I quote:

Marriage is sacred to those who live by their religions.… There are untold references to the beauty of marriage in religious and philosophical texts spanning time, cultures, and faiths, as well as in art and literature in all their forms. It is fair and necessary to say these references were based on the understanding that marriage is a union between two persons of the opposite sex.…

Marriage, in their view, is by its nature a gender-differentiated union of man and woman. This view long has been held—and continues to be held—in good faith by reasonable and sincere people here and throughout the world.[iii]

The Supreme Court correctly recognized that many sincere and reasonable people in the world continue to recognize traditional marriage.

Understanding that reasonable and sincere people may view marriage as only between people of the opposite gender, the public square must accommodate and religious freedom must protect such views. Indeed, since religious beliefs can affect how believers view the very purpose of life, such views will inform how they interact with society.

I am reminded of the story of young children whose school read stories about two princes falling in love. The school presented this material with no warning or notification. When parents asked to be notified if this story were read again in the future, the school refused.[iv]

Would it really have harmed school administrators to let parents withdraw their children when the material being taught is contrary to their beliefs? The school’s decision seems like a direct assault on the role of parents in raising their children.

We seem to live in a time of extremes. Often compromise seems difficult and distant. We hear stories of people who have tried to be true to their standards, only to be accused of bigotry or intolerance or punished on a seemingly unreasonable scale.

Most of the 168 nations, including the United States, acknowledged parents’ prerogative in teaching their children when they signed the International Covenant on Civil and Political Rights, . Article 18 of this treaty states:

The … Parties … undertake to have respect for the liberty of parents … to ensure the religious and moral education of their children in conformity with their own convictions.[v]

This international human rights protection is consistent with my own Church’s position, which states in The Family Proclamation:

Parents have a sacred duty to rear their children in love and righteousness … and to teach them to love and serve one another, [and] observe the commandments of God …—mothers and fathers—will be held accountable before God for the discharge of these obligations.

Although it may feel like the tide is against us, we have plenty of support to continue holding our views of traditional marriage. I have identified only a few sources. Many more exist.

We must rally all the support we can to strengthen and protect our faiths, families, and freedom. Some are actively trying to strip us of these rights. One news story reported that millions of dollars have been poured into defeating religious freedom protections in the United States.[vi] To these kinds of threats, I believe my colleague, Elder Dallin H. Oaks has put it best:

Even as we seek to be meek and to avoid contention, we must not compromise or dilute our commitment to the truths we understand. We must not surrender our positions or our values.[vii]

If those who oppose us are genuine in their commitment to the values of diversity and equality, we should be able to work together to find compassion and peace. Forcing the beliefs of one onto another, as was done with the children being read material contrary to their parents’ wishes, diminishes diversity and skews the scales of equality. By engaging in compromise and extending love to all God’s children, who are our brothers and sisters, we can create a peaceful, diverse tapestry of ideals and beliefs.

Guiding Principles on Loving One Another

Now that I have described the importance of traditional marriage and that we must defend our rights, let me explain why we should extend a hand of fellowship to those with whom we disagree. Christ commanded:

44 … Love your enemies, bless them that curse you, do good to them that hate you, and pray for them which despitefully use you, and persecute you;

Just as we do not or should not shun family members with whom we disagree, we cannot and should not shun those who look or think or act differently than we do. We demonstrate our best humanity when we show love and kindness to all of God’s children. We demonstrate our discipleship when we refuse strident tones, when we refuse derisive labels, and when we enter the public square seeking fair outcomes through understanding and mutual respect.

My Church recently supported legislation that balanced the concerns of the LGBT movement and religious sensitivities. The legislation protects LGBT people from being fired or denied housing because of their sexual orientation. At the same time, religious conscience and the right to protect deeply held religious beliefs is protected by this robust legislation.

Although none of the parties achieved all they wanted, our work with the LGBT community and the Utah legislature lessened the divisiveness in our communities without compromising on key principles.[ix] We can love one another without compromising personal divine ideals. And we can speak of those ideals without marginalizing others.

Jesus Christ was an ultimate example of loving others. Just hours before He began the painful process of paying for the sins of each of us, Christ met with His Apostles to partake of the Feast of the Passover—His Last Supper—and to give them the final instructions He would offer in mortality. Among these teachings is the stirring, life-changing declaration, “A new commandment I give unto you, That ye love one another; as I have loved you, that ye also love one another” (John 13:34).

We can be specific and passionate about the benefits of man-woman marriage without disrespecting or injuring those who think otherwise. Regardless of belief or practice, as brothers and sisters we should strive to understand one another. Remember, married or single, that, in the end, we are each a unique part of God’s grand plan.

At the beginning of this talk, I showed you a picture of the Salt Lake Temple and spoke about how fundamental families are to our Church’s beliefs. In conclusion, let me share the image of another temple that stands 1,200 miles away in Nauvoo, Illinois.

The Latter-day Saints’ prophet, Joseph Smith, and his brother Hyrum were murdered on June 27, 1844 by a mob while they were held in state custody. After their martyrdom, persecution and mobs threatened to destroy the members of the Church while they were building this temple. Yet, they dedicated it on May 1, 1846 and pressed on even while knowing they might have to later abandon it. Before being driven out by the mobs, they attended the temple day and night to make sacred promises that would unite them eternally as families.[x]

In making the trek to this Salt Lake Valley, great-grandparents on both my mother and my father’s sides paid a monumental price in suffering and privation. Pioneer families were separated by death and despite burying children, spouses, parents, grandparents, and friends along their barren trek west, they pressed forward.

Their faith in a divine plan designed by Heavenly Parents who love us gave them courage in the face of tremendous challenges. They sought a place where without persecution they could raise their families to love God and to serve Him. I thank them for leading the way.

The doctrine and theology of The Church of Jesus Christ of Latter-day Saints literally start and end with family. I repeat what I said earlier: we believe that we lived prior to this earth life, as members of the spiritual, pre-mortal family of God; and that as children of Heavenly Parents we are to prepare while on earth to return to receive the blessings promised to those who have kept God’s commandments.

This knowledge today will prepare each one of us for that day when we all shall die and then surely know the true purpose of God’s plan for us upon our return once again to His Holy presence. As noted in the Family Proclamation:

We call upon responsible citizens and officers of government everywhere to promote these measures designed to maintain and strengthen the family as the fundamental unit of society.