Digging for the Past: The Secrets in Our Own Backyard | Meridian Magazine 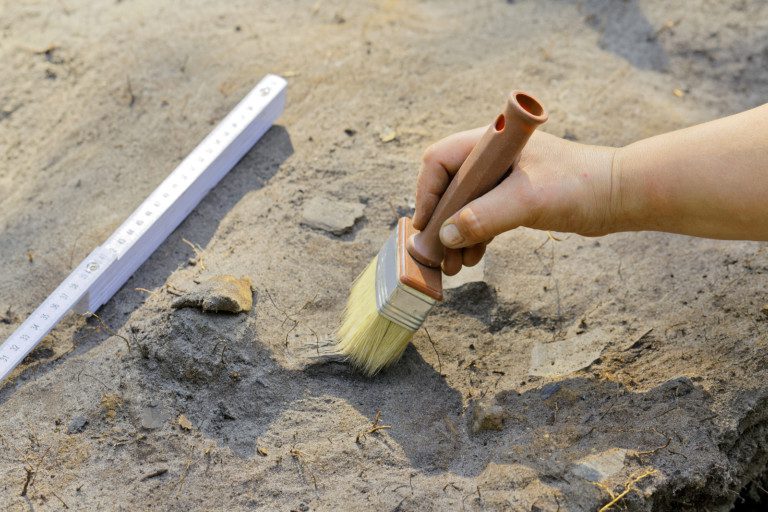 Digging for the Past: The Secrets in Our Own Backyard

The past surrounds us. Sometimes we just need to be informed or made aware of where to look or how to look. For example, we all could be forgiven if we thought that history along the Wasatch front was limited to the time period since the beginning with Mormon colonization. The idea that the past begins when the Mormons arrived here is reinforced as we drive along the Wasatch corridor of I-15. As we pass through each city, signs boasting of their own past stretching into Pioneer times beckoning visitors to a city’s historic cores. We may see signs with statements like “American Fork, Established in 1850” or “Provo, Established in 1849.”

These dates do feel like a long time ago, but they are just a blink of an eye compared to how long humans have been roaming the valleys and mountains of Utah. Not far off the stunning and incredible modern highway of I-15 lie the remains of hundreds of ancient American ruins, dating back 1000, 2000, 3000 years and perhaps even older!

The Provo River delta contains some of the last remaining vestiges of the cultures and peoples that once occupied these Great Basin valleys for thousands of years. The few remaining Fremont Indian mounds, which at one point likely numbered in the hundreds, are being investigated by teams of professors and students from the Brigham Young University Anthropology department in cooperation with the landowners and the Office of Public Archaeology.

On a fine morning in May 2015, I joined the BYU dig with my family and enjoyed many delightful moments of learning from the crew and from the dirt as our shovels, spades, and screens revealed ancient treasures that had long slumbered in the Provo River delta dirt. Many of the finds from this and other regions of Utah and the mountain west are available for view at the newly relocated BYU Museum of People’s and Cultures.

The Provo River delta was as valuable to early Mormon settlers as it was to the ancient Indians. The delta, which is primarily west of I-15 in Provo, created a flat area several square miles large, suitable for farming and dwellings, complete with excellent soil that was regularly refurbished through flooding. With the fresh water of the river constantly available, and an incredibly large supply of fish ready at hand from both Utah Lake and the Provo River, this valley was a paradise of bounty. Parley P. Pratt wrote to his brother Orson, about this abundance in a letter dated July 9, 1849. Unfortunately, continuous development has destroyed most of that fish abundance in Utah Lake as well as eviscerating nearly every trace of human occupation before white settlers arrived (the state of Utah is currently trying to restore the Provo River delta).

People have long inhabited the valleys of the Great Basin. According to some calculations, these areas have been inhabited for 14,000+ years as evident from the thousands of years of occupation levels found in caves near the shores of what used to be Lake Bonneville, such as Danger Cave, Hogup Cave, Spotten Cave, and Deadman Cave. A spear point found in June 1958 in the North Canyon near Bountiful received more than 50 years of thorough study by an amateur anthropologist who wrote a thorough and convincing case that the ancient owner of the spear point lived some 9,000 years ago.

These ancient people loved and lived, perhaps not totally different from us as evident from an archaic period (8000 BC – 500 AD) burial found near Mosida, Utah, that included the remains of a dog curled up in the burial near the human remains. People love their animals today. That attachment was no different anciently, especially since dogs would have been one of the few domesticated animals available to the ancient peoples of this area. Other caves (the Promontory Caves) have yielded items like dice, incised bones, and other materials that suggest the owners played games of chance. In the same cave complex, archaeologists have found hundreds of Great Basin Indian children’s shoes from hundreds ago. Sounds like my kids and their friends always forgetting where they leave their shoes, though they always seem to be placed in the home to serve as a perfect walking hazard.

We should continue to find joy in celebrating the pioneer heritage of these valleys. And we can expand our minds and our hearts further by appreciating the vast expanse of time that the mountains and valleys of Utah have been called home by humans.