Did Joseph Smith Put the New Testament Passages in the Book of Mormon? | Meridian Magazine 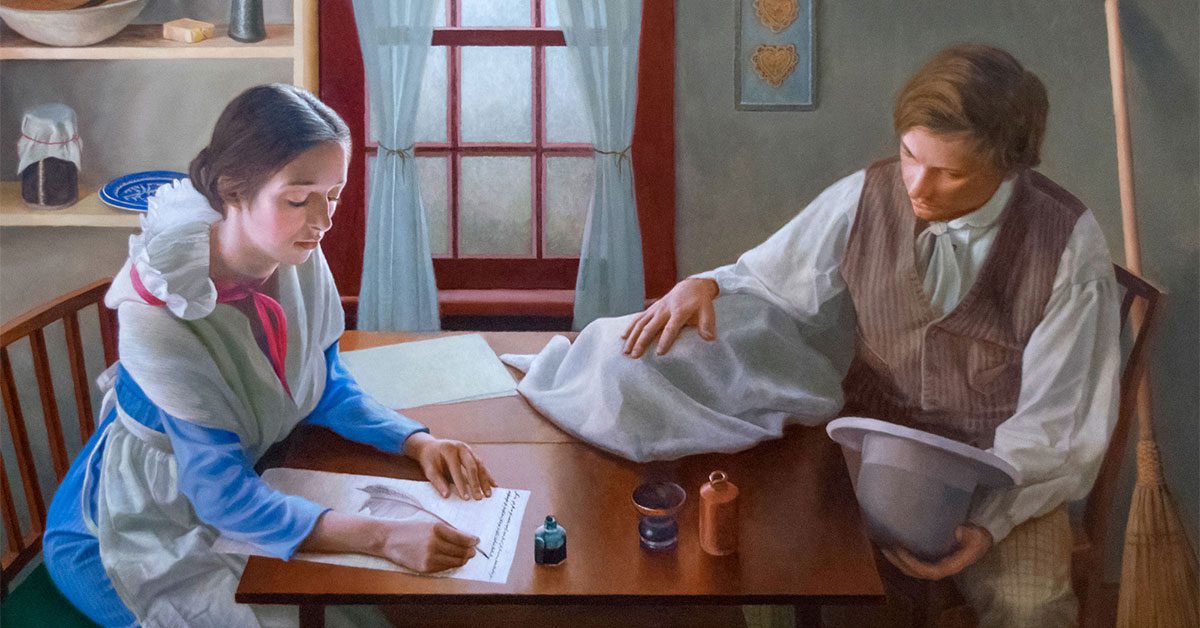 Did Joseph Smith Put the New Testament Passages in the Book of Mormon?

“In due course the plates were delivered to Joseph Smith, who translated them by the gift and power of God.”

The segments in this series, up to this point, have focused on possible ancient sources for the New Testament-type language that is found in the Book of Mormon, working with the assumption that many of these words and phrases would have been found on the plates of Mormon delivered to Joseph Smith. It is also arguable, however, that much of what is recognized as New Testament language first entered into the text of the Book of Mormon at the level of the English translation.1

If this was the case, then the question arises of exactly how and why New Testament phrases, verses, and, at times, entire passages ended up in the English translation of the Nephite text. Was Joseph himself responsible for adding New Testament material beyond what was in the original text? Did he have many parts of the New Testament memorized and was able to recall them verbatim while dictating the text, or did he have a Bible or other manuscript with him, from which he read as he found appropriate?

In giving any answer to these types of questions, it would be helpful to consider how the process of translation may have functioned regarding the Book of Mormon. While Joseph Smith never publicly revealed much about how it worked, in the preface to the 1830 edition of the Book of Mormon, Joseph Smith wrote: “I would inform you that I translated [the book], by the gift and power of God,” a phrase that he repeated often and consistently. When asked for specifics about the process involved, he once asserted that “It was not intended to tell the world all the particulars of the coming forth of the book of Mormon.”2

Scholars who have looked at this issue have suggested theories that fall into at least two camps: that the divine process involved in the translation of the gold plates maintained either (1) a “loose” or (2) a “tight” control over the resulting translation of the text. This KnoWhy (Part 8) will focus mainly on the “loose control” theory of translation, which has been described as follows: “Ideas were revealed to Joseph Smith, and he put those ideas into his own language.”3 A subsequent KnoWhy (Part 9) will analyze the “tight control” or “word-for-word” theory of translation.

In either case, it is quite likely that Joseph Smith, and others in his day, understood and used the word “translate” in certain ways that are not so familiar to readers today. The 1828 Webster’s Dictionary of the American Language included several possible meanings among its definitions of the word “translate,” namely: “To interpret; [or] to render into another language; [or] to express the sense of one language in the words of another.” So, the idea of translating from one language to another, in Joseph Smith’s day could allow some latitude in the meaning of “express[ing] the sense” of one text into a second language. Thus, Joseph’s use of the word “translated” need not necessarily signal a rigid word-for-word or mechanically “literal” translation of the words on the plates. And whether Joseph’s translation process was “tight” or “loose,” it may have resulted in either a “literalistic” or a more “idiomatic functional” translation as it expressed in English the most appropriate meaning of what was on the plates, using English words and phrases familiar to Joseph himself and also understandable by his immediate or subsequent audiences.

And, of course, it is very likely that Joseph Smith’s ordinary language included biblical expressions that were common in the early 1800s. Biblical language saturated American English at that time. Thus, in the theory of “loose control,” it is possible that some of the biblical phrases could have appeared in the translation through Joseph’s natural language, without him thinking consciously about (and perhaps not even being aware of) where those phrases appear in the New Testament (as perhaps was the case with Galatians 5:1/Mosiah 23:13; Ephesians 6:4/Enos 1:1; Philippians 2:12/Mormon 9:27).

It is also conceivable that Joseph may have heard or learned by heart some popular New Testament passages, which the Spirit then called up from his mind as they were then woven into the translation because they made good contextual, although not necessarily literal, sense. Thus, perhaps what we, with careful comparison, identify as New Testament language did not appear precisely that way on the plates. Instead, what prophets and scribes recorded on the plates was close enough to a New Testament thought, saying, or teaching with which Joseph was familiar that the resemblance “primed” his revelatory mode in such a way that the New Testament language came out in the translation.4

While all that is possible, the sizeable number of similarities and how often they are blended seamlessly with unique passages or modified in such sophisticated ways makes it difficult to believe that Joseph was working deliberately from memory. When considering whether Joseph could have produced all of the Isaiah chapters in the Book of Mormon by memory, LDS scholar Kevin Barney argued: “While this is possible, to memorize so many chapters of Isaiah KJV near verbatim would be a prodigious feat indeed.”5

The late LDS apostle Elder B. H. Roberts brought up the possibility that Joseph could have copied out of a Bible when he came across passages that he knew were parallel to biblical scripture. He once postulated: “When Joseph Smith saw that the Nephite record was quoting the prophecies of Isaiah, of Malachi, or the words of the Savior, he took the English Bible and compared these passages as far as they paralleled each other, and finding that in substance, in thought, they were alike, he adopted our English translation.”6

However, one must wonder, is it possible that, when Joseph came across something that seemed similar to a biblical passage, he picked up a copy of the KJV Bible, turned precisely to the right page, found the expression he was looking for, and read it to his scribe?7 There are many problems with the idea that Joseph Smith had and opened a Bible, located verses, and read from it as he went along in the translation process. It is unlikely, for several reasons:

“This explanation [of Joseph reading from a Bible] does not account for the irregularities that we see––some of the alterations increase parallelism or make Isaiah easier to understand, while others fragment the text or make it more obscure … The situation is further complicated by the fact that Joseph’s wife, Emma, asserted that he never worked from a book or manuscript (which would have included the Bible), and there are no reports of Joseph having the kind of prodigious memory that would allow him to quote scripture by the chapter.”8

“The Book of Mormon is of divine authenticity—I have not the slightest doubt of it. I am satisfied that no man could have dictated the writing of the manuscripts unless he was inspired; for, when acting as his scribe, your father would dictate to me for hour after hour; and when returning after meals, or after interruptions, he would at once begin where he had left off, without either seeing the manuscript or having any portion of it read to him.”9

Oliver Cowdery, who served as Joseph’s scribe for most of the translation, likewise saw the process as inspired. He declared, “These were days never to be forgotten—to sit under the sound of a voice dictated by the inspiration of heaven.”10

The witnesses of Joseph’s process of translation of the Book of Mormon agree that it was inspired and miraculous. We do not know for sure how the process of translation worked, except that the work was done, as Joseph always claimed, “by the gift and power of God.” Although the Lord clearly used Joseph Smith, with his faith and intellect, as an instrument to accomplish the English translation, the documentary evidence available strongly suggests that the words of the translation were given to Joseph by revelation and that he somehow “read” (2 Nephi 27:20, 24)11 and then dictated those words to his scribes.

The next KnoWhy in this series will thus turn greater attention to the likelihood that New Testament phrases and passages were introduced into the Book of Mormon translation through a “tight control” or “word for word” revelation of the text.

Brant Gardner, “The Gift and Power: Translating the Book of Mormon,” presentation given at the 2011 FAIR Conference.

Royal Skousen, “How Joseph Smith Translated the Book of Mormon: Evidence from the Original Manuscript,” Journal of Book of Mormon Studies 7/1 (1998): 22–31.

1.That is, of course, beyond New Testament teachings that were directly taught or revealed by Christ, such as the teachings that parallel the Sermon on the Mount in 3 Nephi 12–14, and other similar examples.

3.Royal Skousen, “How Joseph Smith Translated the Book of Mormon: Evidence from the Original Manuscript,” Journal of Book of Mormon Studies 7, no. 1 (1998): 24.

11.In 2 Nephi 27:20, 24 the translator is going to “read” the words of the book. D&C 3:12 explains that the Lord gave Joseph Smith “sight and power to translate.” Mosiah 8:13 declares that a seer has “wherewith he can look and translate.” These passages make a good case for the idea that there was a visual aspect to the process of revelation of the English translation of the Book of Mormon.