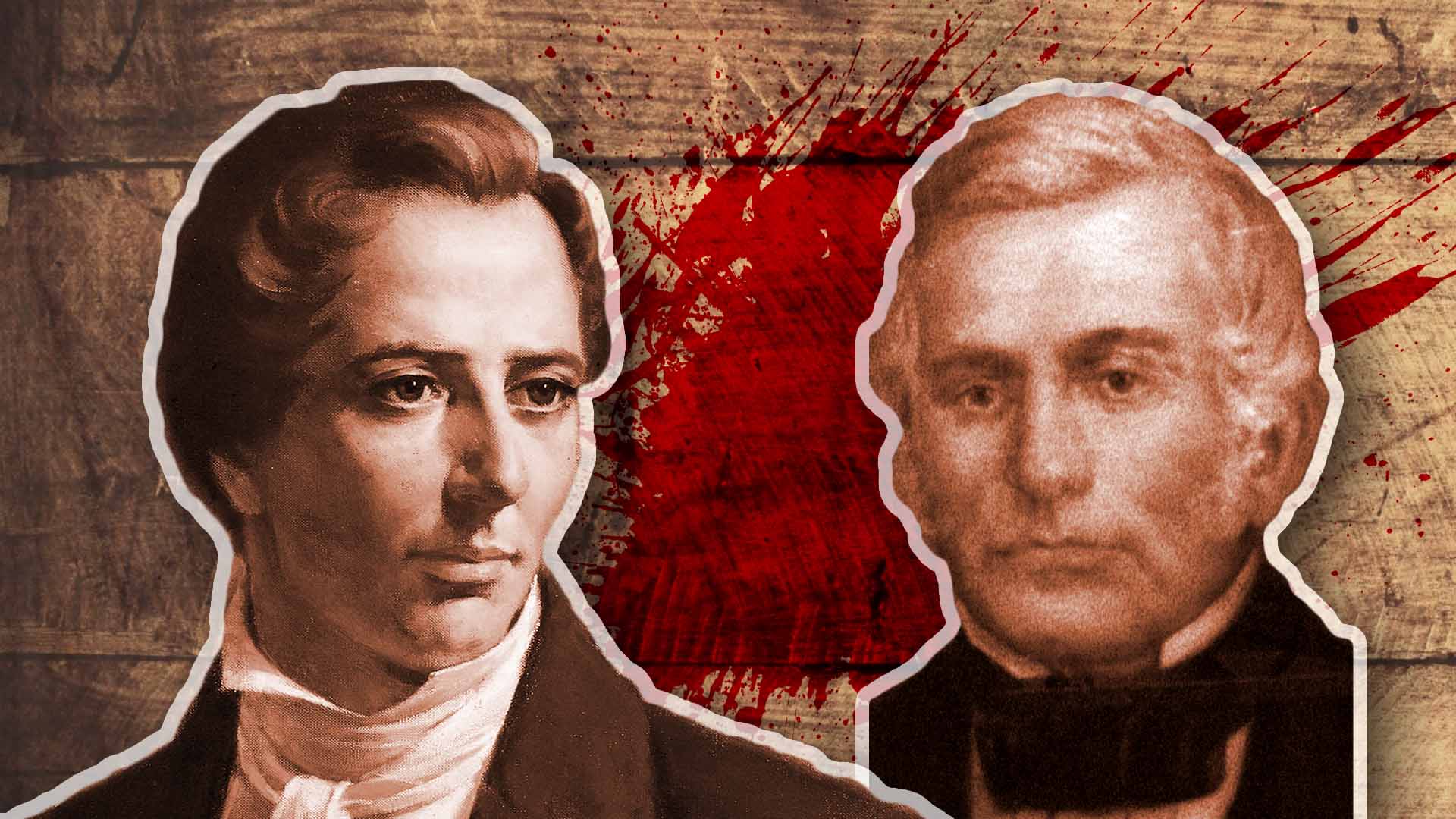 “Forasmuch as the Lord has revealed unto me that my enemies, both in Missouri and this State, were again in the pursuit of me . . . , I have thought it expedient and wisdom in me to leave the place for a short season. . . . When I learn that the storm is fully blown over, then I will return to you again.” Doctrine and Covenants 127:1

When an unknown assailant unsuccessfully attempted to kill former governor Lilburn Boggs in 1842, suspicion of many in Missouri turned toward Joseph Smith and the Latter-day Saints. And after all, they had been victims of Boggs’s 1838 Order of Extermination. This assassination attempt and the subsequent accusations resulted in Joseph Smith going voluntarily into hiding for the rest of the 1842, until prevailing in a federal circuit court in Springfield, Illinois in      January of 1843. Despite suggestions that Joseph Smith was involved in the Boggs assassination attempt, no evidence has ever surfaced to implicate Joseph Smith or his associates in the crime.

The Assassination attempt of Lilburn Boggs

On May 6, 1842, former governor Lilburn Boggs was sitting in his parlor reading the evening newspaper when an unidentified shooter fired several rounds through the window and hit Boggs in the head and neck. Amazingly, this incident did not kill Boggs, and he eventually made a full recovery. The discharged pistol was left at the scene of the crime as well as some footprints outside the window, but police investigators were unable to identify the assailant based on this limited evidence.1

It wasn’t long before accusations and rumors started swirling around the Latter-day Saints, whom Boggs had violently expelled from Missouri years earlier with the 1838 Order of Extermination.2 John C. Bennett, who recently had been excommunicated from The Church of Jesus Christ of Latter-day Saints for his dishonest and adulterous behavior, fueled rumors that Joseph Smith had sent Porter Rockwell to “fulfill prophecy” and assassinate Boggs.3

The Latter-day Saints certainly weren’t fond of Governor Boggs since he instigated atrocities against the Saints and was a symbol of persecution for them. Wilford Woodruff recorded in his journal that Boggs was an “ungodly wretch” that had “fallen in the midst of his iniquities” by an unknown hand.4 An anonymous submission to the Nauvoo Wasp read, “Boggs is undoubtedly killed, according to report; but Who did the Noble Deed remains to be found out.”5

But Joseph Smith and the Saints were not the only suspects, as Boggs had accumulated plenty of political and ideological enemies over the years. At the time he was attacked, he was running for state senate. Many of his constituents disapproved of his handling of an armed clash over a border dispute with Iowa, and others questioned the suspicious way that he raised money for a brand-new capitol building.6 A silversmith named Tompkins was a leading suspect for a time. However, a citizens’ committee cleared Tompkins of responsibility.7

Despite the Saints’ having motive for wanting Boggs out of the picture, Joseph Smith and the Saints firmly denied any involvement in the crime, and no evidence ever surfaced to convict any of them. Joseph Smith publicly declared, “He died not through my instrumentality. My hands are clean, and my heart pure from the blood of all men.”8

By the end of July three months later, Boggs was persuaded that the Latter-day Saints had a hand in his attempted assassination so he signed an affidavit asserting that Joseph Smith was an accessory to his intended murder. This prompted the new governor of Missouri, Thomas Reynolds, to issue a legal requisition from the state of Illinois for the extradition of Joseph Smith and Porter Rockwell.9

Joseph Smith challenged this extradition with a writ of habeas corpus from the Nauvoo municipal court, not only because he believed himself innocent of the crime but also because he believed the extradition unconstitutional and that Boggs had no evidence to the contrary. According to contemporary law, a governor of one state could require extradition from the governor of another state if they were attempting to arrest a fugitive who fled from the state. However, regardless of Joseph Smith’s theoretical involvement in the crime, he was not in Missouri when it was committed and did not flee the state. He believed that he could not be extradited from Illinois to stand trial in Missouri since he never left Illinois and thus could not have been in Missouri.10 This writ left the arresting sheriff uncertain, so he left to consult with his superiors. Because he took the arrest warrants with him, Joseph Smith and Porter Rockwell were released from custody. Joseph Smith then went into hiding to evade what he considered unlawful arrest.11

After the better part of eight months of evading the Missouri authorities, Joseph Smith submitted himself to arrest when a new Illinois governor came to power and seemed to be more sympathetic to Joseph Smith and the plight of the Saints. Joseph’s court hearing was held on January 6, 1843, in the federal US circuit court in Springfield, Illinois, amid considerable sensation and commotion toward the “Mormon prophet” and his entourage. Judge Nathaniel Pope ruled that Lilburn Boggs produced insufficient evidence to warrant an extradition from Illinois. Pope said,

Boggs was shot on the 6th of May. The affidavit was made on the 20th of July following. Here was time for inquiry, which would confirm into certainty or dissipate his suspicions. He had time to collect facts to be laid before a grand jury, or be incorporated in his affidavit. The court is bound to assume that this would have been the course of Mr. Boggs, but that his suspicions were light and unsatisfactory.12

This hearing did not rule on the merits of the underlying crime. No court ever determined if Joseph Smith was guilty of participating in Boggs’s assassination. Instead, it simply ruled that Boggs’s affidavit contained insufficient evidence to support the claim that Joseph Smith had fled from justice in Missouri.13 After months of hiding and being away from friends and family, Joseph walked free.14

Despite being relentlessly pursued for a crime he did not commit, Joseph Smith remained optimistic and encouraging toward the Saints. During this period of hiding, he wrote two letters that eventually were canonized as Doctrine and Covenants sections 127 and 128, which detail some of the logistical and practical aspects of performing baptisms for the dead.

It’s possible that his experience dealing with the technicalities of the Constitutional extradition law helped Joseph Smith to realize the importance of solidifying structures and procedures for performing and recording sacred ordinances. His success over the Missouri extradition attempt certainly underscored the importance of adhering to the fine details of the law for ensuring the execution of justice. In Doctrine and Covenants 127 and 128, Joseph Smith outlined in detail the importance and duties of a recorder so that baptisms could be performed correctly, consistently, in a proper place, and in an organized fashion. Proper administration and recording of these ordinances ensure that God’s house is a house of order and that the work of salvation can be extended to more of God’s children.

While Doctrine and Covenants 127 and 128 deal with logistics, the letters also contain inspiring content on the gospel of Jesus Christ.15 In these letters, Joseph Smith expounded on the doctrine of sealing on earth and heaven, the symbolism of baptism as begetting death unto new life, the evidence in the New Testament for baptism for the dead, the necessity of doing temple work for our ancestors, and of recording those ordinance on earth so that they are equally recorded in heaven.

Joseph Smith’s hiding in 1842 highlight how revelation can come despite and because of adversity. Of Joseph’s period of hiding, Wilford Woodruff said, “The Lord is with him as he was upon the Isle of Patmos with John.”16 Just as John the Revelator experienced spiritual manifestations during his imprisonment, Joseph Smith still received priceless revelation from heaven during his voluntary exile. In the face of his persecution, he boldly and emphatically declared,

Brethren, shall we not go on in so great a cause? Go forward and not backward. Courage, brethren; and on, on to the victory! Let your hearts rejoice, and be exceedingly glad. Let the earth break forth into singing. Let the dead speak forth anthems of eternal praise to the King Immanuel, who hath ordained, before the world was, that which would enable us to redeem them out of their prison; for the prisoners shall go free. (Doctrine and Covenants 128:22)

2.David W. Kilbourne, a postmaster in Montrose, Iowa, wrote to Missouri governor Thomas Reynolds accusing Joseph Smith of inciting the crime. See D. W. Kilbourne to Thomas Reynolds, May 14, 1842, “Thomas Reynolds Letters,” cited in Morris A. Thurston, “The Boggs Shooting and Attempted Extradition: Joseph Smith’s Most Famous Case,” BYU Studies Quarterly 48, no. 1 (2009): 9–10. An Illinois newspaper argued that the Saints were behind the attack since Joseph had purportedly once prophesied of Boggs’s violent demise. See “Assassination of Ex-Governor Boggs of Missouri,” Quincy Whig, May 21, 1842, [3].

14.After Joseph’s favorable court decision, Porter Rockwell, who had been hiding in Pennsylvania and New Jersey, decided to return to Nauvoo. He was spotted and arrested by a bounty hunter on his return journey and languished in prison for nine months before appearing before a jury, who determined that there was insufficient evidence to indict or convict Rockwell for any crimes against Lilburn Boggs. See Thurston, “Boggs Shooting and Attempted Extradition,” 52–54.

16.Wilford Woodruff Journal, September 19, 1842. See Matthew McBride, “Letters on Baptism for the Dead,” in Revelations in Context: The Stories behind the Sections of the Doctrine and Covenants, ed. Matthew McBride and James Goldberg (Salt Lake City, UT: The Church of Jesus Christ of Latter-day Saints, 2016).