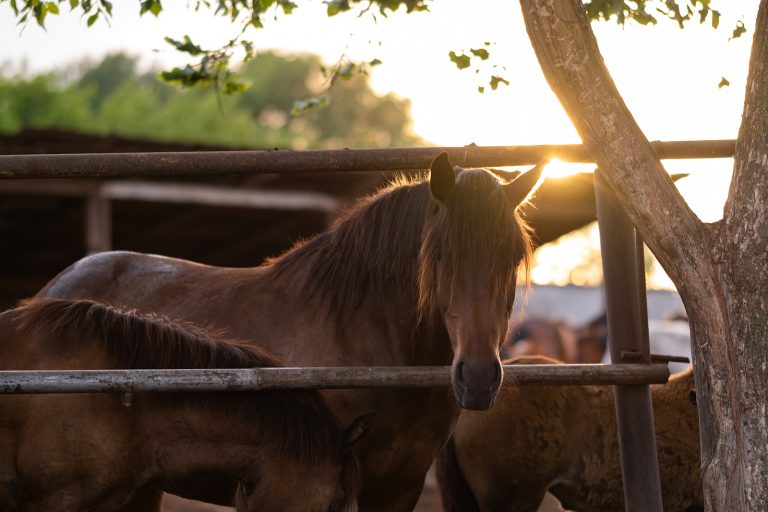 To provide money for my family I did many different jobs while I was in graduate school. One job I enjoyed was taking care of race horses in the evenings and on weekends. The horses were beautiful, high-spirited animals.

I never rode them; that was the job of a jockeys. But I did work to help train them, to feed them, and mostly to clean out their barns. I learned to love every one of the horses with the exception of one. He was a young stallion, just coming into breeding age.

Because all of the other horses were trustworthy, I made the mistake of thinking he was, as well. But I soon learned that I could never turn my back on him. That knowledge came through experience. The very first time I cleaned out his small barn, I turned my back to fork out the mucky straw. Without any other warning, I heard a snort right behind me. I turned in time to see him rearing above me. He came down, catching me with a hoof hard in the shoulder, knocking me to my back on the ground.

He reared again, and as he came down, I rolled out of the way as his hoofs crashed to the ground where I had originally fallen. As he reared again, I rolled once more, this time to the pitchfork that had been knocked from my grasp when he first hit me. As his hooves hit the ground beside my head, just missing me, I swung the fork with all of my strength, smashing the flat back of its tines to the side of his head. This drove him back far enough that I could scramble to my feet.

The next time he reared I was ready for him. I didn’t want to scar this beautiful animal, but I still had to defend myself. I swung the flat back of the tines once more, but this time I caught him across the soft part of the nose as he tried to attack me. He stumbled back and then moved off. We faced each other, and he snorted and reared, but didn’t come close enough to really threaten me. As I moved out of the pen to get some ice for my shoulder, I kept a vigilant eye on him. I never turned my back on him again.

However, one day the horses’ owner had come to check on them. Barbara was seldom home from her many travels more than one or two weekends in a month. I was working far across the yard cleaning other horse pens, when I heard the young stallion snort. That was not unusual, as he often snorted and whinnied. I normally wouldn’t have paid any attention, but for some reason, it was like something in my head yelled, “Run now!”

Without even questioning the thought, I turned and raced toward the stallion pen. Everything happened so quickly I can’t remember half of it. I reached the pen in seconds, and seeing the stallion reared back, I vaulted the gate.

How or where I ended up with a shovel in my hand, I have no idea. I must have grabbed it somewhere as I ran, though I cannot remember doing so. But as I landed in the pen, the shovel was indeed in my hands. The horse was already coming down toward Barbara, who was lying flat on her back, with her arm across her face, trying to protect herself. I swung the flat, backside of the shovel with all my strength, hitting the horse in the shoulder.

It was just enough so that his hooves missed their mark and came down beside her. With one quick grab, I caught her arm and pulled her back, and then stepped up to protect her even as the horse rose again. I was not able to get in a good position and took part of the next blow from his hooves, using the shovel to absorb some of his attack. I stumbled back, but by the time he reared the next time, I was ready to meet him. I was able to drive him back, and then, keeping an eye on him and the shovel ready, I returned to help Barbara to her feet.

The young stallion snorted and reared at the other end of his pen, but seemed wary of me as I assisted her through the gate and latched it behind us. She dropped, panting, onto a nearby hay bale. We at first thought her arm was broken, but found out later that it was only badly sprained.

She turned to thank me, even as the tears from her pain rolled down her face. “If you had been even a second later, I’m sure he would have killed me. How did you know to come to my rescue?”

I couldn’t even answer that. I only knew that something in me said to run, and I had no idea where I picked up the shovel.

I just shrugged. “I guess you must have a good guardian angel.”

She smiled at me. “Maybe I have two of them.”