Come, Follow Me: “Lift Up Your Head and Be of Good Cheer”, 3 Nephi 1-7 | Meridian Magazine 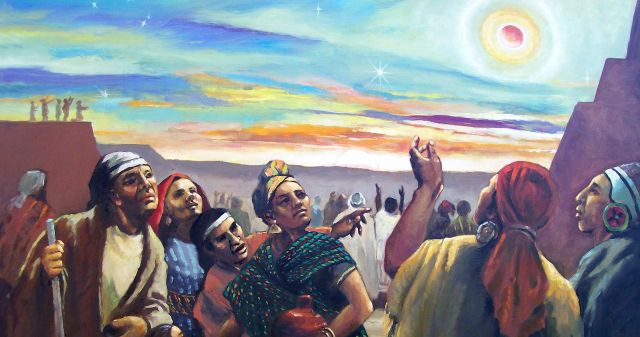 Cover image: One Day, One Night, and One Day, by Jorge Cocco.

The Book of Mormon is a pattern for the life of a disciple of Christ. In its pages, we are invited to “come unto Him,” because He is surely “coming unto us” if we invite Him and welcome His coming—in our daily lives and at that “great day of His coming.”

Disciples of Christ love the idea of His coming. He brings peace to our troubled hearts, so each day we should invite Him again to come into our lives.

3 Nephi 1-7 is about people who long for His coming. It’s about how they live so they’ll be ready. This passage is also about people who dread, deny, or disregard His coming, and the misery that overtakes them. The object of this lesson is to help us (1) invite Him to come in our lives; (2) prepare for the great day of His coming; and (3) deal with the deadly distractions that could spoil the welcome we want to give Him.

In 3 Nephi 1, the Saints who yearn for the coming of Christ into the world are pitted against others who mock the idea of His coming. “We live in a time of turmoil,” says President Russell M. Nelson, and so did the Nephites. The signs of His return are coming thick and fast, as in Nephi’s day. “The prophecies of the prophets began to be fulfilled more fully; for there began to be greater signs and greater miracles wrought among the people” (3 Nephi 1:4). Ours too is a day of “greater signs and greater miracles,” the greatest of which is the rise of the Church of Jesus Christ.

The forces of opposition are strong, as in Nephi’s day. “There were some who began to say that the time was past” for the coming of Christ. “Your faith concerning this thing hath been vain.” We hear the same words today, which cause the same kind of “uproar throughout the land.” The Nephites were “very sorrowful” to hear these voices, as are we, but “they did watch steadfastly for that day” regardless. (1:6-7). And so must we. To be steadfast is to be “resolute, dutifully firm, and unwavering.” This is how we must “watch” for the day. This is our present task.

“Now there was a day set apart by the unbelievers, that all those who believed in those traditions should be put to death except the sign should come to pass” (1:9). We are not yet under that kind of threat, but President Nelson warns, “Difficult days are ahead. Rarely in the future will it be easy or popular to be a faithful Latter-day Saint. Each of us will be tested. The Apostle Paul warned that in the latter days, those who diligently follow the Lord ‘shall suffer persecution’ (2 Tim. 3:12). That very persecution can either crush you into silent weakness or motivate you to be more exemplary and courageous in your daily lives” (“The Future of the Church,” General Conference, April 2020).

The people of Nephi were “exemplary and courageous” in their trials. “They cried mightily unto the Lord” to deliver them, and so must we. We can do no less in the face of the threats to our faith and our families.

The Lord’s answer to the Nephites—and to us: “Lift up your head and be of good cheer.” Why be “of good cheer”? Because, as He says, “I come into the world, to show unto the world that I will fulfil all that which I have caused to be spoken by the mouth of my holy prophets” (1:13). He did come to the world, and He did “fulfil all things.” We must remember that He carries out every promise He makes to those who are true and faithful to their covenants.

Jesus Christ always fulfills all His promises. The Nephites learned that lesson on the night of His birth: “There was no darkness in all that night, but it was as light as thought it was midday. . . . also a new star did appear” (1:19, 21).

Every prophecy of Samuel the Lamanite came true exactly and precisely: “Yea all things, every whit, according to the words of the prophets” (1:20). The Hebrew phrase translated as “every whit” (kol ha-debarim) literally means “every word” (see 1 Samuel 3:18). Not one word spoken by a “holy prophet” should be disregarded. Every single word will be fulfilled. How important, then, is it to pay strict attention to our prophet’s words today?

When after the birth of Christ some overzealous Nephites started teaching that “it was no more expedient to observe the law of Moses,” Nephi swiftly corrected them. “The law was not yet fulfilled,” he taught. “It must be fulfilled; yea, not one jot or tittle should not pass away till it should all be fulfilled” (1:25). They learned not to make assumptions or to “second-guess” the Lord but to give strict attention to His commandments. We also learn from this anecdote that the Lord can change His requirements from time to time—but it’s not up to us either to anticipate those changes or to complain when they come.

Most of the Nephites were astonished by the signs of the birth of Christ and were “converted unto the Lord.” However, there also “began to be lyings sent forth among the people by Satan, to harden their hearts, to the intent that they might not believe in those signs and wonders which they had seen” (1:22). Some people listened to the lies. After only a few years, “the people began to forget those signs and wonders . . . insomuch that they began to be hard in their hearts” (2:1).

This common pattern of deceit drags down people who depend too much on “signs and wonders” and never become “converted unto the Lord.” They “began to disbelieve all which they had heard and seen—imagining up some vain thing in their hearts, that it was wrought by men and by the power of the devil” (2:1-2). Eventually, people who base their conversion on miracles lose faith in their own memories and even in the evidence of their own senses. Alternative explanations can be found for any miracle. True conversion rests on the witness of the Spirit.

Many of the Nephites were susceptible to disbelief, especially those of the “rising generation” (1:30) too young to experience the wonders of the birth of Christ. “And Satan did go about, leading away the hearts of the people.”

How do we protect ourselves and our families against Satan’s project to destroy faith?

A helpful example is the experience of Lachoneus, governor of the Nephites, who were threatened with destruction by Gadianton robbers. Lachoneus was a “just man, who could not be frightened” by the Gadianton menace. His response to the threat is instructive in what we should do to protect our families.

First, Lachoneus “sent a proclamation among all the people, that they should gather together their women, and their children, their flocks and their herds, and all their substance . . . into one place” (3:13). The first thing we should do is make sure we “gather” our families around us often. We should not abandon them to the many sources of destruction that are around us. They need to hear our voices as we teach the gospel and pray together. Our mission as Latter-day Saints is to “gather” not only our families but as many of our Father’s children as possible and bring them to Christ.

Mormon observes here that “as surely as the Lord liveth, will he gather in from the four quarters of the earth all the remnant of the seed of Jacob, who are scattered abroad upon all the face of the earth” (5:24). The most important work we have to do in this life is to help the Lord gather his family together. President Nelson says, “A necessary prelude to that Second Coming is the long-awaited gathering of scattered Israel. . . . We not only teach this doctrine, but we participate in it. We do so as we help to gather the elect of the Lord on both sides of the veil” (“Future of the Church”).

Second, Lachoneus “caused that fortification should be built round about them, and the strength thereof should be exceedingly great” (3:14).  What kind of “fortification” do we need to build around our families? How can we make that protective wall “strong and exceedingly great”? We put up a symbolic wall around our children by making sure they know who they are. President Nelson says, “Strength comes when you remember that you have a divine nature, an inheritance of infinite worth.” Remind your family members of this truth again and again until nothing unworthy can dislodge it from their hearts.

He also put “guards round about to watch them, and to guard them day and night.” We are the guardians of our families. There are many ways of abandoning children beyond leaving them. Parents abandon children by letting them do whatever they want without guidance, or by sloughing off their responsibility to teach their children the gospel onto someone else. We are accountable for guarding them from the “robbers” who will steal their minds with falsehoods or  endless entertainment and their hearts with destructive relationships.

Finally, Lachoneus “said unto them: As the Lord liveth, except ye repent of all your iniquities, and cry unto the Lord, ye will in nowise be delivered out of the hands of those Gadianton robbers” (3:15). We teach our families to “cry unto the Lord.” This is more than just perfunctory prayer; it means praying until we feel the Spirit and understand the fervor and warmth of being filled with the Holy Ghost.

Also, we teach our families to repent. President Nelson says, “Nothing is more liberating, more ennobling, or more crucial to our individual progression than is a regular, daily focus on repentance” (“We Can Do Better,” General Conference, April 2019). Teach the family that repentance is not a one-time thing—it’s a privilege we can exercise every day. When we repent, we invite the spirit of Christ into our lives to give us the strength to change, to grow, and to improve.

If we will do these things—gather our families, fortify them with truth, pray with them, and teach them to repent—we will greatly strengthen them against Satan’s effort to possess their hearts.

The impertinent Gadianton chief Giddianhi tried to intimidate and deceive the people of Lachoneus (3:1-10); in fact, Lachoneus was “astonished” at the boldness of Giddianhi’s threat. The governor could have given way to fear of Giddianhi and his terrifying band, but he protected his people by taking these simple measures. Ultimately, Giddianhi and his minions were starved out and slain by the power of God, who was with Lachoneus.

We can wring our hands, tremble, and surrender in the face of the evil powers trying to destroy our families; or we can do as the courageous governor Lachoneus did. Then we will rejoice as he did, in “praising their God for the great thing which he had done for them, in preserving them from falling into the hands of their enemies” (4:31). If we will only follow Christ, He will lead us along the “covenant path” of safety for ourselves and those we love.