Come, Follow Me for Sunday School: “Ye Shall Be Witnesses unto Me” Acts 1-5 | Meridian Magazine 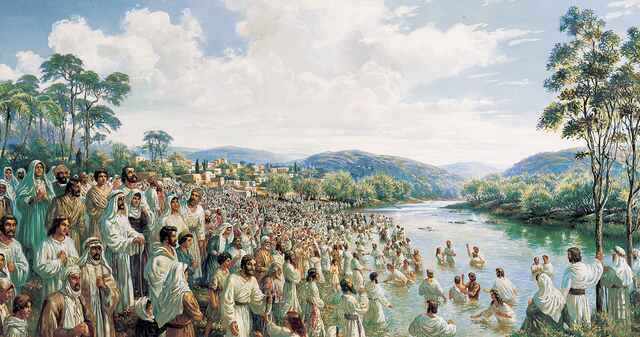 Come, Follow Me for Sunday School: “Ye Shall Be Witnesses unto Me” Acts 1-5

In Acts 1-5 Luke gives the account of the 40-day ministry of Christ after the resurrection, the outpouring of the Spirit upon the apostles at the feast of Pentecost, and the miraculous healing of a lame man. In this inspiring story, we learn how to testify and teach the gospel as the apostles did. We learn about apostolic succession and the gift of tongues. We learn about the importance of “looking unto” the Lord and His apostles for the miracles we need in life. And all of these lessons are focused on one place—the Temple.

In Acts 1 we have the fascinating and baffling declaration that Jesus Christ passed forty days with his apostles after the resurrection. Luke says that Jesus spent that time “speaking of the things pertaining to the kingdom of God.” But we don’t get to hear any of those things. This is a story without a story!

What was so important that it took the Lord forty days to communicate it to his disciples? What “things pertaining to the kingdom” did he speak of? We simply don’t know.

But there are hints in the scriptures and in certain apocryphal materials that might suggest an answer. In verse 1 Luke tells us that up to that point he has only described what Jesus “began both to do and teach”; in other words, the entire wonderful gospel of Luke that comes before Acts is just the beginning of the teachings of the Savior. What more did He have to do and teach that He hadn’t done and taught before?

In verse 2 we learn that he gave “commandments” to the apostles during that period. The word “commandments” is translated “further instructions” in more modern versions (see Acts 1:2 in the New Living Translation and the New International Version). What did those instructions consist of?

Some things are clear from the text. In verse 3 we learn that “he shewed himself alive after his passion by many infallible proofs.”  The Greek word translated as “infallible proofs” is tekmerioi, which is probably better translated as “sure signs.” These are marks or signposts supplying indisputable information perhaps agreed upon in advance (see Wenceslao Castanares, “Lines of Development in Greek Semiotics,” Cultura: International Journal of Philosophy of Culture and Axiology,  2012, vol. 9, no. 2, 13-14).

Scholars note that many very ancient apocryphal (outside of scripture) writings profess to tell about those things Jesus taught in the 40-day ministry. They speak of things “such as washings and anointings and receiving special clothing . . . an account of a heavenly council, a war, and an expulsion of rebellious offspring of God.”  Jesus explains that “after his death he went to the spirit prison and taught salvation to those who were there. Another common element in apocryphal literature is the secrecy enjoined upon those who receive these teachings” S. Kent Brown, C. Wilfred Griggs, “The 40-Day Ministry,” publications.mi.byu.edu)

Perhaps it was due to the confidential nature of those teachings that Luke does not describe them in the book of Acts. Did the Lord give the apostles in that 40-day meeting higher knowledge and ordinances than He had given them in his mortal ministry?

Then, just before He ascended to heaven, He told them “ye shall receive power, after that the Holy Ghost is come upon you: and ye shall be witnesses unto me . . . unto the uttermost part of the earth” (Acts 1:8).  Whatever “further instructions” the apostles received, they went forth from that 40-day meeting with power and unshakable confidence in their callings. Two angels stood by them as the Lord was taken up: “Ye men of Galilee,” they said, “why stand ye gazing up into heaven? This same Jesus, which is taken up from you into heaven, shall so come in like manner as ye have seen him go” (Acts 1:10-11).

The eleven apostles then selected Mathias, a new witness to join them in place of Judas Iscariot and began their work. This first instance of apostolic succession indicates clearly that a council of twelve apostles is essential to that work. “One must be ordained to be a witness with us,” Peter says, indicating that this step is necessary (Acts 1:22).

For one week after the Ascension, the Twelve “continued with one accord in prayer” in a private room,  joined by “the women” and the mother and brothers of Jesus. The expression “with one accord” (homothymadon) could be translated “of the same feeling.”   They held this prayer circle every day  until the end of the week “when the day of Pentecost came.”

Pentecost is significant day in the Jewish calendar. “Pentecost” (from the Greek word meaning “fiftieth”), or Shavuot, “the feast of weeks,” falls on the fiftieth day after the Passover Sabbath Because Shavuot is traditionally cited as the day Moses gave the law to Israel on Mt. Sinai, the day also commemorates the entry of the entire Jewish people into the covenant. Known as the “festival of weeks,” or Shavuot,” this was one of the holy occasions when all Israel gathered at the Jerusalem temple for prayer (see Lev. 23:16-17).

Like the apostles, therefore, Jews “from every nation under heaven,” speaking many languages, thronged the temple. On  the third hour (about 9 a.m.) the morning prayer and sacrifice were being offered; just at that moment, when the incense symbolizing Israel at prayer was rising up to God, an extraordinary event took place.

“Suddenly there came a sound from heaven as of a rushing mighty wind, and it filled all the house where they were sitting. And there appeared unto them cloven tongues like as of fire and it sat upon each of them. And they were all filled with the Holy Ghost, and began to speak with other tongues, as the Spirit gave them utterance” (Acts 2:2-4).

An early Christian leader, Leo the Great, describes Pentecost this way: “As once to the Hebrew people, freed from Egypt, the law was given on Mt. Sinai on the fiftieth day after the sacrifice of the lamb, so after the Passion of the Christ when the true Lamb of God was killed, on the fiftieth day from his Resurrection, the Holy Spirit came down on the apostles and the community of believers” (“Pentecost,” The Fathers of the Church, Catholic University of America, vol. 93, p. 331).

The commotion caused a crowd to gather who “were confounded, because that every man heard them speak in his own language. And they were all amazed and marvelled, saying one to another, Behold, are not all these which speak Galilaeans? And how hear we every man in our own tongue, wherein were born?” (Acts 2:6-12)  Eastern Jews from Mesopotamia, northern Jews from Asia, southern Jews from Egypt, western Jews from Rome—in other words, Jews from every point of the compass surrounded the apostles to hear their teaching. Like so many of our missionaries today, the apostles were endowed with the gift of tongues so they could communicate the gospel across the language barrier.

As Moses discoursed on the old covenant at Mt. Sinai, Peter, the presiding apostle and prophet of the Lord, arose from among the eleven to give a discourse on the new covenant. Blessed with the gift of tongues, Peter testified of the Atonement of the Savior in language everyone hearing him could understand: “Ye men of Israel, hear these words; Jesus of Nazareth, a man approved of God among you by miracles and wonders and signs, . . . ye have taken, and by wicked hands have crucified and slain: whom God hath raised up, having loosed the pains of death” (Acts 2:22-24).

Peter then showed by the prophecies of the Old Testament that Jesus was the Messiah: “Let all the house of Israel know assuredly, that God hath made that same Jesus, whom ye have crucified, both Lord and Christ” (Acts 2:36).

When the people heard this, “they were pricked in their heart.” In Greek the word is “pierced through, pained sharply, agitated vehemently.” They were conscience smitten and pleaded with Peter, “What shall we do?” What could they possibly do to make up for what they had done to the Savior?

Peter then sums up in succinct terms the first principles of the gospel of Jesus Christ: “Repent, and be baptized every one of you in the name of Jesus Christ for the remission of sins, and ye shall receive the gift of the Holy Ghost” (Acts 2:38).

Many in the crowd were touched: “The same day were added unto them about three thousand souls,” the first fruits of the apostles’ mission—very appropriate, as the Bible calls Pentecost the “feast of the first fruits” (see Lev. 23:16-17; Num. 28:26).

Joining with the apostles, these new believers continued “daily with one accord in the temple” (Acts 2:44). Why did the church gather every day “with one accord” and “singleness of heart” at the temple? A likely answer: To conduct prayer circles. Even today, Jews gather at the Western Wall, the only remnant of the ancient temple in Jerusalem, to continue the ancient practice of forming prayer circles.

Another important reason for the apostles to gather at the temple was to perform missionary work.

Whether it was the same day of Pentecost or another day soon after, Peter and John returned to the temple “at the hour of prayer, being the ninth hour” (Acts 3:1). This was the official afternoon sacrifice (around 3 p.m.) when Jews in Jerusalem would gather to pray in the temple courts. It was also an opportune time for the apostles to preach to the assembled crowds about the new covenant of the gospel.

As Peter and John entered the “gate of the temple which is called Beautiful,” they encountered a lame man asking for alms from the passersby. Many beggars probably thronged this gate, which led into the public area or “court of women.” Peter “fastening his eyes” on the lame man, said to him, “Look on us” (probably better translated as “Look unto us”). “Silver and gold have I none,” said Peter, “but such as I have give I thee. In the name of Jesus Christ of Nazareth rise up and walk.” Peter took the man by the right hand, and the man leaped up, his feet and ankles restored to health (Acts 3:2-8).

Like the lame man, we have the privilege of “looking unto” prophets and apostles for help and receiving far more than we expect. The lame man was only hoping for a few coins but was completely healed instead. What might happen if we were to turn to the Lord and His servants for answers to our problems? Might we also be overwhelmed with blessings? They might not be “silver and gold” blessings, but “such as the Lord has” He is willing to give us—everything we could possibly desire. When we consider our blessings, shouldn’t we also be “leaping and praising God” as the lame man did?

Thank you for sharing your insights to these beautiful teachings m! I currently serve in Primary and I look forward through reading your lessons. Your tremendous preparation is a blessing to me.