Come, Follow Me for Sunday School: “They Were Called the People of God”, Mosiah 25-28 | Meridian Magazine 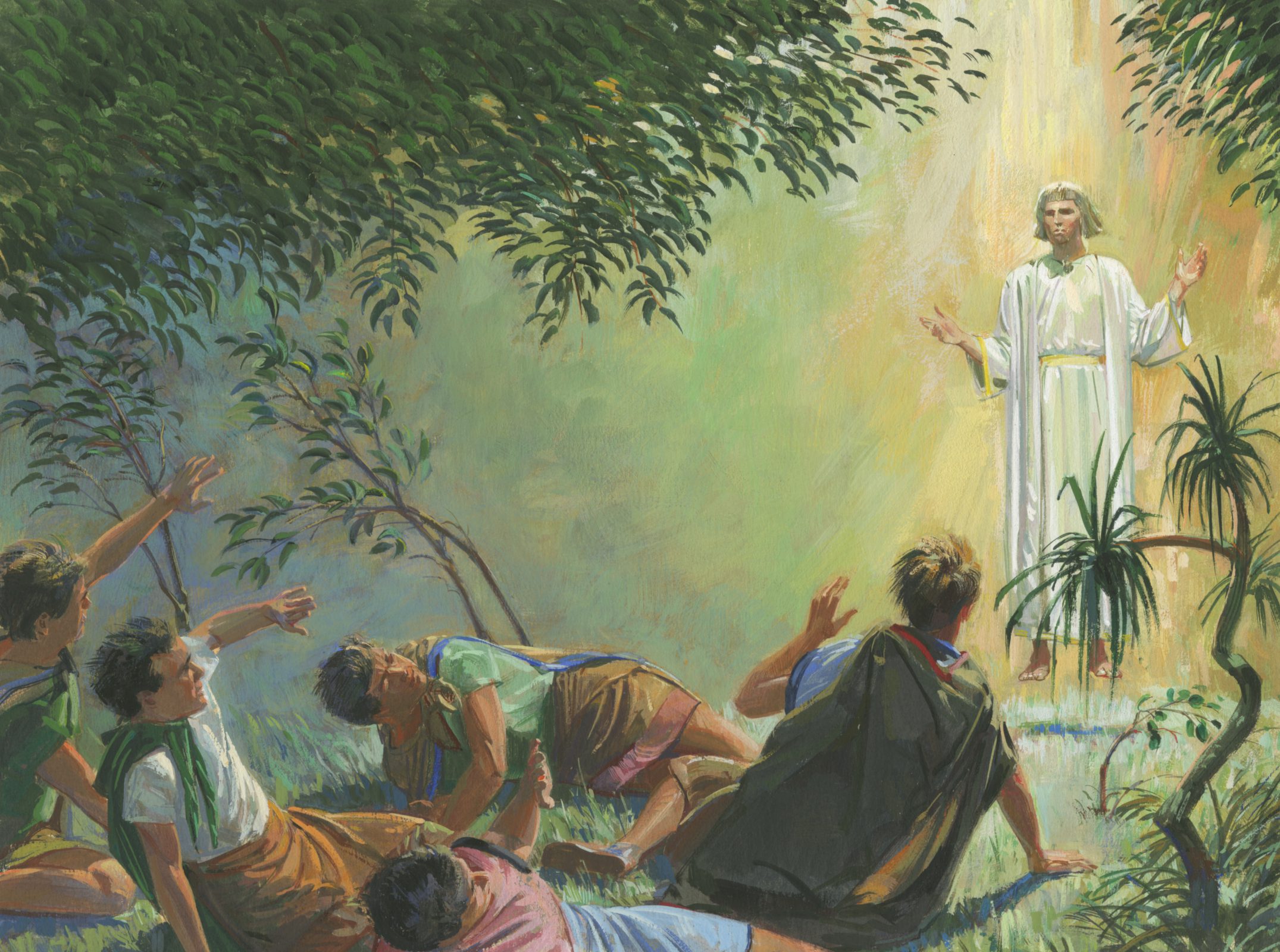 Come, Follow Me for Sunday School: “They Were Called the People of God”, Mosiah 25-28

Where the River Jordan meets the Dead Sea is a place today called al-Maghtas (“baptism”), thought to be the Biblical Bethabara, where John baptized Jesus. At 1,400 feet (about 430 meters) below sea level, it is the lowest place on the planet. When he was baptized, Jesus literally went below all things. You can’t go lower than that anywhere on earth.

Most of us know what it means to feel low. Mostly we feel low about ourselves. Deep down we know what we are, and if we are humble, we know just how big the gap is between what we are and what we should be. This is very private information. The only ones who know the infinite measure of that gap are ourselves and the Savior.

He knows what it means to be lower than the low, to feel like the abyss between ourselves and God is impassable. The Savior’s baptism in the deepest physical depression on earth was merely a token of what was to come in Gethsemane. There He looked into the void that causes us such suffering when we contemplate how far we have sunk from being the righteous men and women we should be. If we ever reached the bottom of that infinitely black psychic ocean, we would implode. But He did reach it, and the intense spiritual pressure caused him to sweat blood—in our place.

Somehow, His infinite sacrifice releases us, enables us to re-emerge whole in both spirit and body, and to become as He is. We come out of deep, oppressive, oceanic darkness to a world of spiritual air and light. This is called the new birth. We are reborn as “people of God” because we are no longer alienated from God and from ourselves; and like an expectant father who witnesses the birth of his child, He claims us and loves us as His own.

The ordeal of Alma the Younger is symbolic of the ordeal all people of God must undergo. The Greek word we translate as “converted” is epistrepho, which means “to bend and twist and turn.” Conversion requires a certain labor, a “twisting” of the spirit. For some, that twisting and turning can be deeply painful, as it was for Alma.

Alma became “a very wicked and an idolatrous man. And he was a man of many words, and did speak much flattery to the people; therefore he led many of the people to do after the manner of his iniquities” (Mosiah 27:8).  There were others like him, many of the “rising generation that could not understand the words of king Benjamin, being little children at the time he spake unto his people; and they did not believe the tradition of their fathers” (Mosiah 26:1). Among these unbelievers were Benjamin’s grandsons, the four sons of King Mosiah and companions in wickedness of Alma the Younger.

Like the wicked Israelites from whom Lehi fled, “they speak vanity every one with his neighbour: with flattering lips and with a double heart do they speak” (Psalm 12:2). A person with a “double heart” has one heart to speak flattering words and another heart that conceals his real purposes. “Flattery” is praising people for qualities they don’t really have in order to get on their good side and manipulate them.

But the Psalmist warns, “The Lord shall cut off all flattering lips, and the tongue that speaketh proud things” (Psalms 12:3). So while Alma “was going about to destroy the church of God . . . behold, the angel of the Lord appeared unto them; and he descended as it were in a cloud; and he spake as it were with a voice of thunder, which caused the earth to shake”(Mos. 27:10-11).  The angel cut short the destructive career of Alma and his friends, and Alma fell into his own “three days of darkness.”

The three-day darkness symbolizes the ordeal of rebirth. The mortal body of Jesus lay in the tomb for three days before He took it up again and emerged, resurrected and reborn in a newly celestial body. For the people of Nephi, the three days of darkness at the crucifixion of the Savior symbolized the pains of hell and the hopelessness of death.

The three-day darkness also represents the bondage of sin. The angel told Alma: “Go, and remember the captivity of thy fathers . . . for they were in bondage, and [God] has delivered them” (Mosiah 27:16). In later years, Alma often referred to the slavery of the Israelites in Egypt and of the people of King Noah to the Lamanites as emblematic of the prison in which we put ourselves when we depart from God. “I also remember the captivity of my fathers; for I surely do know that the Lord did deliver them out of bondage. . . . Yea, I have always remembered the captivity of my fathers; and that same God who delivered them out of the hands of the Egyptians did deliver them out of bondage” (Alma 29:11–12).

To be born again is to be delivered from slavery. Racked with the pains of hell during his three days of darkness, Alma caught hold on his father’s teaching about the Savior: “I cried within my heart: O Jesus, thou Son of God, have mercy on me, who am in the gall of bitterness, and am encircled about by the everlasting chains of death. And now, behold, when I thought this, I could remember my pains no more; yea, I was harrowed up by the memory of my sins no more” (Alma 36:18–19).

At this moment, Alma was born again, delivered like the slaves of Exodus into a new, free life. In his later preaching, “Alma repeatedly mentioned the fate of the wicked in terrifying language and imagery that he similarly used to describe his own horror at facing God at the Final Judgment. In addition, almost as a counterbalance, he also regularly noted the unspeakable joy and light that believers would experience if they would accept Jesus’ redemption” (S. Kent Brown, “Alma’s Conversion: Reminiscences in His Sermons,” in A Book of Mormon Treasury, Provo: Religious Studies Center, 2003, p. 261).

For some like Alma, the three-day darkness is a period of wrenching of the heart (he says his soul was “racked,” meaning tormented by the memory of his evil deeds). For others, it is less like trauma and more like transformation. But for all of us, rebirth requires that we undergo the serious introspective experience called repentance. When Alma awoke after the three days, “said he, I have repented of my sins, and have been redeemed of the Lord; behold I am born of the Spirit” (Mos. 27:24).

For the rest of his life, Alma taught the necessity of being born again. While in darkness, he heard the voice of the Lord: “Marvel not that all mankind, yea, men and women, all nations, kindreds, tongues and people, must be born again; yea, born of God, changed from their carnal and fallen state, to a state of righteousness, being redeemed of God, becoming his sons and daughters; and thus they become new creatures; and unless they do this, they can in anowise inherit the kingdom of God” (Mosiah 27:25-26).

Some people, like Alma, seem to be born again all at once. But it doesn’t usually happen that way. Elder D. Todd Christofferson taught: “Being born again, unlike our physical birth, is more a process than an event. And engaging in that process is the central purpose of mortality” (“Born Again,” Ensign, May 2008, 78). President Nelson continues: “Repentance is not an event; it is a process. It is the key to happiness and peace of mind. When coupled with faith, repentance opens our access to the power of the Atonement of Jesus Christ” (“We Can Do Better and Be Better,” General Conference, April 2019).

Repentance, or the “new birth,” can happen every day. The key is to keep repenting—to strive to be better each day, and when we lapse, to seek forgiveness and rely on the Atonement of Christ to redeem us. Another key is to have faith in the “long-suffering” of Christ, to know that He is willing to work with us as long as we are willing to remember Him and work with Him. As Alma said of himself and his friends, “If it had not been for his matchless power, and his mercy, and his long-suffering towards us, we should unavoidably have been cut off from the face of the earth long before this period of time, and perhaps been consigned to a state of endless misery and woe” (Alma 9:11). Jesus Christ knows how low we can go. He has been there with us. As with Alma the Younger, He has looked into the abyss of darkness in each soul and knows how to bring marvelous light, how to “close the gap” between what we are and we can become. All we need to do is try each day to stay on the covenant path and trust Him to get us home.