Come, Follow Me for Sunday School: “The Virtue of the Word of God”, Alma 30-31 | Meridian Magazine 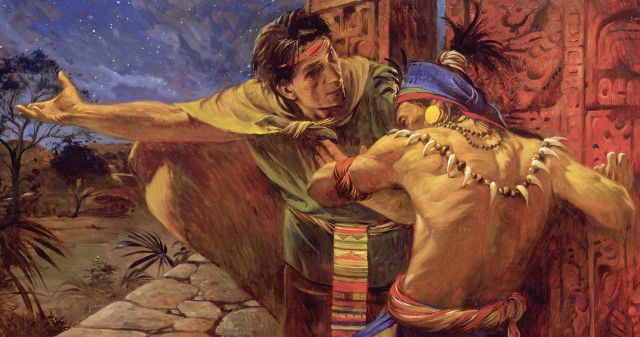 Cover image: All Things Denote There Is a God (Alma and Korihor), by Walter Rane.

At the end of my very first week at Oxford, we had what they call the “Freshers’ Fair.” Throughout the entire day you could wander through room after room filled with tables of people looking for new members to every kind of club you could think of. There were clubs for chess, boxing, croquet, history, Latin, medieval tennis (yes, you read that right) and even an entire club for C.S. Lewis himself!

To make navigating all these options a little easier for the already overwhelmed freshmen, the clubs were organized by room: the sport room, the academic room and even an entire room for religion. As I was a new student that year, I was asked to stand at the club for The Church of Jesus Christ of Latter-day Saints in the religion room, right between the Muslims and the Russian Orthodox Christians (talk about a party).

It was, if I’m honest, a bit of a boring day. Our room was (perhaps intentionally) last of all and right next to the exit, so most of the students just passed us by. But many came to see at least the very first booth in our room, which is what this story is about.

It had been set up by the Evangelicals. Behind their table hung an enormous sign that read, “Do you believe in God?” in bright blue letters on an even brighter yellow background. On the table lay five oversized glass mason jars and a massive yellow plastic bucket filled with marbles.

People were invited to take a marble and place it in one of the five jars based on their answer to the question on the banner. From left to right, the jars were labeled, “Definitely not, probably not, no idea, probably yes and definitely yes.” All day long as I stood across the room I heard the plink, plink of little marbles as they fell into the glass jars that awaited them. But it wasn’t until the day was done that they taught the lesson for which I can only assumed they’d been intended.

Unlike the meager deposits of marbles in the others, two of the jars were filled almost to overflowing. Can you guess which two they were?

“Probably not” and “definitely yes.”

Herein lies a lesson for all of us that echoes one taught in Alma 30. Korihor, an Anti-Christ, attempts to lead the people astray by playing on their uncertainties. His main claims recorded in this chapter all begin with wishy-washy questions about the certainty of others, all the while avoiding making any solid claims of his own. “You don’t know there is a God,” he says, “You can’t know of things to come.” Notice how he doesn’t begin by replacing his denial of these certainties in others with his own certainties, but simply dismantles that which others have spent a lifetime building.

It is only once he has played up these doubts that he begins to make sweeping claims of his own that, in point of fact, make the same claims for which he is complaining against the Saints. It is difficult to say, “You cannot know of anything that is to come,” while in the next breath saying, “Oh, by the way, I know that there will be no Christ.” Wait a second…how can he tell us that we can’t know the future, yet at the same time claim that he knows the future himself? This is precisely what Alma calls him out on.

So, what does this have to do with the jars, you may be asking. Here it is: Those who come to know God through fasting, prayer, love, service, scripture study and meditation have the capacity to know that He is. The scriptures are filled with the promise that God will not forsake us, that if we build on the rock of our Redeemer, who is Christ, that we cannot fall and that we can know as clearly as we discern the daylight from the dark night, that He is our Lord.

Satan makes no such promises. His is the path of uncertainty, dominated by doubt and plagued by a nagging fear that perhaps nothing can be known and that all knowledge, and certainly supposed knowledge of any God, must be little more than what Korihor called the effects of a frenzied mind and a derangement based on the traditions of our parents.

Nowhere is this more clear than in the last verse of Alma 30 which states, after the account of how Satan abandoned his student Korihor, “And thus we see the end of him who perverteth the ways of the Lord; and thus we see that the devil will not support his children at the last day, but doth speedily drag them down to hell.”

So, the jars. The one overflowing with marbles that denied God’s existence was not a jar of absolute certainty, but one of probablys, maybes, kind-ofs and what-ifs. Commitment to such sandy foundations was scarce despite a jar about to burst with marbles to the contrary.

But on the other end of that table was another jar, filled just as full with the marbles of the faithful—not in the jar labeled with probably, wishy-washy, maybe, but one at least comfortable with the possibility of certitude, conviction and the hope of a sure foundation underfoot in past, present and future.

It is not upon the perfect attainment of such certainty that those marbles depended, but upon the hope and striving for such certainty—that is was possible and that its object was real.

May we all take care not to be carried away by every wave of doctrine, tossed about as James describes it, but instead look to the rock from whence we were hewn and stand fast in the faith which has made us free. Whether in the brazen attacks of the Korihors of this world or the subtle mixtures of half-truths and falsehood on any of a thousand Rameumptoms on offer, I know that if we build upon the Rock of our Redeemer who is Christ, the Son of God, it’s not that we probably won’t fall—it’s that we cannot fall.