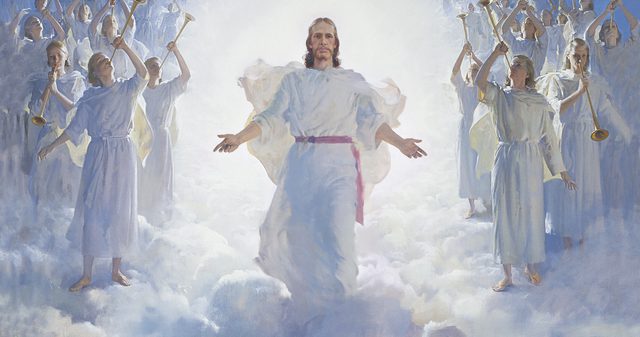 About a century after the resurrection of the Savior, Rabbi Akiva, considered the greatest sage of his generation, declared that the true Messiah had finally come. His name was not Jesus, but Simon Bar Kosiba and he led not a restoration of doctrine but a revolution against Rome. The Bar Kokhba Revolt, however, was an unqualified disaster, and so came and went yet another false Messiah.

Later, in 17th century Turkey, another false Messiah came in the form of Shabbatai Tzvi, a rather enigmatic character who, among other things, claimed he could fly, but only when no one else was looking. In his early forties, Shabbatai was suddenly imprisoned by the Ottoman Sultan, who gave him a choice between death and converting to Islam. By most accounts, he chose to convert, shaking many within the Jewish community to their very cores.

When I lived in Jerusalem, my friends and I would often see a man dressed in a white robe, barefoot and bearded, impersonating the Savior, striving to walk where he walked, but to little avail. Eventually, he disappeared just as mysteriously as he’d shown up in the first place, but not before he’d become something of a legend among both locals and tourists alike.

Whatever the case, whenever the era, it seems the world is almost constantly in search of a Savior. But the hard truth is that, no matter who they choose or imagine, if it isn’t Jesus of Nazareth, it doesn’t ever really work out. The Lord, of course, knew all this would happen, and spoke all about it in the New Testament. So, knowing of the calamity and confusion that would plague our dispensation, the Lord gave (among many others) some good advice that would help us in these trying times.

It is certain that Satan will try to deceive us

It’s kind of like that old joke about the waiting room at the doctor’s office. There’s no chance of not waiting—it’s the name of the room, after all, so they kind of have to make you wait, right? Well, it’s essentially the same thing here: there is no chance that Satan won’t try to deceive, intimidate, discourage or otherwise throw us off in these last days. If there is opposition in all things, and the Lord is hastening His work, it would be a little weird if Satan didn’t up his game as well, right?

“Take heed,” says the Lord, “that no man deceive you.”[1] How will he deceive us? Or, at least, how can he? The Lord lays that out, too.[2] There will be false Messiahs, persecutions, tricks to make us think we’ve been offended, betrayal, hatred, false prophets, iniquity and even love waxing cold. But the promise comes just as clearly as always: “But he that remaineth steadfast and is not overcome,” He assures us, “the same shall be saved.”

Speaking at a BYU devotional about this overwhelming array of deception, James E. Faust once said, “…you will be barraged by multitudes of voices telling you how to live, how to gratify your passions, how to have it all…There will be all sorts of software, interactive computer modems, databases, and bulletin boards; there will be desktop publishing, satellite receivers, and communications networks that will suffocate you with information…There will be fewer places of refuge and serenity. You will be bombarded with evil and wickedness like no other generation.”[3]

If we are to resist the deception that the Lord has said will certainly come into the world, we must turn to Him as His disciples of old. The only thing is that, at least in some ways, it might have been easier for them to have “ears to hear and eyes to see” without so many distractions. In a multitude of voices, the Still, Small One can seem at times like a needle in a haystack. Sometimes, we need to throw out some of the hay so that the needle becomes more obvious. Only then will the next step in the Lor’d srecipe for success really take root.

There is a simple, key ingredient to avoiding that deception

Christ gave us the answer in Joseph Smith Matthew 1:37 when He made a promise. “And whoso treasureth up my word,” He said, “shall not be deceived.” “Wait a second,” I can almost hear you saying to the screen as you read this. “I’ve heard this before. You’re saying all we have to do to avoid deception is to read our scriptures, right?”

Maybe not so much. The Savior makes no promises that if we read a few scriptures a day that we will avoid deception from the world and Satan and all the rest. No, He’s talking about something deeper—something that, unfortunately, looks different for each of us and so is tricky to write down. “Treasuring up the word” isn’t just about reading (though that’s a fantastic start). Instead, it’s about who we are and where our hearts are, as well. In Matthew 6:21, the Savior says, “For where your treasure is, there will your heart be also.” So, if we want to treasure up the word of the Lord, our hearts must be in it.

When our hearts are troubled, where do we go? Netflix? Shopping? Food? There are countless ways in which we can soothe ourselves today and nearly all of them are no more than a click away. But if we are to have the kind of peace that lasts—the kind the world cannot give, but the Savior can—we must accustom our hearts, whether joyful, numb or full of sorrow, to seek first the words of the Lord for comfort, rather than some other more immediate, though lesser balm. So, let us seek him. When our hearts are troubled, when we are afraid, let us shake off the chains that hold us captive to temporal numbness and raise our eyes to heaven and feast for eternity. After all, it’s probably all you can eat.

Your article Isaac hit the nail on the head for me, especially the last section. I've been pondering lately what it means to feast upon the word of God and though I read the scriptures daily, I can't say that I feast upon them. But an analysis of where my heart is makes perfect sense. Thank you for your insightful words.

Thank you so much for this article, specially the last part about treasuring us the worst of the Lord, those words comforted and inspired me.