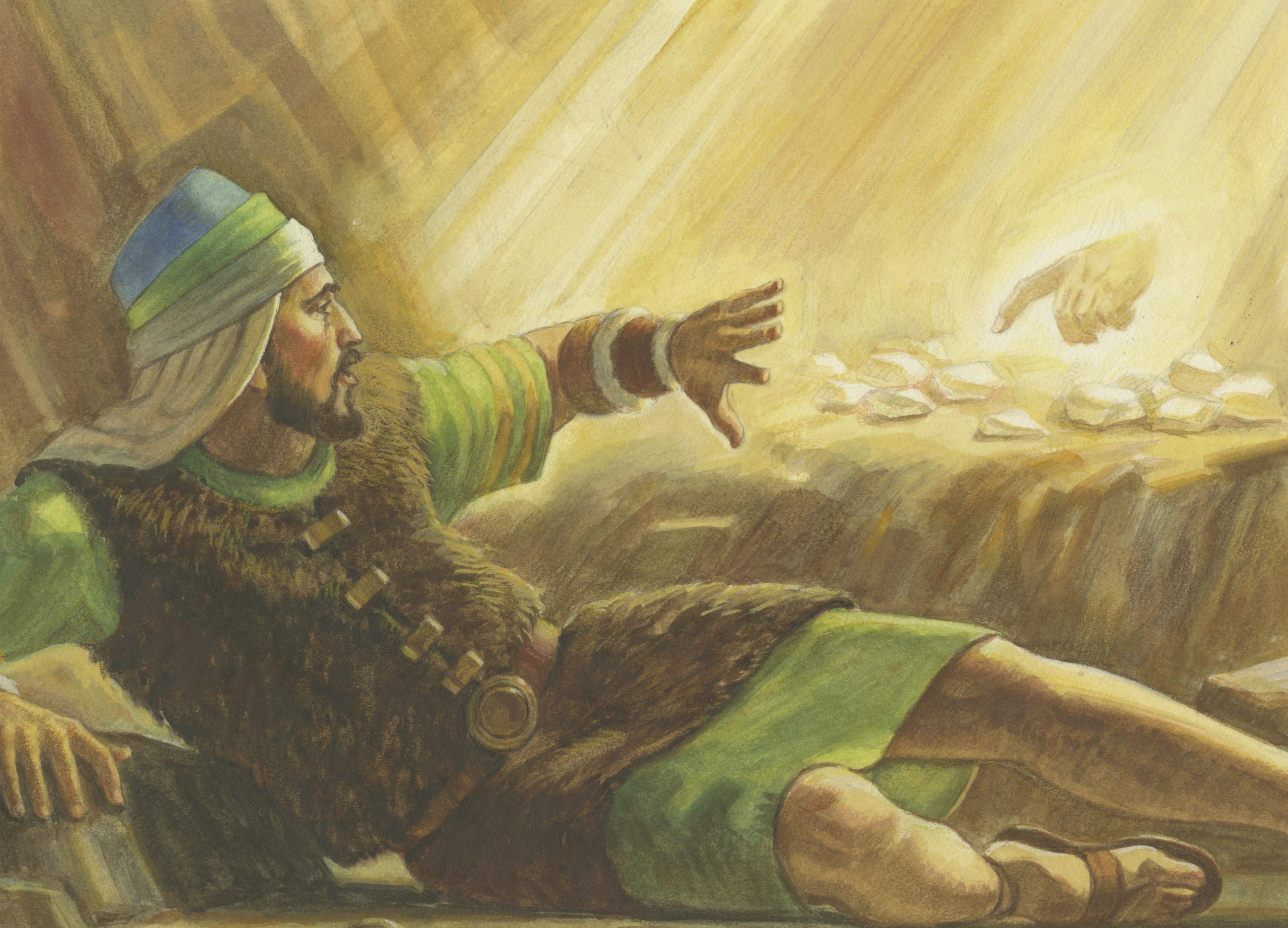 Come, Follow Me for Sunday School: “Rend That Veil of Unbelief”, Ether 1-5

A “veil of unbelief” separates us from our Savior Jesus Christ. We learn from the first five chapters of Ether how to “rend that veil of unbelief” and enjoy the presence of the Lord in our lives now and forever.

The family of Jared and his brother lived in a time of turmoil. It was a wicked world where confusion reigned. False priests and self-aggrandizing tyrants conspired to “reach heaven” by building a counterfeit temple at Babel. As in our time, it was a period of scattering rather than uniting, of polarization rather than oneness, of enmity instead of love. Their language was confounded (we would say “confused”) so they could not communicate with each other (Gen. 11:1-9; Ether 1:33).

We too live in a world where people will not understand each other. We argue over basic facts. Family members get angry, lose the ability to talk to each other, and even break off cherished relationships. We harden against those who don’t see things as we do: our side is all good and the other side is all evil. “A funny thing happens,” says NYU Professor Jonathan Haidt, “when you fill [people’s] minds full of binary dimensions. You turn on their ancient tribal circuits, preparing them for battle” (“The Age of Outrage,” City Journal, Dec. 17, 2017). It sometimes seems like everything is coming apart.

What do you do when your family faces an environment like that?

The answer is to do as the brother of Jared did: to “cry unto the Lord.” He prayed that his family and friends might continue to understand one another. “And the Lord had compassion upon their friends and their families, and they were not confounded” (Ether 1:37). Compassion—empathy, concern, kindness—this is how the Lord responds when we “cry unto” Him. We think of crying as weeping, and “to cry unto the Lord” is to plead with Him. In Hebrew, tsaaq means to “cry out,” as when the blood of Abel “cried out” to the Lord after his brother killed him, or when the Egyptians “cried out” to Pharaoh for bread during famine.

The brother of Jared cried unto the Lord again, wanting to know “whither we shall go.” Surrounded as they were by the chaos and uproar of a collapsing society, the Jaredites longed for a place of safety, a “choice land” where they could find peace. Again, the Lord had compassion on them and proposed to lead them to a land of promise “which is choice above all the lands of the earth” (1:38-42). Likewise, when we face important choices about “whither to go” in our lives, we also have the privilege of crying unto the Lord for guidance.

The land of promise was a symbol of eternal life in God’s presence. That’s why He called it “choice.” The land itself was and is much like any other land; but the Lord chose it as a place of “inheritance” where the Lord could teach his people about their eternal inheritance in His kingdom.

In the same way, the Lord invites us to make our homes and our surroundings into “promised lands” where He can fulfill His promises to us. We decide whether our homes will be places of peace where God “prevails,” as President Russell M. Nelson has counseled (see “Let God Prevail,” October 2020 General Conference) or places like Babel where confusion and contention reign. A promised land can become a cursed land, as it eventually did for the Jaredites and the Nephites when they chose not to let God prevail in their homes.

Therefore, we “rend” the veil of unbelief when we “cry unto God.” As we do so, He always answers with compassion. We feel His spirit and presence. He blesses us with what we need and fulfills our deepest desires (which are not necessarily the more superficial desires of the moment).

Elder Richard G. Scott described how to “cry unto God.” We do as the brother of Jared did—we study out our problem (such as how to light the Jaredite barges) and then go to the Lord with our thoughts:

“When we explain a problem and a proposed solution, sometimes He answers yes, sometimes no. Often He withholds an answer, not for lack of concern, but because He loves us﻿—perfectly. He wants us to apply truths He has given us. For us to grow, we need to trust our ability to make correct decisions. We need to do what we feel is right. In time, He will answer. He will not fail us. . . . He wants us to act to gain needed experience:

“When He answers yes, it is to give us confidence.

“When He answers no, it is to prevent error.

“When He withholds an answer, it is to have us grow through faith in Him, obedience to His commandments, and a willingness to act on truth. We are expected to assume accountability by acting on a decision that is consistent with His teachings without prior confirmation. We are not to sit passively waiting or to murmur because the Lord has not spoken. We are to act” (“Learning to Recognize Answers to Prayer,” Ensign, Nov. 1989, 31–32).

Sometimes the Lord shows compassion by “chastening” us. When the brother of Jared became lax in his faith and “remembered not to call upon the name of the Lord,” for three hours “did the Lord talk with the brother Jared, and chastened him” (2:14). To be chastened is to be corrected or re-directed to the covenant path. The Psalmist wrote, “Blessed is the man whom thou chastenest” (Psalm 94:12). In any case, the Lord answers our cries with compassionate and corrective responses that enable our exaltation in the fulness of time.

In our lives, as with the Jaredites, the Lord calls us to make our way along the covenant path to the “promised land” of exaltation in His kingdom. The Lord has led His people on many such journeys in sacred history. Examples include the exodus of Israel from Egypt, the trek of the Latter-day Saints to the valleys of western America, and the journeys of the Jaredites and Lehites.

The travels of the Lord’s people often taken on symbolic significance. For example, the exodus had forty-two stages—a number that translates into three-and-a-half time periods, or the “time, times, and half a time” of the tribulation spoken of by John the Revelator (Rev. 11:2-3; 12:14). The Jaredites crossed the sea in 344 days, a number that would be very meaningful to a Jew: it is “seven times seven times seven plus one.” The number 343, the cube of seven, signifies perfection or completion; the extra day is the day of rejoicing. Upon arrival, the Jaredites “bowed themselves down upon the face of the land, and did humble themselves before the Lord, and did shed tears of joy before the Lord” (6:11-12).

These passages symbolize our mortal lives as the Lord leads us from Fall to Redemption. Our journey is fraught with temptation and tribulation because its purpose is to “prove us herewith,” to qualify us for a celestial inheritance. Although the journey is rigorous, consider the tender celebration that will come at the end if we keep our covenants and stay on the path, trusting him to make “the winds to blow unceasingly toward the promised land” (6:8).

By the seashore, at the place Moriancumer, the Lord called the Jaredites to cross the sea to their promised land. They were instructed in how to prepare for the voyage by building barges. When the brother of Jared realized that there would be no light in the barges, he approached the Lord with the problem: “O Lord, thou hast said that we must be encompassed about by the floods.”

We are in the same position: Every day we are encompassed by “floods”: problems with physical or mental health, finances, family, church callings. “The mountain waves” of life break over us, and “great and terrible tempests” both spiritual and temporal buffet us “by the fierceness of the wind” (3:2; 6:6).

These challenges are essential to our mortal probation (“we must be encompassed by floods”). We cannot get from here (mortal life) to there (eternal life) without going through what Shakespeare called “a sea of troubles.” But if we have faith in the Lord, we need not find our way in the dark. The brother of Jared obtained “sixteen small stones,” asked the Lord to touch them with His finger, “and behold, they did give light unto the vessels. And thus the Lord caused stones to shine in darkness, to give light unto men, women and children, that they might not cross the great waters in darkness” (3:4; 6:2-3).

The interior of Noah’s ark was lit in a similar way. According to Jewish legend, the Lord gave Noah the plan for the ark “with a finger” and then illuminated the ark with a shining stone: “One pearl was suspended in the ark, and shed light upon all the creatures in the ark, like a lamp which gives light inside the house, and like the sun yonder which shines in his might” (Pirkei de Rabbi Eliezer, chapter 23). The Lord does not expect His people to go through the deep waters of mortality without His guiding light.

Likewise, if we continue to cry unto the Lord for light, He will provide it. We need not live our lives in darkness and despair if we are willing to turn to Him for revelation to light our way.

What is the reward of gaining the “promised land”?

A knowledge of “the great and marvelous things which have been hid up from the foundation of the world”: In other words, the fullness of the blessings of exaltation. On top of Mount Shelem, the Lord took the brother of Jared inside the veil and endowed him with a complete understanding of the plan of salvation.

This kind of vision is called an “apocalypse,” when the veil is opened and the Lord lays out His entire plan and purpose. “He showed unto the brother of Jared all the inhabitants of the earth which had been, and also all that would be; and withheld them not from his sight, even unto the ends of the earth” (3:25).

We can receive this same knowledge and these blessings in the temple. “Come unto me, O ye house of Israel,” the Lord promises, “and it shall be made manifest unto you how great things the Father hath laid up for you” (4:14). These “greater things” are hidden if we do not come unto Him: “It hath not come unto you, because of unbelief. Behold, when ye shall rend that veil of unbelief which doth cause you to remain in your awful state of wickedness and hardness of heart, and blindness of mind,” then “shall ye know that the Father hath remembered the covenant which he made unto your fathers” (4:15).

The rewards of keeping that covenant are truly indescribable. “Eye hath not seen, nor ear heard, neither have entered into the heart of man,” wrote the Apostle Paul, “the things which God hath prepared for them that love him” (1 Cor. 2:9). But until we “call upon the father in my name, with a broken heart and a contrite spirit,” we will not obtain those things and the veil is closed to us (Ether 4:15).

Another thoughtful lesson, Breck. I believe that one of the most important steps mortal man can make in order to gain salvation and earn exaltation is to establish a relationship with God through prayer and your lesson brings that importance into sharp focus. Thanks for your lesson my friend.