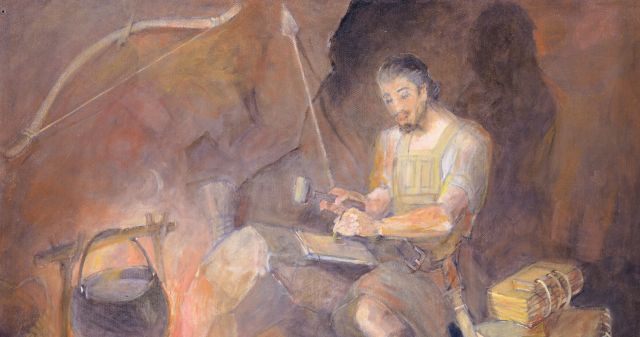 Come, Follow Me for Sunday School: “May Christ Lift Thee Up”, Moroni 7-9

A pandemic of hatred has infected the world we live in. It is spiritually as dangerous as the physical pandemic we are struggling with. We are rapidly dividing into two worlds, each convinced that our side is righteous and the other side irredeemably evil. Ominously, the Book of Moroni shows us what happens when tribal anger and hatred begin to rule the hearts of the people. By contrast, it also shows us what happens when charity, the “pure love of Christ,” reigns in the heart.

As you study these chapters, consider the stark divergence between the love of Christ and the hatefulness of Satan. Consider the consequences of choosing one over the other. Also, consider where we stand today, at this critical moment, in our families, our communities, and our nations and what will surely be the outcome if the pandemic of hatred continues to rage.

“It appears there is nothing that unites our people except their love of the quarrel itself,” author Salman Rushdie recently observed. Something akin to what happened to the Nephites in the third century has infected us: the stirring of the heart to hatred. Recall that after generations of peace, “there began to be among them those who were lifted up in pride, such as the wearing of costly apparel, and all manner of fine pearls, and of the fine things of the world. And from that time forth they did have their goods and their substance no more common among them. And they began to be divided into classes” [4 Nephi 1:24-26].

What grows from such seeds of pride and selfishness?

Mormon tells a sad story of dwindling faith and open rebellion against the gospel of Christ. There came a time when “both the people of Nephi and the Lamanites had become exceedingly wicked one like unto another” [4 Ne. 1:45]. Obviously, each party thought of themselves as the “good guys,” but from Mormon’s perspective there were no longer any good guys—just bad guys who were deluding themselves. The polarization of society was complete.

“Such a cleanly polarized world gives us supremely simple solutions and supremely confident leaders . . . who reduce all troubles to one cause and all problems to just one enemy,” says Latter-day Saint scholar Hugh Nibley [The Prophetic Book of Mormon, Deseret Book, 1989, 454]. This is where we are now. We have leaders who characterize those who disagree with them as enemies to be suppressed. Where we used to be able to agree at least on the facts, we can no longer do even that: each side has its own “alternative facts” that don’t conform to objective reality.

We have always faced a choice between “two ways”: good and evil. But today, as Brother Nibley points out, we have replaced the “two ways” with “two parties,” the doctrine that “righteousness consists in belonging to one party (ours), and wickedness in belonging to the other (theirs)” [Nibley, 462]. Because of our tribal pride and contentiousness, our civilization is now well down the road toward Moroni chapter 9.

In that chapter, Mormon recounts the atrocities he has witnessed among his people. “Satan stirreth them up continually to anger one with another. . . they have lost their love, one towards another; and they thirst after blood and revenge continually” [Mor. 9:3, 5]. The operative word is “continually”—without ceasing, without pause, they are in a constant state of anger. Their only purpose is to beat the other side, to get revenge on the “enemy.” Shattered by the evil behavior of his own people, Mormon tells tales of rape, torture, murder, and cannibalism carried out by Nephites upon Lamanite women [9:9-10].

Mormon laments that his people “are without civilization—and only a few years have passed away, and they were a civil and delightsome people”[9:11-12]. Not long before, their grandparents had received the sacrament—the tokens of the covenant of the Atonement—from  the hands of the Savior Himself [3 Ne. 20:3-10]. Now they were mocking that sacred covenant by consuming the flesh of their enemies, “and they do it for a token of bravery” [Moro. 9:10].

How could such a blessed people become so degenerate so rapidly? We think of ourselves as “civilized,” but are we headed down the same road the Nephites and Lamanites took?

President Russell M. Nelson warns that we are living amid a plague of “hate, civil unrest, racism, violence, dishonesty and lack of civility” [“The Healing Power of Gratitude,” Nov. 20, 2020, lds.org]. Obviously, racism played an important role in the wars between Nephites and Lamanites. Today, our prophet pleads with us not only to avoid the cruel path described in Moroni 9, but to be leaders in promoting respect for others, especially for those who have historically been downtrodden: “I grieve that our Black brothers and sisters the world over are enduring the pains of racism and prejudice. Today I call upon our members everywhere to lead out in abandoning attitudes and actions of prejudice” [“Let God Prevail,” General Conference, Oct. 4, 2020].

How do we “lead out” in this area, as our prophet has asked?

First, we must abandon our impulse to anger. We must not respond to others in a spirit of contention. One of the first commandments the Savior gave to the Nephites was “there shall be no disputations among you, as there have hitherto been. . . . The spirit of contention is not of me, but is of the devil, who is the father of contention, and he stirreth up the hearts of men to contend with anger, one with another. . . . This is my doctrine, that such things should be done away” [3 Ne. 11:22, 28-30].

How do we overcome the impulse to contention?

The remedy for this impulse is found in Moroni chapter 7. “Charity is the pure love of Christ, and it endureth forever; and whoso is found possessed of it at the last day, it shall be well with him” [7:47]. How do we become charitable? “Pray unto the Father with all the energy of heart, that ye may be filled with his love” [7:48].

Charity is the antidote to the spirit of anger and contention that destroyed both great civilizations of the Book of Mormon—the Lehites and the Jaredites. The English word “charity” is related to the Latin carus (beloved) and the Greek kharis (loving kindness). Kharis is also translated as “grace.” Charity is the ultimate attribute of Christ, as Mormon points out—to be filled with the pure of love of Christ makes us “like him” [Moro. 7:48]. In the ultimate act of charity, Christ died for us so that we can be resurrected and exalted.

President Dallin H. Oaks observed: “The reason charity never fails and the reason charity is greater than even the most significant acts of goodness . . . is that charity, ‘the pure love of Christ’ is not an act but a condition or state of being. . . . Charity is something one becomes” [“The Challenge to Become,” Ensign, Nov. 2000, 34]. The essence of Jesus Christ is charity. As the great Russian writer Chekhov once said, “Love shows a person who he should be.”

We should ask ourselves to what extent we are intolerant of or even angry with people who differ from us.  Do we say cruel things to or about others—or worse, do we tell lies about them? Are we proud or envious? What selfish schemes occupy our minds and hearts? Do we fly to pieces in anger over disagreements? If we indulge in any of these evil practices at home, on the Internet, or at work, no matter how “righteous” we may seem on the outside, we are “Gadiantons” on the inside. We urgently need to repent.

On the other hand, we should ask ourselves to what extent we are willing to “suffer long” the mistakes and flaws of others, fully aware that we ourselves are flawed. Do we respond with kindness? Are we “meek and lowly of heart—for none is acceptable before God save the meek and lowly in heart”? [Moro. 7:13-14]? Are we preoccupied with what we can do to serve others? Are we “not easily provoked”? Do we diligently seek and rejoice in truth?

But what do we do if we genuinely disagree with someone? How do we respond charitably to points of view we consider to be wrong?

Too many of us “cancel” or “un-friend” people just because they disagree with us. Most disagreements are not worth fighting over, so don’t do it. That’s what it means to be “not easily provoked.” A charitable person is first a listener. Try your best to understand people who differ from you: You might learn something. Everyone has experiences, ideas, and “slices of truth” you don’t have, so hear them out. If you wish, explain your own views kindly and civilly or not at all. Always remember that you don’t have a monopoly on truth—no one does. Together with those who disagree with you, you can grasp greater truths. Charitable people “rejoice in truth”—not in “being right.”

To the extent that we allow ourselves to be captives of “party thinking,” of tribal pride and contentiousness, we give up our agency to think for ourselves. The Nephites and Lamanites were spiritual prisoners to party thinking. Caught up in the “superiority” of their race, their “cause,” their black-and-white mindset, they were obsessed with revenge, the exact opposite of charity.

However, to the extent that we choose charity, we rise above party thinking and liberate ourselves from the weight of prejudice and hatred. Mormon told his son, “May not the things which I have written grieve thee, to weigh thee down unto death; but may Christ lift thee up.” The answer for those who are oppressed by a troubled, wicked world is to focus on Jesus. “May his sufferings and death, and the showing his body unto our fathers, and his mercy and long-suffering, and the hope of his glory and of eternal life, rest in your mind forever” [Moro. 9:25].

In other words, we find peace when we rest our minds on the promise of forgiveness, resurrection, and life with Him here and in the eternities.

To respond to the call of our prophet to “lead out in abandoning attitudes and actions of prejudice,” it’s time for us to repent, to exemplify the pure love of Christ in all we do, and to “pray unto the Father with all the energy of heart that [we] might be filled with this love.” We lead out by asking the Lord to make us more charitable.

Let’s offer the prayer of our prophet:

“We pray for relief from political strife. Wilt Thou bless us with a healing spirit that unites us despite our differences. Wilt Thou also help us repent from selfishness, unkindness, pride and prejudice of any kind.”

A timely and stirring lesson, Breck. As you advised, despite the political morass we find ourselves confronted with these days, we can never go wrong by involving charity as we deal with the issues (or anything in life for that matter).

Breck, Thank you for this great article . You’ve lifted my spirit today as I have pondered your words and those of the Prophet and Book of Mormon. I engage in political discussion with my grandson. He exemplifies this teaching. No matter how much we disagree no voice is raised in anger, no heart hurt and all ends in love and appreciation for each other. I’ve shared your article with him and other members of my family. Thanks again for sharing your knowledge and spirit.