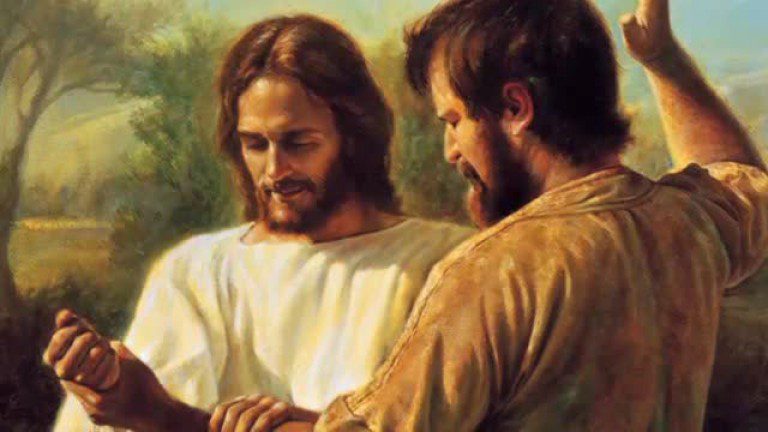 When I was in high school, I had a piano teacher named Mr. Froom. Whether among students or family, his jokes almost always fell flat, but that never stopped him laughing at them as heartily as if he’d brought down the house at a theater. About as tall as he was wide, what he lacked in athleticism he more than made up for in his passion for the music he played nearly every waking hour of his life. Between his work as a symphony cellist and the piano lessons he taught in the evenings, Mr. Froom knew more about music than just about anyone I’ve ever known. But after taking lessons with him for some time, there came one evening when he surprised me.

“Play that passage again,” he said, sitting back with his eyes closed, ready to listen a second time to the piece I’d been working on for months. When I’d finished, he frowned slightly. “One more time,” he said, opening his eyes and bending to look more closely at the music on the stand. After this last attempt, he shook his hands enthusiastically in my direction and, taking my cue as I’d done a hundred times before, I scooted to the far end of the bench to make room for him to sit and play the passage as it should be. But this time, as I sat to listen, his fingers fumbled half way through, and we both fell silent. He tried again, explaining what it should sound like all the while, but still couldn’t get his fingers to do what he wanted them to. I’d encountered the very same problem myself, of course, and it had taken me the better part of a month to finally get my hands to agree with the notes on the page. Then, after a third attempt, he stopped his explanation, put his hands down on the bench, and turned to look me straight in the face, smiling.

“Well,” he said, rather sheepishly, but still chuckling, “I guess it’s more of a ‘do what I say, not what I do’ sort of thing at this point, eh?”

I hoped I understood what he meant. If he had to spend time learning every song that each one of his students was learning, there would be no time for anything else, let alone thinking up his cheesy dad jokes. But from that point on, things changed a bit. I came to miss the times when he could show me rather than just tell me what to do. For whatever reason, it had seemed easier to understand that way—to follow the actions of one who knew by doing, rather than just the words of one who knew by preaching.

“How could the Father show the world,” the Primary song asks, “the pathway we should go? He sent his Son to walk with men on earth, that we may know.”1 In other words, God the Father sent His Son, the Great Jehovah, to earth not just to tell us the way, but to show us the way by going through mortality Himself. Our Heavenly King is not one who sits on a throne safe within his castle as his armies fight his battles for him. No, Jesus of Nazareth stands shoulder to shoulder with us at the front lines of life’s everyday battles, never forsaking us so long as we never forsake Him, either.

While the New Testament gives us several accounts of the Lord’s baptism at the hands of John the Baptist, it does not spend a great deal of time on the reason for that baptism. 2 Nephi 31, however, dedicates an entire chapter to explaining why Christ was baptized. Rather succinctly, Nephi writes the Savior was baptized because “it showeth unto the children of men the straitness of the path, and the narrowness of the gate, by which they should enter, he having set the example before them.”2

Simply put, Jesus was baptized to show us that we need to be baptized, too. Here was no Mr. Froom telling me to do something that he himself could not or simply would not do. Jesus came and showed us, from the baptism at the beginning of His mortal ministry to the forgiveness He gave on the cross at its ending, the pathway we should walk by walking it, step by often agonizing step, himself, alone. By virtue of His moral life, as well as the Atonement which he wrought at its end, he was able to know how to succor us—not because of some ivory tower, far-away spiritual knowledge of mortality, but a perfect knowledge, as Alma puts it, “according to the flesh.”3

This is central to the Savior’s way of teaching. He doesn’t just explain things to us. He shows us the way by doing it Himself first. It reminds me of the time my brother, frustrated that I couldn’t play with him in the deep end of our grandma’s pool, finally decided he would teach me to jump off the diving board. Still a little on the young side, I was terrified to jump, though I would have never admitted that out loud to my brother. So, perhaps even without knowing he was in some small way emulating the Savior, he leaned over to me as we both stood dripping outside the pool and said, “It’s okay. Watch, I’ll go first and show you it’s alright.” Then, without warning, he stepped up to the diving board and jumped into the pool with a splash.

My little heart sank as he called out for me to jump in after him. I still didn’t really want to go, but I had seen that my older brother was willing to do it, and it meant the world to me that he had shown me that by doing it himself. It couldn’t be that bad if he did it, I thought to myself. So, still shaking a bit, I climbed onto the diving board and jumped, holding my nose. When I finally came up out of the water, sputtering and splashing around, I opened my eyes to see my big brother, treading water right beside me, beaming. He knew I could do it, but I hadn’t—not, at least, until he’d taken the plunge into the deep to show me by his own actions and choices how it was to be done.

This is what the Savior did for us when He came to earth to live a mortal life, suffering “temptations, and pain of body, hunger, thirst, and fatigue,”4 not just to save us from our sins, but also to show us how to live. Once he had done so, Christ was able to ask us not only to do what he said, but to follow [Him], and do the things which [we] have seen [Him] do.”5

“Verily, verily, I say unto you,” He continues, “He that believeth on me, the works that I do shall he do also.”6 More than asking us to believe what He believed, write what He wrote, or know what He knew, the Savior of the world asks us to follow in the footsteps of His exemplary life. “I am the vine,” he said, “ye are the branches: He that abideth in me, and I in him, the same bringeth forth much fruit: for without me ye can do nothing.”7 Certainly, without His grace, we could do nothing, for as King Benjamin wrote, it is only by His matchless power that we are sustained moment to moment.8 But more than that, we can do nothing without Him because without His example we wouldn’t know how to do anything.

It was perhaps for this reason that, when Thomas asked Jesus how they would know the way when Jesus left them, the Lord replied not with a formula or a list of rules, but by simply stating, “I am the way.”9 Jesus is the way because of His perfect example. He taught us not just by the words He spoke, but by the deeds He did, the love He shared and the forgiveness He so freely offered. If we are to answer His call to “do all that thou doest in the name of the Son,”10 we must diligently study His life. In coming to know not just what He said, but what He did, we can then know how to be “doers of the word, and not hearers only,”11 and thereby become true disciples of Jesus Christ.

As we study the New Testament this year, Jesus can teach us in every page—not just by the words that His disciples wrote, but by the acts of lovingkindness He performed during His short time on the earth. And then, armed with this knowledge of His character, we can better live as He lived, knowing that, like my big brother who jumped in the pool before me, everything will be alright in the end.