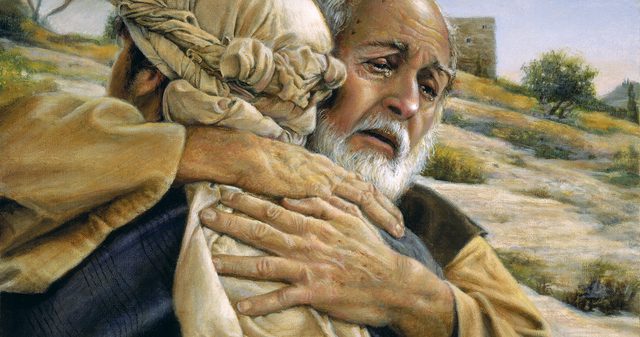 Our Heavenly Father is now gathering His family together for the last time. It is His greatest joy and glory to see His children returning to Him. All parents know what it means to love their children; they also know how it hurts when children turn against them and principles of eternal life and happiness.

No matter where we stand now, our Father is pleading with us to repent—to come back to Him. He is calling, waiting, and hoping. Furthermore, our greatest work in this life is to help with this gathering of the Lord’s family, also known as “the house of Israel.” As President Russell M. Nelson has said, “These surely are the latter days, and the Lord is hastening His work to gather Israel. That gathering is the most important thing taking place on earth today. Nothing else compares in magnitude, nothing else compares in importance, nothing else compares in majesty” (Worldwide Youth Devotional, Salt Lake City, UT, June 3, 2018).

The magnitude of this work is truly breathtaking. It fulfills promises made thousands of years ago.

Anciently, the prophets saw the scattering of Israel as a kind of spiritual death. Like the prodigal son in Luke 15, the northern tribes (collectively called “Ephraim”) chose to revolt against their Heavenly Father, turning their backs on the temple in Jerusalem and immersing themselves in idolatry and materialism. For this, they were forced into exile and spiritual starvation and scattered to the four winds. Then, at the time of Lehi and again after the Savior’s time, the sinful southern tribes (collectively called “Judah”) were also forced into exile and scattered. “This my son was dead,” says the father of the prodigal (Luke 15:24), while the prophet Ezekiel compares dispersed Israel to a valley of the dead filled with dry bones (Ezek. 37:1-2).

But there is hope. The prodigal son will eventually “come to himself.” The dead will rise. A new covenant will bring new life. “Behold, the days come, saith the Lord, that I will make a new covenant with the house of Israel. . . . I will put my law in their inward parts, and write it in their hearts; and will be their God, and they shall be my people” (Jer. 31:31-33).

Just as the father welcomes the repentant prodigal back with open arms, our Heavenly Father welcomes us back in the same way. “When [the prodigal] was yet a great way off, his father saw him, and had compassion.” Our Father has his eye on the whole house of Israel both collectively and individually and watches over us kindly even when we are “a great way off.” When we are ready to embrace Him, He is ready to embrace us: “[The father] ran, and fell on his neck, and kissed him.”

To be gathered back into the family of God, we must, however, be repentant. The prodigal son recognized his situation: “Father, I have sinned against heaven, and in thy sight, and am no more worthy to be called thy son.”  This confession applies to the whole House of Israel as well as to us individually. Then, through the miracle of the Atonement of Jesus Christ, we are rendered worthy by our repentance.

The prodigal’s father then calls for the son to be clad in the “best robe,” a ring, and sandals. The “best robe” is a translation of the Greek protostole, meaning “first” or “principal” robe. In Bible times robing ceremonies were associated with the coronation of the king. The signet ring was a symbol of authority in the household and was used to seal covenants. The shoes symbolized his status as a free man, for only slaves went barefoot.

These highly symbolic actions constitute the father’s “endowment” of his repentant son. His former status in the family is restored and his exalted position as an heir re-confirmed. His father’s tender embrace signifies that he is once again “atoned”—at one with him. These promises of redemption, heirship, and exaltation also apply to us today as individuals and to all of Israel on conditions of repentance. As the father says, “This my son was dead, and is alive again” (Luke 15:18-24).

How can a son who has wandered so far can be restored?

Even if we repent, we certainly cannot reclaim that heirship and exaltation on our own. We can never repay what has been squandered and never make up for all that has been lost. But there is One who can: “There is no flesh that can dwell in the presence of God, save it be through the merits, and mercy, and grace of the Holy Messiah” (2 Ne. 2:8). Through the Atonement of Jesus Christ we can once again find ourselves “encircled about eternally in the arms of his love” (2 Ne. 1:15).

In Bible times, the ancients connected the rising of the dead with the prophesied gathering of Israel. The parable of the prodigal son foreshadows this gathering in our time. Ezekiel saw the scattered dry bones of “the whole house of Israel” come to life again as a vast army, brought together “from among the heathen, whither they be gone. . . . and I will make them one nation. . . . And David [the Savior Jesus Christ] my servant shall be king over them” (Ezek. 37:11, 21, 24).

Why did Jesus wait so long to go to Lazarus? Why didn’t he rush to heal his friend from his sickness?

Of course, Jesus could have healed Lazarus at any time. He knew that Lazarus was dead and says to his disciples, “I am glad for your sakes that I was not there, to the intent ye may believe” (John 11:14-15). The raising of Lazarus was to be a sign.

Clearly, it was a sign of the Lord’s power over physical death. Just as significantly, it was a sign of His power over spiritual death—the restoration of scattered (“dead”) Israel. The people needed to know that Lazarus was indeed physically dead, just as the house of Israel had for so long suffered spiritual death. The people saw Lazarus revived again just as Ezekiel saw the long-dead, dry bones of the house of Israel revived again. It was a sign that the great family of God could be redeemed by the Son of God and become as one with Him.

Even the wicked high priest Caiaphas was compelled to acknowledge that the Atonement of the Messiah would overcome death and bring about the restoration of the family of God. Hearing of the raising of Lazarus, Caiaphas observed, “It is expedient for us, that one man should die for the people, and that the whole nation perish not. . . . and not for that nation only, but that also he should gather together in one the children of God that were scattered abroad” (John 11:50-52). The raising of Lazarus foreshadowed the gathering and restoration of Israel in our day.

So what does any of this mean to us?

It means that God keeps His promises. It means He will resurrect us from the dead both physically and spiritually. He will bring us back to Him no matter how impossible it might seem to us. Israel had been hopelessly scattered, spiritually as dead as the dry bones in Ezekiel’s vision; but regardless of how far we wander, He will reach after us and bring us new spiritual life and exaltation in His household. Like the father of the prodigal son, He will run to us, embrace us, and “kill the fatted calf” for us.

What is our part in all of this?

We must repent and return to our Father each day, as President Nelson has said: “Whether you are diligently moving along the covenant path, have slipped or stepped from the covenant path, or can’t even see the path from where you are now, I plead with you to repent. Experience the strengthening power of daily repentance” (“We Can Do Better,” April 2019 General Conference).

Furthermore, President Nelson invites us to help with the gathering of Israel: “Would you like to help gather Israel during these precious latter days? Would you, who are the elect, be willing to help find the elect who have not heard the message of the restored gospel? If you choose to, if you want to, you can be a big part of it. You can be a big part of something big, something grand, something majestic!” (Worldwide Devotional, op. cit.).

I love how the parables have so many layers and depths of meaning. Thank you once again for all you do to add understanding to the scriptures.