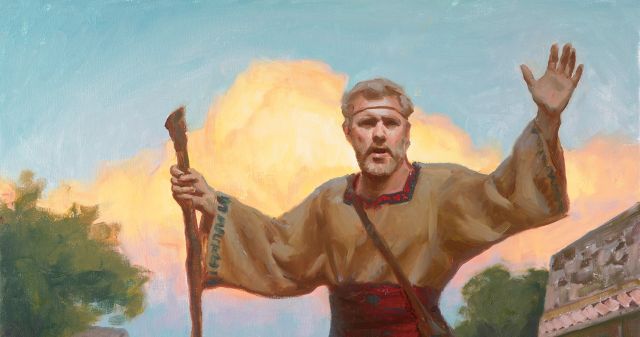 In the beginning of Alma 8, we read how the prophet Alma journeys to several cities and enjoys a warm reception. People hear his sermons. Many are baptized. Some even receive revelations that are so sacred that they cannot be written, so the record tells us.

Yet, after all of these glowing receptions, Alma hits a proverbial brick wall at Ammonihah. It would have been bad enough had nobody listened to him, but that wasn’t even the half of it. They reviled him, spit upon him and generally said some pretty nasty things to him. And so, only after trying his very best for more time than maybe I would have spent among such a hostile audience, he left. And frankly, I don’t blame him.

But this is when the story gets interesting. On the road away from Ammonihah, having been forcibly ejected from the city he’d only tried to help, he felt, says Alma 8:14, “weighed down with sorrow, wading through much tribulation and anguish of soul.” In other words, Alma was sad. He was disappointed. He was having a hard time. (Sidebar lesson here: if you ever find yourself in hard times feeling like Alma did in this situation, please don’t feel alone, because you are not alone. Instead, you find yourself among some of the greatest the world has ever known, including the Lord Himself).

Then, in the midst of all this anguish and suffering of heart, an angel appeared—not just any angel, but the very same angel who had called Alma to repentance all those years before when he had been the one sowing anguish and despair. Then, in a most unexpected way, he tells Alma, in essence, “Be happy! You have such a great reason to be happy right now!”

What was that reason?

No, it was none of these. The angel explains in Alma 8:15: “Blessed art thou, Alma; therefore, lift up thy head and rejoice, for thou hast great cause to rejoice; for thou hast been faithful in keeping the commandments of God from the time which thou receivedst thy first message from him.”

In other words, Alma could be happy because he was obedient to the commandments of the Lord.

This comes back to the last article I wrote about Abinadi and Alma the Elder. The difference between their ministries was not a difference between failure and success based on how many they were able to baptize, whether in the first generation of converts or those that came thereafter. No, as Preach My Gospel tells us, their success was measured by their obedience to the Lord and the feeling that the Lord was working through them in the midst of that obedience.

While that obedience need not be perfect, in order to rejoice as Alma was commended to by the angel in this chapter, we must at least be facing the direction of obedience, trying our best to do our small part in building up the Kingdom of God, one good turn at a time.

If success were measured in the reception we receive at the hands of others, or the judgement they rain upon us, or even the accolades the world hands out to those whom it deems worthy, then Alma would have had little cause to rejoice in this moment at all. But that is not the source of our success. That source, rather, is the still, small feeling of peace that comes from trying our best to follow the Lord, come what may, and repenting along the way when things don’t go exactly according to plan.

Importantly, this consistent trying for exact obedience was not just something that Alma did, it was something he had done for so long, so regularly, that it had become something he was. He didn’t just perform obedience. He was obedient. His actions, in short, had changed his character, and had done so for good.

How do we know this? Well, because, as soon as the angel had finished telling him to go back to Ammonihah, he went speedily back there to do whatever it was the Lord hoped he would accomplish there. The speed of his obedience, the exactness of his willingness to “go and do” as Nephi before him, had come from practice. All we need do is the same: practice a little every day. If we do so, the Lord’s promise through Richard G. Scott will come to pass, that, “We become what we want to be by consistently being what we want to become each day.”

We learn later in verse 26 that he not only obeyed, and that speedily, but did so fasting, for when he arrived at Amulek’s home, he was nearly starving after that fast.

So, I end with a question: what are we doing to work this gradual but permanent change in our characters today? My assertion after reading these verses and others is that it must be the little things, for by these are great things brought to pass, so the scriptures say.

When did Amulek run into Alma? When he was on his way to visit a family member.

When did Lehi receive the commandment to flee to the Promised Land? While he was saying another daily prayer.

When did Samuel receive the call to be a prophet? While serving simply and humbly in the temple.

When did any of the prophets receive the great revelations that became scripture? As they studied and pondered the scriptures that had come before. So, if we would be as Alma, as Amulek, or as any of those who prepared the way before us, we must start today with only the next small act of kindness, the next small act of love. And then, as we choose to do so each day, our characters will grow and the mighty change of heart that changed Alma, Nephi, and so many others can be part of our story, too.

Really good read! You have a knack for bringing the simplicity of the gospel messages to the reader, just like the quote from Richard G. Scott you included at the end, how simple and yet profound is that message? ( I must admit that I totally had a Whoville moment while reading that quote. It may be my new favorite. )