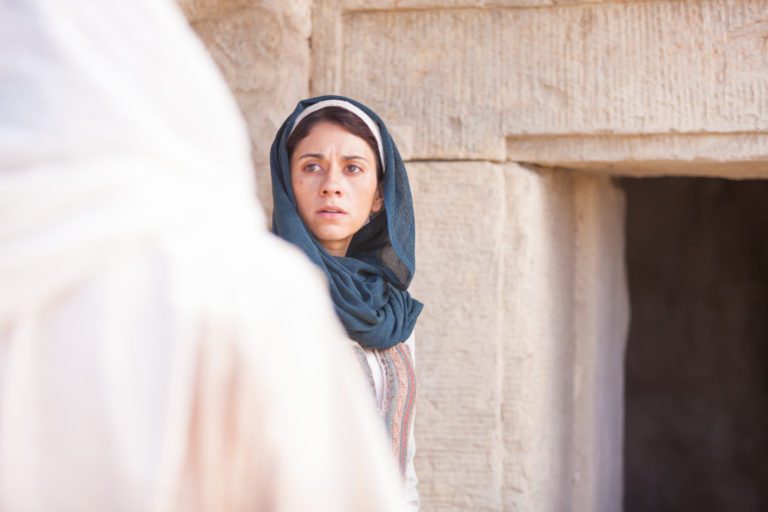 Lessons from the Gospels’ End

Mary Magdalene at the Tomb

You’ve probably seen paintings, watched movies and even just plain read this story so many times. Mary comes to the tomb to find it empty. Then, after telling Peter and John about it (who, by the way, do little more than come and say, “Yep, it’s empty, alright.”) she sits there all alone for a while, crying for probably a million reasons, before (after being comforted by a couple of angels) someone comes to quietly stand behind her. Now, whether it was because it was “yet dark” at the tomb, or because she’d been crying, or simply that, like on the road to Emmaus, her eyes were “holden,” she didn’t recognize the man behind her at first.

When he asked her why she was crying, she assumed he was the gardener and so might have known what had happened to Jesus’ body. So, she asked him, in essence, “Listen, just tell me where you’ve taken Him so I can go get His body,” for “as yet,” John explains, like the rest of the disciples, she probably “knew not the scripture [fully, anyway], that he must rise again from the dead (John 20:9).”

But then He spoke her name. That, it seems, was all it took for her to suddenly recognize the Lord. But here the scriptural account in John (the only one of the Gospels that goes into any depth at all into this particular interaction) kind of gets a bit fuzzy, at least for me. She says, “Rabboni,” or “Master,” then…what? Tries to touch Him? To which, if we follow a strict reading of the King James account, Jesus responds with a preemptive, “Touch me not!,” or, “Don’t touch me!”

Weird, right? He offers as explanation that He had not yet ascended to the Father. In Restoration scripture, I haven’t been able to find even the obscurest passage that explains that resurrected beings have to go to the Father before people can touch them. So, what are we to understand about this scene? Also, why treat Mary this way when literally only a few verses later the Lord asks all the assembled disciples to touch Him, feel His wounds and watch Him eat honeycomb and stuff?

The Greek word for “touch” in this verse (ἅπτου—haptou) doesn’t help much either, as it could, like many other words in the Bible, mean a host of different things.

Here’s the slam dunk for us, though. The Joseph Smith translation changes the verse from “Touch me not” to “Hold me not.” One prominent reading of the Greek term agrees with this rendering, as Bruce R. McConkie mentions in His own commentary on this verse.

And though the change is only one little word, for me, it changes the whole scene. Rather than describing this awkward moment where an overjoyed Mary is stopped dead in her tracks by an inexplicably cold and aloof Jesus, this inspired, restorative change suggests that Mary ran straight to the Savior and held Him—maybe even for a long time—so long that He had to ask her to stop holding Him, as He, of course, had some pretty important things to do (an appointment with His Father chief among them).

I always smirk a little when I read this verse. It reminds me of my grandma. Whenever we would say goodbye to her at the end of a Sunday dinner (and we lived only about 10 minutes away, so we never thought goodbyes were quite as big a deal as Grandma did), we’d hug. And we’d hug and we’d hug. And there would always come a moment when I would be ready for the hug to be done, but Grandma wasn’t even close. So, I’d try to give her signals, like letting my arms fall or giving her the old “double-tap-quick-back-rub” sign that I was ready to go. But she’d always linger with each of us because in her heart of hearts, she didn’t really ever want to see us leave. In times like those, I almost found myself wanting to say, even as a kid, “Grandma, hold me not, for I have seminary at 6 am tomorrow…”

I imagine this moment between Mary and the Lord went down just like this. He was ready to end the hug, but she just wasn’t. And who could blame her? He had died, had been dead for three days. Of course she missed Him! And so it was that the Lord asked her to stop holding Him for a bit, but to go and tell the disciples what she’d witnessed. She didn’t have to worry, after all, for she was to see Him again soon thereafter.

The Road to Emmaus

On the road to Emmaus, the Lord spoke with Cleopas and an unnamed disciple, expounding all scripture to them about the Messiah and what His mortal mission had to be. But later, when their eyes were opened that they might recognize the Lord as He sat and ate in their home, it was not the way He looked or the doctrines He taught that made them recognize Him. They didn’t say, “Oh, remember His beautiful brown eyes” or “He always used to teach like that! That must have been Him!”

No, despite being witnesses to the resurrected Christ, it was something else entirely that helped them recognize Him. Turning to one another after His departure, they said, “Did not our hearts burn within us?” In other words, it wasn’t His visage, personage, nor even the particulars of His heavenly pedagogy that tipped them off on who He was. It was, instead, the Holy Ghost. As we read the New Testament, may we always remember that all our study serves as fertile soil in which the Spirit’s influence may grow. Unaided by the Spirit, such in-depth study may seem cold, calculating and even heartless, at time. But with it, the Lord can teach us anything and we, in turn, can become one with Him.

In the same vein of "touch" meaning "hold me not," and in the light of the cute "grandma experience" cited above, I have always felt that touch/hold me not meant "detain me not"...for I have a schedule to keep. Maybe he, also, would rather not have parted at that time from someone he had such a close relationship with, but he had always kept "being about his Father's business" at the forefront. I have no doubt that Mary understood this. The scriptures are typically the "cliff notes," and someday we will know the full account of all that took place between them in that moment.