Come, Follow Me for Sunday School: “Enter into the Rest of the Lord”, Alma 13-16 | Meridian Magazine 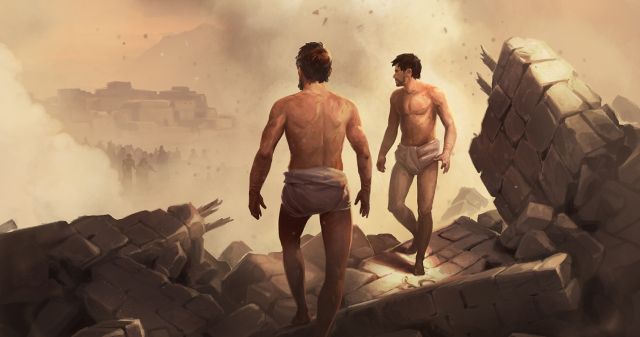 Come, Follow Me for Sunday School: “Enter into the Rest of the Lord”, Alma 13-16

This lesson is a tale of two cities: Ammonihah of the Nehors contrasted with the Salem of Melchizedek. Both cities started as nests of wickedness. A mighty change occurred in one of them but not the other. One city enters into the “rest of the Lord”; the other ends with a new name “Desolation”—a ruin to be avoided due to the stench of death.

In this lesson, Alma and Amulek, two great Book of Mormon prophets, have entered the city of Ammonihah to preach the gospel to the prideful people there. The religion of Ammonihah was Nehorism, the ideology of the apostate Nehor. They believed in God but did not believe repentance was necessary. They practiced priestcraft, supporting an establishment of wealthy, popular religious leaders. This was a society dominated by elite professionals, expert at manipulation of the truth (“learned in all the arts and cunning of the people,” Alma 10:15).

Alma has pleaded with these people not to harden their hearts against the “plan of redemption” but to obey the commandments, so they may enter into “the rest of God” (Alma 12:37). Now he tries to teach them about the salvific role of priesthood in their lives.

What was wrong with the Nehors’ understanding of priesthood?

Alma tells the story of Melchizedek and his city of Salem “to illustrate the doctrine that all people may obtain knowledge of the mysteries of God through humility, righteousness, and the ordinances of the priesthood,” in the words of Latter-day Saint scholar John W. Welch (“The Melchizedek Material in Alma 13:13-19,” from By Study and Also by Faith, Deseret Book, 1990, vol. 2, p. 238).

The Nehors have abandoned the doctrine that priesthood is the power that enables us to enter into the rest of the Lord, and can only be handled on principles of humility and righteousness. The Nehor notion of priesthood is just the opposite. Since there is no need for “redemption,” the purpose of the Nehor priesthood is to “get gain and praise of the world; but they seek not the welfare of Zion” (2 Nephi 26:29). What is the use of “humility and righteousness” with such a world view? The humble and righteous are simply “losers” in that kind of environment.

Melchizedek was a man of God and peace because he had obtained the spiritual powers and knowledge necessary to lead his people into the rest of the Lord. through the order of the Son.

The Lord invites us to enter into His rest.

The words of the prophets will be fulfilled.

God does not always prevent tragedy.

President Spencer W. Kimball once commented on the many seemingly inexplicable tragedies that happen in the world:

“Could the Lord have prevented these tragedies? The answer is, Yes. The Lord is omnipotent, with all power to control our lives, save us pain, prevent all accidents, … even [protect us] from death, if he will. But he will not. …

“If all the sick for whom we pray were healed, if all the righteous were protected and the wicked destroyed, the whole program of the Father would be annulled and the basic principle of the gospel, free agency, would be ended. No man would have to live by faith. …

“… If we were to close the doors upon sorrow and distress, we might be excluding our greatest friends and benefactors. Suffering can make saints of people as they learn patience, long-suffering, and self-mastery. …

“… I am grateful that even through the priesthood I cannot heal all the sick. I might heal people who should die. I might relieve people of suffering who should suffer. I fear I would frustrate the purposes of God.

“Had I limitless power, and yet limited vision and understanding, I might have saved Abinadi from the flames of fire when he was burned at the stake, and in doing so I might have irreparably damaged him. He died a martyr and went to a martyr’s reward﻿—exaltation.

“I would likely have protected Paul against his woes if my power were boundless. I would surely have healed his ‘thorn in the flesh.’ [2 Corinthians 12:7.] And in so doing I might have foiled the Lord’s program. …

“I fear that had I been in Carthage Jail on June 27, 1844, I might have deflected the bullets that pierced the body of the Prophet [Joseph Smith] and the Patriarch [Hyrum Smith]. I might have saved them from the sufferings and agony, but lost them to the martyr’s death and reward. …

“With such uncontrolled power, I surely would have felt to protect Christ from the agony in Gethsemane, the insults, the thorny crown, the indignities in the court, the physical injuries. I would have administered to his wounds and healed them, giving him cooling water instead of vinegar. I might have saved him from suffering and death, and lost to the world his atoning sacrifice. …

“In the face of apparent tragedy we must put our trust in God, knowing that despite our limited view his purposes will not fail” (Teachings of Presidents of the Church: Spencer W. Kimball [2006], 14–17, 20).

Margaret Barker, The Great High Priest: The Temple Roots of Christian Liturgy, London: T&T Clark, 2003, The Qumran texts have given new insights … The Melchizedek text … depicts the heavenly high priest bringing salvation to his people on the great Day of Atonement. 27

Qumran people “have been secretly preserving the teachings of the temple, when there was a Melchizedek priesthood.” P. 37

“The mystery of the Eucharist was associated with Melchizedek. Eusebius wrote, ‘Our Saviour Jesus, the Christ of God, even now performs through his ministers today sacrifices after the manner of Melchizedek.” 63

“Rites and duties associated with Aaron probably came from the older royal priesthood of Melchizedek.” 75

Robert L. Millet, The Holy Order of God.” In The Book of Mormon: Alma, The Testimony of the Word, Provo, UT: Religious Studies Center, 1992, p. 72. “In  reading  Alma  13 in  context—as  a part  of  a  larger sermon—we begin to see that the idea of entering the rest of the Lord is a central theme. The word rest . . . is mentioned five times in chapter 13. . . . A person enters the rest of God when he or she gains a testimony of the gospel, and is brought out of worldly confusion into the peace and security that comes only from God. In this sense, the rest of God is the spiritual rest and peace which are born from a settled conviction of the truth.”

“Of the Israelites, Jehovah said: “I have sworn in my wrath, that  they shall not enter into my presence, into  my rest, in the days of their pilgrimage” (JST, Ex 34:2). Here the rest of the Lord is equated with  being  in the personal presence of the Lord.” P. 73

“They were called after this holy order, and were sanctified, and their garments were washed white through the blood of the Lamb. Now they, after being sanctified by the Holy Ghost, having their garments made white, being pure and spotless before God, they could not look upon sin save it were with abhorrence; and there were many, exceedingly great many, who were made pure and entered into the rest of the Lord their God” (13:11-12). “We can grasp and apply this vital lesson from the past: Those of us who magnify our callings in the priesthood are sanctified—made pure and holy—by the renovating powers of the Spirit (see D&C 84:33). We come in time to hate sin and to love and cherish righteousness. We are at peace in a troubled and turbulent world.”  P. 74

“Melchizedek is the prototype, the example, the scriptural illustration. He received the priesthood, magnified callings in the priesthood, and chose to work righteousness. He made it possible for himself and his people to enter into the rest of the Lord through applying the atoning blood of Christ and by virtue of the sealing powers of the priesthood.” P. 83 “Having faith on the Lord; having a hope that ye shall receive eternal life; having the love of God always in your hearts, that ye may be lifted up at the last day and enter into his rest” (13:29).