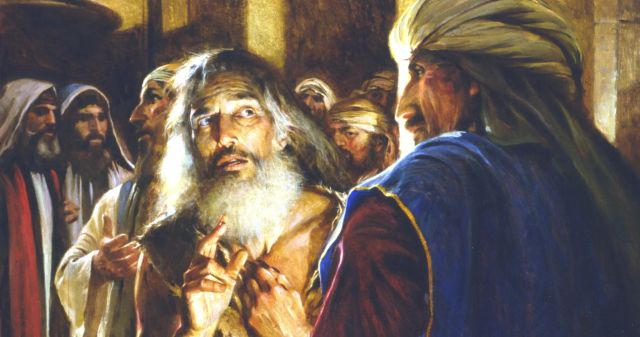 Jeremiah lived at the time of Lehi and Nephi and confronted the same twisted culture of Jerusalem that had abandoned true worship of God and replaced it with pride, greed, and idolatry. Like Lehi, Jeremiah went among the people to preach repentance, only to be rejected and persecuted.

Like Lehi, Joseph Smith, Enoch, and so many other prophets called to deal with a wicked generation, Jeremiah needed divine preparation for his mission. That preparation consisted of an endowment of knowledge and power so that Jeremiah would understand the full scope of the Lord’s plan. Jeremiah needed to know who he was and what he was up against. He also needed to know about the power of the infinite and eternal atonement to restore his people if they would repent.

So, the Lord opened up the plan to Jeremiah. First, He showed him the premortal life and his role in it. “Before I formed thee in the belly I  knew thee; and before thou camest forth out of the womb I sanctified thee, and ordained a prophet unto the nations” (Jer. 1:5).

The youthful Jeremiah shrank from this calling, saying “Ah, Lord God! Behold, I cannot speak: for I am a child” (1:6). But the Lord built his confidence by telling him who really was—an eternal being, a noble and great one set apart to his calling before the world began.

President Russell M. Nelson explains in greater detail the value of the knowledge that was revealed to Jeremiah at that time:

“Your spirit is an eternal entity. The Lord said to His prophet Abraham: ‘Thou wast chosen before thou wast born’ [Abraham 3:23]. The Lord said something similar about Jeremiah and many others [see Alma 13:2–3]. He even said it about you [see Doctrine and Covenants 138:55–56].

“Your Heavenly Father has known you for a very long time. You, as His son or daughter, were chosen by Him to come to earth at this precise time, to be a leader in His great work on earth. You were chosen not for your bodily characteristics but for your spiritual attributes, such as bravery, courage, integrity of heart, a thirst for truth, a hunger for wisdom, and a desire to serve others.

“You developed some of these attributes premortally. Others you can develop here on earth as you persistently seek them” (“Decisions for Eternity,” Ensign or Liahona, Nov. 2013, 107).

After this revelation, the Lord opened up a vision to him: “Jeremiah, what seest thou? And I said, I see a rod of an almond tree. Then said the Lord unto me, Thou hast well seen: for I will hasten my word to perform it” (Jer. 1:11-12).

Lehi and Nephi, Jeremiah’s contemporaries, also had a vision of this tree (see 1 Ne. 8, 11). Throughout the scriptures, the almond with its white blossoms is an exquisite symbol of the Savior. It represents  the promise made at the Creation, that we might someday qualify to “eat of the tree of life,” the “representation of the love of God” (1 Ne. 11:25). To Adam and Eve, it stood for the ultimate promise of everlasting life. To ancient Israel, the image of the tree of life was the almond, its flowers the earliest to appear in the spring as precursors of returning life. Even the Menorah, the seven-branched candelabra that lighted the temple, was a stylized almond tree. Jeremiah would have understood that when the plan is fulfilled, the fruit of the tree would be freely provided to the whole family of God (22:2), as when Lehi pleaded with his family to “partake of the fruit” (1 Ne. 8:15-17).

For Nephi, the image of the tree symbolized the Savior’s mission. No doubt, despite the brevity of the account of Jeremiah’s vision of the almond branch, he too understood the great significance of this image, and it would have given him hope for the covenant people of Israel.

Ironically, the Jews of Jeremiah’s time adopted the pagan custom of tree worship, thus distorting the image of the tree of life. “Thou hast scattered thy ways to the strangers under every green tree, and ye have not obeyed my voice, saith the Lord” (Jer. 3:13). “To scatter thy ways” ought to be translated “open up thy charms,” meaning to provide sexual favors to “strangers” in the shade of trees set apart for the worship of Asherah, a pagan goddess. This is the kind of sacrilege Jeremiah was faced with.

Now the Lord presented Jeremiah with a second image: “Jeremiah, what seest thou? And I said, I see a seething pot; and the face thereof is toward the north” (Jer. 1:13). (Most translators say “away from the north.”) The Lord explains this image: “Out of the north an evil shall break forth upon all the inhabitants of the land. For, lo, I will call all the families of the kingdoms of the north, saith the Lord; and they shall come, and they shall set everyone his throne at the entering of the gates of Jerusalem” (Jer. 1:14-15).

If you look at a map of the Middle East, you can see that invading armies would approach Israel from the north, along the right arm of the Fertile Crescent (otherwise the armies of Assyria and Babylon would have to cross an extensive desert). Thus, ancient Israel thought of the north as the source of calamities and evil. Jeremiah knew that the Assyrians had attacked and destroyed the northern kingdom and prophesied the same fate would befall the southern kingdom of Judah at the hands of the Babylonians. The seething pot represented those rapacious armies about to boil over and overrun his people because they had abandoned their covenants and lost the Lord’s protection.

The image of the boiling pot has symbolized the abode of Satan since ancient times. Pandora’s box, from which all the evils of the world escaped, was not a box but a large cauldron half buried in the ground. John the Revelator pictured Satan’s kingdom as a steaming abyss spewing out a toxic cloud and hordes of flying demons (see Rev. 9:1-3).

When Adam and Eve first encountered Satan, he swore that he would take possession of them and their family. Likewise, Jeremiah tells his people that Babylon will “set thrones at the gates of Jerusalem,” thus usurping control over the holy city. Satan’s plan to rule depends on the willingness of God’s children to submit to him; therefore, Jeremiah pleads with them to return to God and avoid being overtaken and ruled by Satan.

They refuse to hear Jeremiah, so the cauldron of war boils over and destroys Jerusalem. “Thus saith the Lord God; Behold, mine anger and my fury shall be poured out upon this place, upon man, and upon beast, and upon the trees of the field, and upon the fruit of the ground; and it shall burn, and shall not be quenched” (Jer. 7:20). Jeremiah’s prophecy was fulfilled when the Babylonians laid waste to Judah and took many of the Jews captive.

Every one of us faces these two visions: the tree of life that represents the love of God and the boiling pot that represents the burning hatred of Satan. We all face the choice of devoting ourselves to one or the other. We can make our covenants with our Father or with our sworn enemy.

Although Israel of Jeremiah’s time chose to violate their covenant with Father, He will never abandon His covenant with Israel. Although the family of Israel was scattered, Heavenly Father promises through Jeremiah to recover them again. “Only acknowledge thine iniquity, that thou hast transgressed against the Lord thy God. . . . Turn, O backsliding children, saith the Lord; for I am married unto you: and I will take you one of a city, and two of a family, and I will bring you to Zion” (3:13-14).

Father compares his faithfulness to the highest covenant we can make: the eternal marriage covenant. So, Jeremiah foretells the restoration of Israel as the gathering of an eternal family, “one of a city, and two of a family.” In the latter days, the Lord will “bring up the children of Israel from the land of the north, and from all the lands whither he had driven them” (Jer. 16:15).

Father will endow Israel with “pastors according to mine heart, which shall feed you with knowledge and understanding” (Jer. 3:15).  These pastors, or shepherds, will provide a certain kind of knowledge, deah in Hebrew, which means “divine knowledge,” or gospel understanding. In other words, to gather Israel the Lord will send authorized ministers who will teach the true plan of salvation.

Evil and enmity will be a thing of the past when the latter-day gathering concludes: “In those days the house of Judah shall walk with the house of Israel, and they shall come together” (Jer. 3:16). The members of God’s family will be eternally sealed and exalted. “Thou shalt call me, My father; and shalt not turn away from me” (Jer. 3:19).

Thus, Jeremiah gives an overview of the plan of salvation from the premortal existence to the final sealing of the righteous. Ordained to minister before we come to this earth, we enter the mortal existence to be faced with the choice of the blessings of the tree of life or the cursings of Satan. We learn of the power of the Atonement to rescue the backslider who repents. We learn of the great restoration when Father will gather His family into one through the ministering of authorized servants.

In short, we learn from Jeremiah who we are, where we came from, what our choices and responsibilities are in this life, and what we have to hope for through the plan of redemption.

Therefore, this is the question asked of us by this lesson: What difference does it make to us individually to understand this message of Jeremiah?