Come, Follow Me for Sunday School: “Be Ye Doers of the Word, and Not Hearers Only”, James | Meridian Magazine 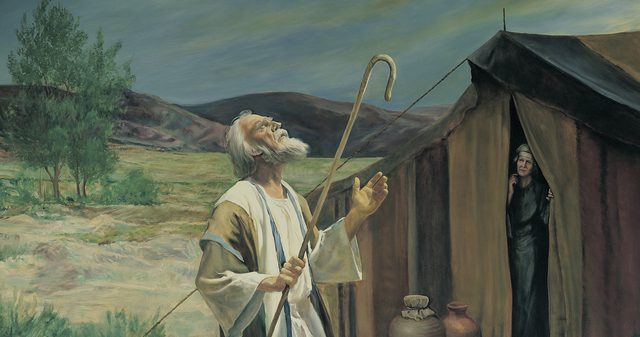 Come, Follow Me for Sunday School: “Be Ye Doers of the Word, and Not Hearers Only”, James

Cover image: Abraham on the Plains of Mamre, by Grant Romney Clawson.

How to Meet God Every Day

When I met Rabbi Rivlin, he was teaching at a tiny synagogue in one of Jerusalem’s oldest neighborhoods. Every morning when I came to visit, he would smile and shake my hand in welcome.

But then he would do something a bit unusual. Grasping my hand firmly in his, he would look straight at me with his twinkling eyes. “Shalom,” he would say. Then, letting go of my hand, he lifted his own to his lips, kissed it directly on the knuckle of his right forefinger, then placed it, palm open, over his heart, just as if someone were about to sing the national anthem.

“Rabbi,” I asked one day with timid curiosity, “why do you kiss your hand like that after you greet me?” Rabbi Rivlin’s normally jovial grin turned suddenly more contemplative.

“When I meet you,” he began, “I say ‘Shalom.’ Now, most people think that this word just means “peace” or some such nonsense. For us, though,” he went on, “Shalom is one of the names of God. I say His name when I see you because I recognize His light and likeness in you. He lives in you, Isaac. You are His child. So, to honor that—to honor the divinity within you—I say His name. And because my hand touched the hand of another made in the image and likeness of God, I kiss it and put it on my heart to honor the blessing of our encounter.”

To Rabbi Rivlin, simply pronouncing Shalom did more than just honor a person’s divine nature. It invited God’s presence to attend even a moment as simple as saying hello. In other words, to him, the spoken word was powerful—powerful enough, even, that God Himself might incline his ear and listen to its message.

The idea that audible speech is filled with power weaves itself in and out of human civilization. Jews invoke the name of God in a simple greeting. Muslims pray five times a day when called by the sound of a human voice and the power of the spoken word. Hindus chant their scripture, the Vedas, out loud in long, sustained sessions of deepest pondering, relying upon the workings of the human voice to enlighten their understanding. And Buddhists the world over chant the Om Mani Padme Hung verse again and again, using the cadence and rhythm of their repeated prayer to etch lessons onto their very souls.

In short, our words are powerful, even sacred, and it’s no secret to those with ears to hear.

Fiction, too, is filled with stories of words and their power to bring about either great good or great evil. The most effective spells at Hogwarts—those that caused the most potent changes in their subjects—were spoken aloud by those who cast them. In his training, Eragon the Dragonrider learned the ancient language whose very words had the power so potent it was almost too dangerous to teach them. Percy Jackson is forbidden from saying the name of his enemy Kronos because, as his teachers tell him, names said aloud have power. Gandalf opens the gates to the Mines of Moria by speaking a true password and Aslan creates Narnia by nothing more than the sound of his voice.

Again, we see that words—spoken words—have a power so potent as to be worthy of both story and song.

James teaches this truth throughout his short five chapters. Like the bit in a horse’s mouth[i] or a ship’s rudder,[ii] he says, our words, though small, are clothed in immense power. But that power can serve ends both good and ill. And that makes them a little dangerous—not dangerous like a poisonous snake or a hungry shark, but more like a power tool. Used for good, such tools can accomplish wonders, but in the wrong hands, horrible accidents can happen. In James’ own words, like a tiny spark,[iii] our words ignite many a fire that can either consume us in wroth or envelop us in warmth. And while we may be able to tame all manner of wild animals—beasts, birds, fish and snakes[iv]—few, if any, warns James, can tame the tongue that utters them.

Even the foundation principles of the Gospel of Jesus Christ work by the power of the spoken word. “Faith,” wrote the Prophet Joseph, “works by words; and with [words] its mightiest works have been, and will be, performed.” The scriptures abound with such examples in nearly every dispensation. “God said, ‘Let there be light: and there was light.’ Joshua spake, and the great lights which God had created stood still. Elijah commanded, and the heavens were stayed for the space of three years and six months, so that it did not rain…All this was done by faith”—a faith made real by the spoken word.[v]

It was following James’ earlier advice to “ask of God” that led Joseph Smith to the Sacred Grove. But he did not go to simply ponder in his mind or pronounce the words of a fervent prayer in the quiet of his heart. No, he prayed aloud and the result was the greatest manifestation of truth the world had seen for nearly two thousand years. Indeed, it was, he takes special care to say in his record of the event that “it was the first time in [his] life that [he] had made such an attempt, for amidst all [his] anxieties [he] had never as yet made the attempt to pray vocally.”[vi]

We do not know how many times he had pondered or prayed for answers in his heart. But it seems that the moment he chose to give voice to his question in a sincere, vocal prayer, the heavens opened and his prayer of faith was answered.

In other words, faith-filled words are more powerful than “a two-edged sword.”[vii] Perhaps our words, whether in prayer or in speaking with those we love, can have a similar power in our lives. As we make choices about what we say and how we say it, let’s remember that every word we speak has a “more powerful effect upon the minds of the people than the sword, or anything else.”[viii]

But while the spoken word can “avail much” to the righteous,[ix] it can also be “an unruly evil, full of deadly poison.”[x] Though a fountain cannot “send forth…sweet water and bitter,”[xi] or a “fig tree…bear olive berries,”[xii] our own voices can bless God in one moment, and curse our neighbor in the next without so much as a second thought. This, James firmly declares, simply “ought not to be.”[xiii]

Instead we must “put off the natural man,” “yield to the enticings of the Spirit,”[xiv] and treat one another with “gentleness, meekness and love unfeigned.”[xv] It’s as simple as that. We must love one another—not just within the hidden quietude of the heart, but with our words, out loud, for those we love to hear, see, feel and know.

For though it is, wrote Joseph Smith, “by words…[that] every being works when he works by faith,” the greatest of these word-wrought miracles are those which “lift up the hands which hang down and strengthen the feeble knees.”[xvi] The words we speak to others, even to ourselves in the quiet reaches of the night, are heard by God as well. For, just as Rabbi Rivlin taught me, when we speak to our fellow men, made in the image and likeness of God, it is as if we are speaking to God Himself. As Elder Holland taught,

With such words, spoken under the influence of the Spirit, tears can be dried, hearts can be healed, lives can be elevated, hope can return, confidence can prevail…More importantly, please know that your Father in Heaven loves you and so does His Only Begotten Son. When They speak to you—and They will—it will not be in the wind, nor in the earthquake, nor in the fire, but it will be with a voice still and small, a voice tender and kind. It will be with the tongue of angels. May we all rejoice in the thought that when we say edifying, encouraging things unto the least of these, our brethren and sisters and little ones, we say it unto God.[xvii]