Come, Follow Me for Sunday School: “After Much Tribulation . . . Cometh the Blessing”, Sections 102-105 | Meridian Magazine 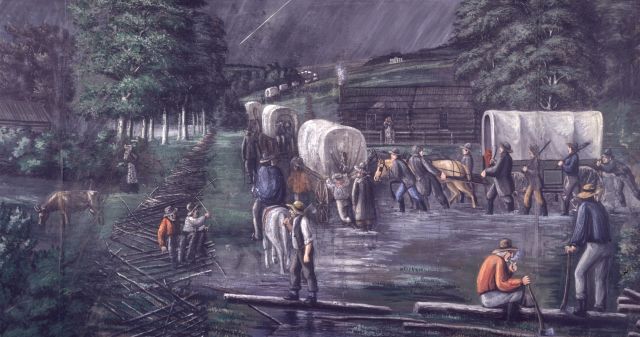 In February 1834, after the Missouri saints had been forced off their land, the Lord instructed Joseph Smith to gather an army to redeem Zion—to negotiate with the local antagonists of the saints their return to the lands they had purchased. Joseph gathered several hundred men and women to march from Kirtland, Ohio, to Independence, Missouri, a distance of 800 miles. The Prophet called this group the “Camp of Israel,” or “Zion’s Camp.”

The journey to Zion was full of hardships. By the time they got going, it was late spring, and heat, heavy rains, and humidity made the volunteers miserable. Rivers and muddy prairies slowed their progress. Cholera ravaged the camp, killing at least fourteen of the marchers. But there were blessings as well: A sudden rainstorm raised the level of a modest river so high that it cut off a mob that threatened the camp. Finally, after about seven weeks of march, the Prophet received a revelation: “In consequence of the transgressions” of the saints in Zion, the Lord wanted the elders to “wait for a little season for the redemption of Zion” (105:9).

At this point, the Prophet disbanded the camp. He said that “he was now willing to return home, that he was fully satisfied that he had done the will of God, and that the Lord had accepted our sacrifice and offering, even as he had Abraham’s when he offered his son Isaac.” Although Zion’s Camp did not achieve the objective of redeeming the land of Zion, the Lord said, “It is expedient in me that they should be brought thus far for a trial of their faith” (105:19).

The real purpose of Zion’s Camp, then, was to test the faith of the saints who made the journey, many of whom later became prominent leaders of the Church, such as Brigham Young and Wilford Woodruff. The Lord led them by the hand through this valley of testing: “Though I walk in the midst of trouble, thou wilt revive me . . . Thy right hand shall save me” (Ps. 138:7) as He saved Israel in the wilderness between Egypt and Canaan. Like Zion’s Camp, the Exodus of the Israelites is a model for our mortal journey.

For the Jews of Christ’s time, the most important event in their history was the Exodus from Egypt to the promised land. They read tremendous significance into this journey from slavery, both spiritual and literal. For them, the Exodus became a metaphor for mortal life, for moving from ignorance to knowledge, from dependency to maturity, and from captivity to salvation.

Like Zion’s Camp, the Exodus of Israel was an arduous trial of faith. The faith of the Israelites often wavered. The headstrong children of Israel were “a stubborn and rebellious generation” (Ezek. 78:8), “a sinful nation, a people laden with iniquity” (Isa. 1:4). Even after their liberation they looked back with longing for the “fleshpots” that represented the comforts of Egypt (Num. 11:5). They worshipped a “golden calf,” likely a representation of Pharaoh as an embodiment of the sun god, to go before them back to Egypt (Exod. 32:4).

The key failing of Israel in the wilderness was covetousness. For this same failing, the Lord chastised many of the saints in Missouri: “They have broken the covenant through covetousness” (104:4). Because they were unwilling to live the law of consecration, “the law of a celestial kingdom,” they would not be allowed to build up Zion. “They have not learned to be obedient to the things which I required at their hands, but are full of all manner of evil, and do not impart of their substance, as becometh saints, to the poor and afflicted among them; and are not united according to the union required by the law of the celestial kingdom” (105:3-4).

Anciently, the Israelites shrank from entering the promised land out of fear and lack of faith. They were not spiritually prepared to live a celestial law of consecration, so the Lord gave them a lesser law and required them to take a forty-year trek through the wilderness (84:23-24). That desert journey tried and refined them through hardships until their hearts were softened, “for after much tribulation come the blessings” (103:12). Those who went through the travail of Zion’s Camp with Joseph Smith had much the same experience.

The story of Zion’s Camp can be likened to our own individual spiritual journeys as we follow the Savior. We each must take our own rite of passage to the promised land. An inheritance awaits us in that land, but only if we pay the price, as Elder Jeffrey R. Holland says:

One of the unfailing facts of mortal life is the recurring presence of trouble. When these difficult days (and nights!) come—and they will—it will help us to remember that “it must needs be,” that in the grand council of heaven before the world was, we agreed to such a time of challenge and refinement. We were taught then that facing, resolving, and enduring troublesome times was the price we would pay for progress. And we were committed to progress eternally (For Times of Trouble: Spiritual Solace from the Psalms, Salt Lake City: Deseret Book, 2012).

Elder David A. Bednar has said: “At some point in each of our lives, we will be invited to march in our own Zion’s Camp. The timing of the invitations will vary, and the particular obstacles we may encounter on the journey will be different. But our ongoing and consistent response to this inevitable call ultimately will provide the answer to the question ‘Who’s on the Lord’s side?’” (“On the Lord’s Side: Lessons from Zion’s Camp,” Ensign, July 2017, 35).