Come, Follow Me for Sunday School: Acts 16-21, “The Lord Had Called Us for to Preach the Gospel” | Meridian Magazine 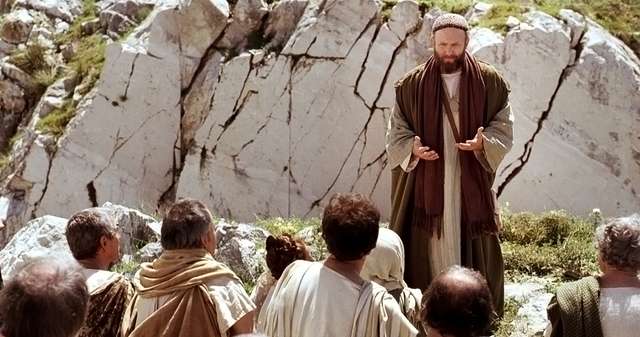 Come, Follow Me for Sunday School: Acts 16-21, “The Lord Had Called Us for to Preach the Gospel”

This part of the New Testament has always been difficult for me to understand. The language of Acts, though not quite as complicated as some of Paul’s letters later on, seems a bit trickier than the straightforward plainness of the four Gospels. And yet, I’ve found a few things that have helped me along the way.

With these principles in mind, here are three lessons from Acts 16-21 that have made a difference to me. I share them in the hopes that they might shed further light on those things in your lives that could use a little illumination, too.

1. Don’t love the search for truth so much that you aren’t willing to give it up when you find an answer

Throughout these chapters, Paul encounters communities of Jews living outside the land of Israel. Meeting with them in their synagogues, Paul uses his formidable understanding of the scriptures to discuss the Gospel with them, trying his best to convince them that Jesus of Nazareth was truly the Messiah. While some were converted, others did not believe and grew angry, often pursuing Paul and his companions to other cities in order to persecute them.

This, perhaps, could have had a little to do with the Jewish way of studying at the time. Rather than seek answers that were easily explainable, capable of being written down in a sentence or two, many Jews of the first century sought after answers they saw as more profound. For this reason, perhaps, 1 Corinthians 1:23 explains that Jesus was a “stumblingblock” to the Jews, for, as Jacob explained in the Book of Mormon:

But behold, the Jews were a stiffnecked people; and they despised the words of plainness, and killed the prophets, and sought for things that they could not understand. Wherefore, because of their blindness, which blindness came by looking beyond the mark, they must needs fall; for God hath taken away his plainness from them, and delivered unto them many things which   they cannot understand, because they desired it. And because they desired it God hath done it, that they may stumble.

And now I, Jacob, am led on by the Spirit unto prophesying; for I perceive by the workings of the     Spirit which is in me, that by the stumbling of the Jews they will reject the stone upon which they might build and have safe foundation. (see Jacob 4:14-15)

Contrast this way of seeing the world with what the Lord preached in Matthew 13:45-46: “Again, the kingdom of heaven is like unto a merchant man, seeking goodly pearls who, when he had found one pearl of great price, went and sold all that he had, and bought it.”

Sometimes we spend so much time looking for an answers that when it comes, we have fallen in love with the search more than the answer. Yes, finding the answer will close that chapter of our searching, but there still remains so much more to be understood. So, let’s follow the example of the Lord and lay our burden down when we reach the feet of the Savior. If we have questions, let us search them. But when answers come, let us love them as the pearls of great price they are. This doesn’t mean we shouldn’t love the journey. But if Christ is the Answer, our great Destination, our journey to Him will be precious, but never moreso than Him.

2. When you follow the Spirit, don’t expect everything to go perfectly. It didn’t for Paul.

In Acts 16:6-7, the Spirit tells Paul not to preach in certain areas of the world along his journey. While this may sound strange (the Lord had commanded His disciples to preach the Gospel to every nation, after all), the Lord gives Paul specific instruction to go to a certain place later on. While that revelation may have been quite clear, it did not give Paul a free pass so that everything thereafter would be easy. In Acts 16:22-33, Paul follows the promptings he received both of where not to go as well as where to go in the end, only to find himself at the mercy of some very unmerciful people. After being beaten and whipped, then were imprisoned. In that moment, it may have seemed to Paul that he had done something wrong. Had he misinterpreted the promptings? Or if he hadn’t, what could the Lord have intended by placing him on such a difficult path?

Rather than ask such questions (questions that I myself have too often asked when faced with much less harrowing experiences after having following a prompting), Paul stays the course. In the end, he not only gets medical help from his jailor, but ends up converting him to Christianity! Had Paul freaked out, for lack of a better term, who knows if the Lord’s purposes would have been fulfilled? Had Nephi freaked out when he broke his bow (all the while on a journey that came from his following the Spirit, I might add), what would have become of him and his family in the wilderness? What of Joseph Smith in Liberty Jail? Or Abraham sacrificing Isaac? Or any of the myriad prophets who have faced such odds?

In essence, then, the question isn’t whether we’ll face trials as we follow the Spirit, but what we will do once they come our way. So, don’t be surprised when things don’t seem to be turning out the moment you start obeying a prompting. If Paul’s story is any indication, stick with it despite what may seem to be rough times, because in the end, the Lord never breaks His promises and never puts us through a wasted and meaningless trial.

3. To share the Gospel, know your scriptures, yes, but know the people, too

When Paul went to Mars’ Hill to preach to the gathered Greeks there, he didn’t just start at Genesis and explain the whole of scripture devoid of context or explanation. Yes, he had preached to many communities of Jews in their synagogues. And yes, his knowledge of the scriptures had made such a difference to them that many were converted to the Gospel. However, that was a certain kind of audience. Paul knew them because he was, after all, Jewish. But those in Acts 17 weren’t Jewish, but Greek and had an entirely different way of seeing the world. Volumes and volumes have been written since that time about the difference between Hebrew and Greek thought, and scholars still invoke this difference to explain all sorts of philosophical, historical and religious trends throughout Western history.

But Paul took a simpler approach. When it came time to preach the Gospel to the Greeks, he started from a place they could understand. “For as I passed by,” he began, “I found an altar with this inscription: TO THE UNKNOWN GOD.” From that starting point—a point that everyone present could understand from their own cultural context—Paul began to preach the Gospel to them. And while he may not have converted everyone, the scriptures name at least two people who believed after what he taught. So, while it is crucial to know the scriptures in order to preach the Gospel (you can’t preach something you don’t understand, after all), it is perhaps even more crucial to the people you’re preaching to that you know them and (at least on some level) understand where they’re coming from. In short, it is as the old adage says: people don’t care how much you know until they know how much you care.

Thank you for this very insightful read. Paul is a very interesting character and such a talented missionary. You brought this out beautifully.

Love Issac’s comments and insights. I hadn’t thought of any of those three principles but now I will. Thank you Prof Calvert!