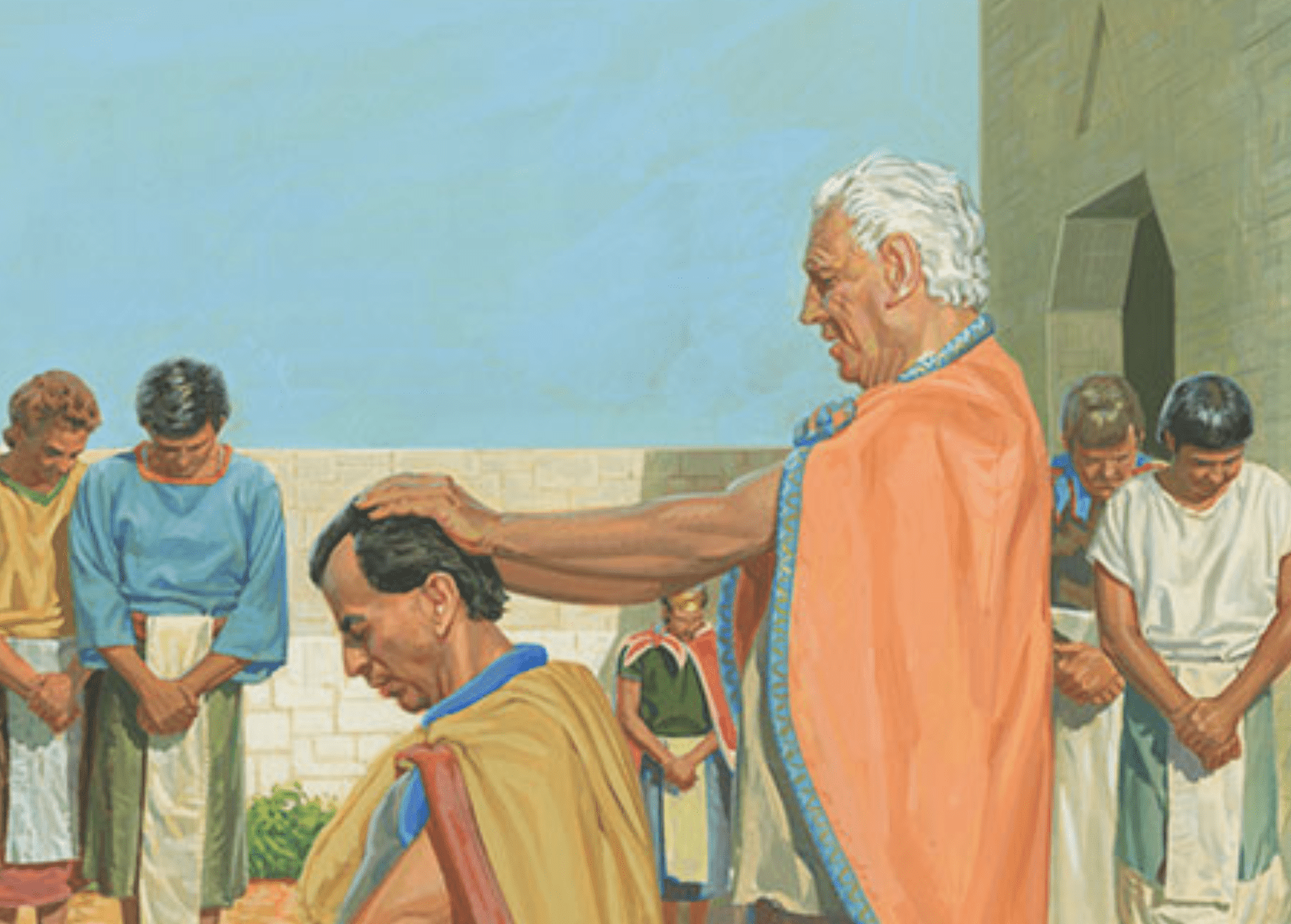 Come, Follow Me for Sunday School: “A Mighty Change”, Mosiah 4-6

Each year the Saints gather during the autumn season in General Conference to hear the word of the Lord from our Prophet. This is a very ancient pattern in the house of Israel, going back at least as far as the prophet Jacob (see Genesis 49). Moses commanded the Israelites to gather at the temple each year at the end of the harvest for the Feast of the Tabernacles. They were to live in temporary huts called sukkot for seven days of prayer and hearing the word of the Lord (see Leviticus 23:42-43).

The occasion of King Benjamin’s final sermon was probably the Feast of the Tabernacles. The people of Zarahemla gathered and set up temporary dwellings. “When they came up to the temple, they pitched their tents round about, every man according to his family . . . with the door thereof toward the temple” (Mos. 2:5-6). (It’s interesting to note that the great Tabernacle in Salt Lake City faces the Salt Lake Temple.)

Why did the Lord command the Saints to gather in this way?

The huts or tents reminded them that their ancestors lived in tents (booths) for forty years in the wilderness before they could prove themselves worthy of entering the Promised Land. “Ye shall dwell in booths [sukkot] seven days; all that are Israelites born shall dwell in booths: That your generations may know that I made the children of Israel to dwell in booths, when I brought them out of the land of Egypt” (Lev. 23:42-43). The tabernacles remind us of the temporary nature of our mortal sojourn here on earth.

The intent of the Feast of the Tabernacles was also to purify the temple and the people. The priests would pour a jug of water on the altar each day of the feast to symbolize the purifying spirit of the Lord poured out upon the people. When Jesus went up to the temple to teach on the Feast of the Tabernacles, He cried out, “If any man thirst, let him come unto me, and drink. . . . Thus spake he of the Spirit, which they that believe on him should receive” (John 7:37, 39). Similarly, the people of Zarahemla came to the festival to be purified: “They all cried aloud with one voice, saying: O have mercy, and apply the atoning blood of Christ that we may receive forgiveness of our sins, and our hearts may be purified” (Mos. 4:2). It’s interesting to note that King Benjamin’s name means “son of the right hand,” an epithet for Jesus Christ (see Psalm 80:11; Mark 14:62).

Purification from sin was a major theme of the meeting at the temple. We are told that we might choose to drink living water—or “damnation to our souls”: “Men drink damnation to their own souls except they humble themselves . . . and believe that salvation was, is, and is to come, in and through the atoning blood of Christ” (Mos. 3:18). The unrepentant will “be consigned to an awful view of their own guilt and abominations, which doth cause them to shrink from the presence of the Lord [for] they have drunk damnation to their own souls” (Mos. 3:25). But those who enter the covenant will not “drink out of the cup of the wrath of God” (Mos. 5:5).

“According to the words which King Benjamin had spoken unto them,” the people of Zarahemla plead to be purified by the atoning blood of Christ. They receive a “remission of their sins” and have “peace of conscience,” which fills them with joy. Still, there’s more to consider. They have accomplished one of the great purposes of the solemn assembly—receiving a remission of sins—but now they must retain a remission of their sins.

Elder Kyle S. McKay says, “Cancer patients undergo treatment in order to put the cancer in remission,” but remission is not the same as a cure. “Although remission provides relief and hope, cancer patients always hope for something beyond remission—they hope to be cured. . . Staying in remission, or in other words, retaining a remission of sins, is crucial to being completely cured. We must not only be cleansed from sin but also cured of sinfulness” (“A Mighty Change of Heart,” Ensign, April 2020, pp. 27-28). And the cure requires a “mighty change of heart.”

How does that change of heart come about?

By “calling on the name of the Lord daily.” By exemplifying and teaching our families to “love one another and serve one another.” The change of heart comes primarily through service to others. King Benjamin teaches, “For the sake of retaining a remission of your sins from day to day, that ye may walk guiltless before God—I would that ye should impart of your substance to the poor, every man according to that which he hath, such as feeding the hungry, clothing the naked, visiting the sick and administering to their relief, both spiritually and temporally, according to their wants” (Mos. 4:26). By ministering to the needs of our neighbors we retain a remission of our sins. Ministering also changes our hearts.

“Are we not all beggars?” the king asks (Mos. 4:19). Of course we are. Some people need food, clothing, shelter, or medical help, and the Lord has asked us to contribute generously to their relief. Beyond that, every single one of us needs someone to “administer to our relief spiritually.” Who doesn’t plead, usually in silence, for a kind friend, an understanding ear, an inspired minister who can help answer their most deeply felt yearnings? As we minister faithfully, our hearts are softened and that “mighty change” is brought about.

At length, after they have been purified and their hearts changed, the people are ready to fulfill another purpose of the gathering at the temple: To renew their covenants with God. The Law of Moses says that the feast “shall be an holy convocation unto you; and ye shall offer an offering by fire unto the Lord: it is a solemn assembly” (Lev. 23:36). The sacrifice was a token of the covenant. The people of Zarahemla did likewise: “They also took of the firstlings of their flocks, that they might offer sacrifice and burnt offerings according to the law of Moses” (Mos. 2:3). This token symbolized the atoning blood of Christ, which the people yearned for.

The ancient Feast of Tabernacles was an ordinance of the temple. King Benjamin commands his people to gather “that you should hearken unto me, and open your ears that ye may hear, and your hearts that ye may understand, and your minds that the mysteries of God may be unfolded to your view” (Mos. 2:9). The “mysteries” of God are temple ordinances. The word “mystery” comes from the ancient Greek musterion, a ritual for which one must qualify oneself.  A person conducted through this ritual was a mustes, an “initiated one.”

In this rite and ordinance, King Benjamin put his people under covenants of consecration and obedience. The covenant of consecration requires the people to “impart of the substance that ye have one to another” (Mos. 4:21). The people are also asked to repeat the words: “We are willing to enter into a covenant with our God to do his will, and to be obedient to his commandments in all things” (Mos. 5:5)—a covenant of obedience.

As the people take upon themselves these covenants, they receive a new name. This is a key reason for the solemn assembly, as King Benjamin explains. “I shall give this people a name; . . . and this I do because they have been a diligent people in keeping the commandments of the Lord” (Mos. 1:11). At the conclusion of the temple ordinance, Benjamin says, “And now, because of the covenant which ye have made ye shall be called the children of Christ, his sons, and his daughters: for behold, this day he hath spiritually begotten you” (Mos. 5:7). The name of Christ “is the name that I said I should give unto you. . . . I would that ye should remember to retain the name written always in your hearts” (Mos. 5:11-12).

After the ordinances, King Benjamin “thought it was expedient . . . that he should take the names of all those who had entered into a covenant with God to keep his commandments” (Mos. 6:1). So, each person affirmed the covenant with his own name as well as the name of Christ.

We are also asked to put ourselves under covenant to obey the commandments and to minister to the needs of others. By doing so, we will experience that “mighty change of heart” referred to by King Benjamin.

Elder McKay adds, “It should be remembered that experiencing a mighty change of heart is a process over time, not a point in time. The change is usually gradual, sometimes incrementally imperceptible, but it is real, it is powerful, and it is necessary. If you have not yet experienced such a mighty change, I would ask of you: Have you repented and received a remission of your sins? . . . Do you observe the commandments of God? If you do these things, you will always rejoice and be filled with the love of God and always retain a remission of your sins. And if you stay in remission, you will be healed, cured, and changed!”(McKay, “A Mighty Change,” p. 29).

The complete and lifelong mighty change of heart is a process over time, and not a one time point in time. This is of the doctrine and principles of the gospel of Jesus Christ and not a "LDS" belief. While the initial conversion of an individual is often quite a mighty one time event, it is supposed to be an ongoing, lifelong process of enduring to the end. Alma 5:6-31 The Lamanites that received that initial purification they asked for and received, still had to abide by the doctrine and prinicple of enduring to the end. Alma 53:13-15. They were tempted to break the oath they had made to the Lord, but they heeded the word of their Priesthood leaders, and saved their souls from damnation of breaking their oath to the Lord. 3 Nephi 18:15 warns us that the process must be a lifelong event or series of events, or we will lose our promise as King David and so many others who undoubtedly had a mighty change of heart toward God yet did not endure to the end.

It certainly is LDS belief that, “a mighty change of heart is a process over time, not a point in time.” But I’m not sure why we think that. All of our scriptural examples of those receiving forgiveness of sins–being born again, changed, redeemed, are events. Even in this example, which is one of the most detailed accounts, the people said, “the Spirit of the Lord has wrought a mighty change in us”. That’s past tense, not a goal they hope to earn through their future ministering, but something already done by Christ. And then in verses 13-16 Benjamin states the difference this forgiveness and change will make in their lives. Their hearts were changed at a “point in time” –the exact point when they felt the fear of the Lord, pleaded for mercy and forgiveness, and asked that their hearts be “purified.” They immediately received what they had asked for. This is also what happened with Enos, and Alma, and Lamoni, and Lamoni’s father, and the wicked Lamanites in Helaman 5. And yet we cling to the process theory. Maybe if we don’t believe it can happen for us, it won’t.