Come, Follow Me for Individuals and Families: “A Light … That Can Never Be Darkened”, Mosiah 11-17 | Meridian Magazine 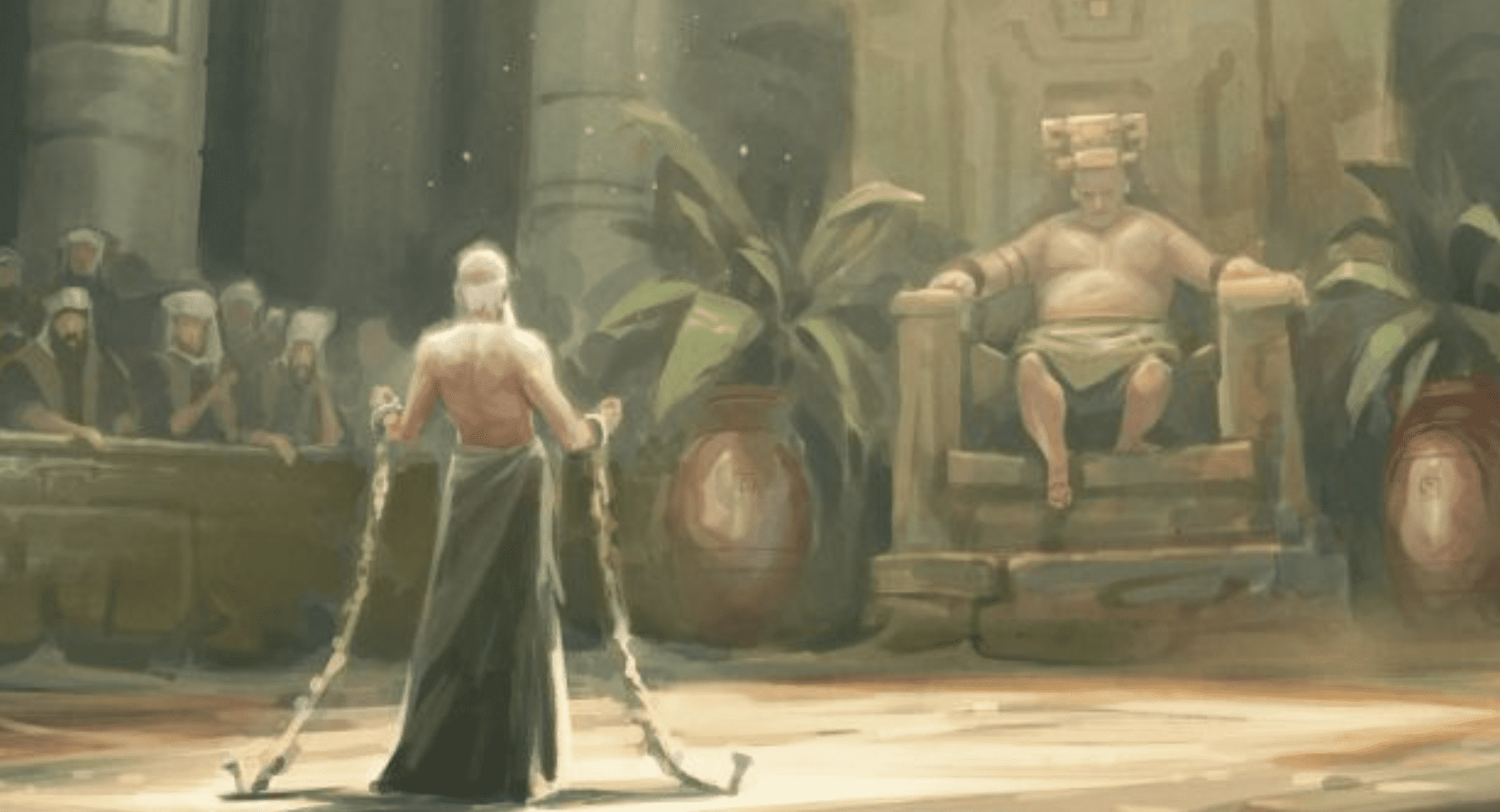 Come, Follow Me for Individuals and Families: “A Light … That Can Never Be Darkened”, Mosiah 11-17

Our story begins with a branch of people who have broken off from the Nephites at Zarahemla and have just crowned a new King.

We don’t hear much about Noah prior to his coronation. For all we know he was a half-decent young man. In any case he had impressed his father Zeniff enough to be chosen from among his brothers to receive the crown.

What we do know is that it didn’t take long before the power Noah received had gone to his head. He, like many who have faced that temptation of great power before, erroneously determined that “whatever he did was right” and “walked after the desires of his own heart.”

What followed was a quick descent into a mire of dystopian depravity as he proceeded to dismiss any naysayers and to surround himself with friends who would tell him exactly what he wanted to hear.

The less he worked, the more his people had to leading to heavy taxation. As the peace and solace of a solid spiritual foundation departed from him, he filled that gap with large and expensive structures and a false sense of security and permanence.

Then adding to the financial burdens, he brought upon his kingdom, he had the gall to use the Church and priesthood to lend a semblance of credibility to his morally bankrupt rule.

As we read this story of a precipitous decline over a few short years, we thought about three lessons that we thought we could learn from King Noah’s rule.

We remembered reading Jacob chapter 2 not that long ago where the Nephites had been warned against the very errors Noah had now made the pillars of his reign (pride and lasciviousness). Going back a few more pages we found that King Noah had followed Nephi’s description of the Great and Abominable Church to the letter (1 Nephi 13:7-9).

From this we pondered the power of learning from the scriptures. We wondered whether these people had brought these words with them in the wilderness and if so what had kept them from learning from them and using them as a reminder and wakeup call?

We talked about how Noah chose as his close friends, people who would agree with whatever he decided to do. We talked about how lazy the King and His Priests became as they sought only their own immediate gratification and how they all pulled each other down, like crabs in a pot, making it hard for any of them to change.

President Nelson’s invitation to “Hear Him”, requires this kind of open heart and mind to be in a place to receive truth even when it means making changes or doing difficult things.

What About the Regular People?

King Noah and his priests certainly set an awful example and set in motion a cultural norm that was destined for bondage.

This led us to question, what happened to the regular people citizens and what could have been done differently? From the record it doesn’t appear that too many voices were raised as society as a whole started to follow the King’s lead. It may not have been to the same extent, but somehow the people were lulled into going along with whatever entertainment, drunkeness and lying words their rulers doled out, failing to take responsibility for their own actions and lives.

You can just see someone saying, “The king and priests say it’s OK, in fact they’ve made it the law. Who am I to stand against it and speak up?”

We talked about how this is the very way any of us lose our freedom, trading it gradually, almost unnoticeably at first, for a chance to be entertained, safe, unchallenged and before we know what’s happened our inaction has allowed us and those around us to lose their way.

Thankfully God saw fit to send a messenger who would stand up, as a light in a very dark place, and say what needed to be said, whether those present wanted to hear it or not.

Abinadi’s life stands in stark contrast to Noah’s reign. Here was a man who had put God first in his life, who had learned to put off the appetites of immediacy, to enjoy the feasts of wisdom and knowledge that come of keeping the commandments.

Arraigned before the King and his priests, after prophesying of the unrepentant King’s demise, the court’s initial plan was to make a sport of the prophet through their sophistry and worldly wisdom.

Finding this ruse ineffective one of the priests turns to the scriptures and quotes the words of Isaiah. Apparently Abinadi’s words stood concerning death, bondage and destruction grated upon their ears and they wondered why he couldn’t be more like the prophet described by Isaiah who preached good tidings of peace, salvation, joy and comfort.

Of course, the comfort the priests had in mind was more that of idleness and their peace that of being told what they wished to hear.

This led to a discussion of what real vs. false kinds of peace, joy and comfort look like.

The Law and the Lamb

Presented with these introductory words of Isaiah, Abinadi proceeded to offer one of the most eloquent and moving sermons on the Messiah in all of scripture.

Abinadi begins his discourse teaching of the Law of Moses and the Ten Commandments, chastising the priests and King for their hypocrisy in teaching the law without making the slightest effort to live it and calling upon them to repent.

One might think that leaving the priests with the Law of Moses and a firm reproach might have sufficed, but Abinadi didn’t stop there.

He went on to explain the ultimate aim of the law, the true meaning of Isaiah’s words and the reality of the Savior Jesus Christ’s mission and atonement.

Continuing to quote the next portion of Isaiah, Abinadi expounds upon the nature of the atonement how:

“All we like sheep, have gone astray; we have turned every one to his own way; and the Lord hath laid upon him the iniquities of us all.” (Mosiah 14:6)

Abinadi describes all the travails of the lamb who would fulfill the law, his will swallowed up in that of his Father, to bring salvation to all mankind.

“Having ascended into heaven, having the bowels of mercy; being filled with compassion towards the children of men; standing betwixt them and justice; having broken the bands of death, taken upon himself their iniquity and their transgressions, having redeemed them, and satisfied the demands of justice.” (Mosiah 15:9)

He concludes with the promises of joy, hope and peace to those willing to hear the words of the prophets and receive Christ through repentance and covenant. He leaves the king and priests with the warning for those who:

These promises were the hope of a second chance, freely offered, pre-paid in full and provided with the greatest love possible.

Reading these words together we could not help but be moved in our hearts. We pondered just how much power there is in remembering the Savior’s difficulties and sufferings when faced with our own mortal challenges.

The Power to Change

The final portion of this story contains the reactions to Abinadi’s words.

It begs the question, when presented with light and truth, how do we receive and respond to the voice of the Good Shepherd?

For Alma, the decision to acknowledge the truth of Abinadi’s words and to speak up in his defense cannot have been easy. Anytime you have a close-knit group supporting one another in doing the wrong thing, there is a tremendous amount of peer pressure to keep everyone in line.

Even King Noah, the one supposedly in charge, lacked the courage to follow through with a decision to release Abinadi when the priests, he had surrounded himself with, gave him a hard time about it.

Alma though had opened his ears to hear a different voice.

It was no longer the voice telling him that he could do whatever he felt like and ignore any consequences. This was a quieter yet piercing voice speaking directly to his soul. It was a voice which told him how very much he needed to change, how much he was loved by his Father in Heaven, how incredible a gift he had been offered in a the power to repent, live differently and seek and find the real and lasting joy, peace and hope Isaiah had spoken of through the sacrifice of God’s own son.

Heeding that voice, Alma found the courage and strength to lay down his old life, to escape the King’s wrath, and to take up a new life as a disciple of Jesus Christ, sharing all he had learned from Abinadi to those willing to hear him.

What a blessing to have this record and these words, to discover for ourselves this light of Christ that can never be darkened so long as we give ear to His words and open our minds and hearts to receive them.