Come Follow Me for Families: They “Never Did Fall Away”, Alma 23–29 | Meridian Magazine 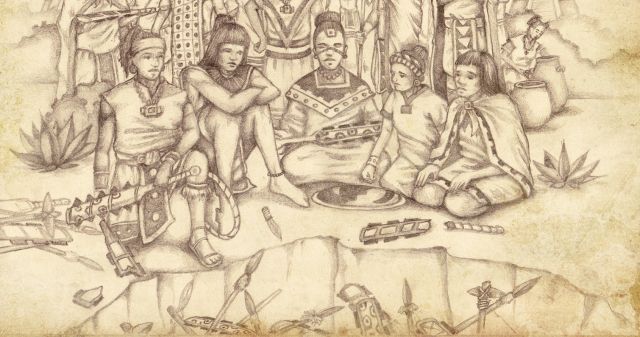 Come Follow Me for Families: They “Never Did Fall Away”, Alma 23–29

The Light of Conversion

This week we are given a wonderful tale of contrast and chiaroscuro, light and darkness, great sorrows and suffering and joy beyond our comprehension.

In short, a tale of mortal life through the Gospel lens.

Our story begins with the king of a great nation with a deep warrior culture where “might makes right” and where you live or die by the strength of your arm. This great king, father to Lamoni, is in a state of perplexion as everything he has learned, lived for and founded his kingdom upon is called into question one day when a man, whose arm proved stronger than his own, then showed him mercy.

When the missionary Aaron arrives at the king’s court, Aaron is asked to explain this entirely different paradigm of life.

“from the creation of Adam, laying the fall of man before him, and their carnal state and also the plan of redemption, which was prepared from the foundation of the world, through Christ, for all whosoever would believe on his name.

And since man had fallen he could not merit anything of himself; but the sufferings and death of Christ atone for their sins, through faith and repentance, and so forth; and that he breaketh the bands of death, that the grave shall have no victory, and that the sting of death should be swallowed up in the hopes of glory;” (Alma 22:13-14)

As he speaks, the king’s heart begins to undergo a seismic shift.

He sees clearly, perhaps for the first time, the darkness within himself and, at the same time, he desires more than he ever the peace, the relief and hope that can only come through Christ. His desire is so strong that all the earthly power and the kingdom he has built, seem insignificant by comparison.

Pleading in prayer, the full weight of this contrast between a life lived entirely without God to this new state of complete forgiveness, cleansing and the joy of feeling the spirit of God fill his soul for the first time is is so powerful that he faints for joy.

For all those who have experienced the joy of conversion for themselves or sharing in this experience with a new convert as a missionary, it is difficult to describe sufficiently in words the depth and breadth and magnitude of just how much you feel.

The Joy of Covenant Keeping

Last year, the family had the opportunity of returning to Adam’s father’s mission field in Elche, Spain.

Some 40 years earlier Elder Steven Timothy and his companion had opened the area for missionary work. One day there they met three teenage boys on their motorbikes and shared with them the truths of the restored gospel. From a superficial view, those sixteen year-old young men seemed like unlikely candidates to be the start of the church in this area. Yet each embraced that message and together they experienced the joy of receiving the gospel fulness in their lives.

While Elder Timothy had passed on twenty years earlier, his joy was felt intensely as we returned to the area and embraced those same men and their families who, in the ensuing years, had become the backbone of the Lord’s work in that area; working to build a chapel and serving in various leadership capacities, the most recent of whom had just returned from a mission presidency assignment in Argentina.

This time together led us to reflect on the journey we make after conversion to honor our covenants, remain faithful and find ever deeper and greater sources of joy.

This was the experience of the Lamanite converts who, having received the gospel, embarked on the journey of complete transformation from a warrior culture to a covenant culture.

These covenants were not just tenuous resolutions to live a better life, easily forgotten in times of trial. These were commitments that went soul deep as they took upon themselves a new name and abandoned the traditions of centuries.

This was followed by the burial of those weapons that represented so much of their previous lives. We noted with interest that they didn’t just hide the weapons away, or put them under guard in case of great need. They buried them deep with the understanding that the life those weapons represented was now dead to them. Interestingly this is the very symbol of baptism – the burial of an old life and the rising to a new one in Christ.

What are we burying or leaving buried as we renew our covenants each week?

What are we looking forward to most in a life centered in Gospel covenants?

The Catalyst of Consecration

Having made such a covenant, it was not long before their determination was put to the test in the most dramatic fashion possible.

For a people once so steeped in the arts of war, to now willingly lay down their lives was proof of complete consecration.

As awful as that massacre was, the mettle and fierce faith of those who chose non-violence by covenant, even at the cost of their own lives, was enough to pierce through the thick veils of darkness that had blinded their brethren and bring them to their knees asking for the same grace and hope they saw in the countenances of the people of Anti-Nephi-Lehi.

What a dramatic scene that must have been. What began as genocide was transformed into a crucible of from which was forged a deep and profound conversion both for those who faced the onslaught in faith as well as for those who threw down their weapons and joined their brethren.

From this experience we pondered upon what it means to turn our lives to God and put our trust completely in Him. From the experiences of these faithful saints and those missionaries who sought to share the Gospel light they had received, we find that a life lived in consecration is one where every small act of faith, every gift and every effort, no matter how insignificant, is magnified a hundred-fold and more by His light and power to the salvation of His children.

All Are Alike Unto God

As aggressions against the people of Anti-Nephi-Lehi continued, it became necessary to find a new home.

When the suggestion came to live among their former enemies the Nephites, it was initially rejected out of hand. “There’s no way”, they thought, “that after everything we as Lamanites have done to them and all that our people symbolize to yours, that they are going to just forgive us and receive us with open arms.”

What happened though at Jershon was one of the great miracles of the Gospel. The people not only received them joyfully, but they offered to defend these new converts with their very lives.

This change of heart and the ability to see former enemies as brothers and friends worth laying down your life for was the seed for a wonderful conversation about how we view those around us who are different than us.

I shared how when I, Eva, arrived in my Mission field in Manhattan, it was an electrifying experience. Here I was this super-green missionary swimming in this staggering sea of humanity unlike anything I had ever seen. It was an incredible melting pot where every nationality, race, tongue, religion, ideology and background one could imagine were gathered on this one island.

The diversity was beautiful and inspiring, but moreso because of the lens through which I came to see each individual. I learned to look for the light in every person I met. Not everyone wanted to talk or listen, plenty were hurried or worried or both, but even still there was not a soul that did not carry some semblance of this gift of light.

Focusing on the light of Christ in others I could see them more as he sees them, striving and seeking hope, understanding, fulfillment, good health and lasting happiness. For those willing to listen and receive more of this light in their lives, their grew between us a deep kinship and understanding as we came to know and appreciate how the Lord had acted in our lives to bless us in so many, many ways.

Much of the time when we see difference as darkness in those around us, it is merely the darkness within us being reflected outwardly as fear.

This was what those who tried to dissuade the sons of Mosiah from their mission to teach and save some few souls of what were seen as a wild, ferocious and blood-thirsty nation. But for those young men, they had seen the depths of darkness in their own souls and they had felt the power of redemption’s light chasing that darkness, changing, cleansing and healing them from within.

In Ammon’s own words:

“Who could have supposed that our God would have been so merciful as to have snatched us from our awful, sinful, and polluted state? Behold, we went forth even in wrath, with mighty threatenings to destroy his church.

Oh, my soul, almost as it were, fleeth at the thought. Behold, he did not exercise his justice upon us, but in his great mercy hath brought us over that everlasting gulf of death and misery, even to the salvation of our souls.”

They knew the full contrast between God’s light and the darkness which had very nearly destroyed them. They knew too that such light was both possible and powerful even in minds and hearts which had sat so long in darkness.

Their efforts bore fruit beyond what they had ever hoped, largely because they were empowered to look past the temporal differences that blinded so many to see the embers of hope in Christ that would come to light their whole souls.

Just the same when we focus on the light in those around us, in those hopes and dreams common to all mankind in the source of all light, Jesus Christ, all the periphery labels and superficial differences fade into a brotherhood of children of God.

Our study this week ends with Alma’s wishing that he had powers like the angel who had brought him to his senses, to shake the earth, to get everyone to pay attention and cease doing those things that would cause them sorrow.

He soon recants though, recognizing that the purpose of the gospel is not just to prevent sorrow and heartache in this life, but to proclaim the power of redemption, hope and healing through Christ and his atonement.

Likewise Mormon summarizing all that has taken place in these chapters recalls:

“Thus we see the great reason of sorrow, and also of rejoicing—sorrow because of death and destruction among men, and joy because of the light of Christ unto life.” (Alma 28:14)

Even so as we seek to carry light to the world and to the lives of those we care most deeply about, it is imperative that keep in mind that it is not our lot to wipe clean the canvas of darkness which forms the background of much of mortality.

Rather we are given the gift to help wipe away the tears of the brokenhearted, to alleviate suffering wherever we find it, to hold up Christ’s light in contrast to all the difficulties and adversities that weigh down the hearts of men, women and children everywhere so that they know where to look and how to find their way to a joy from which they might choose to never turn away.