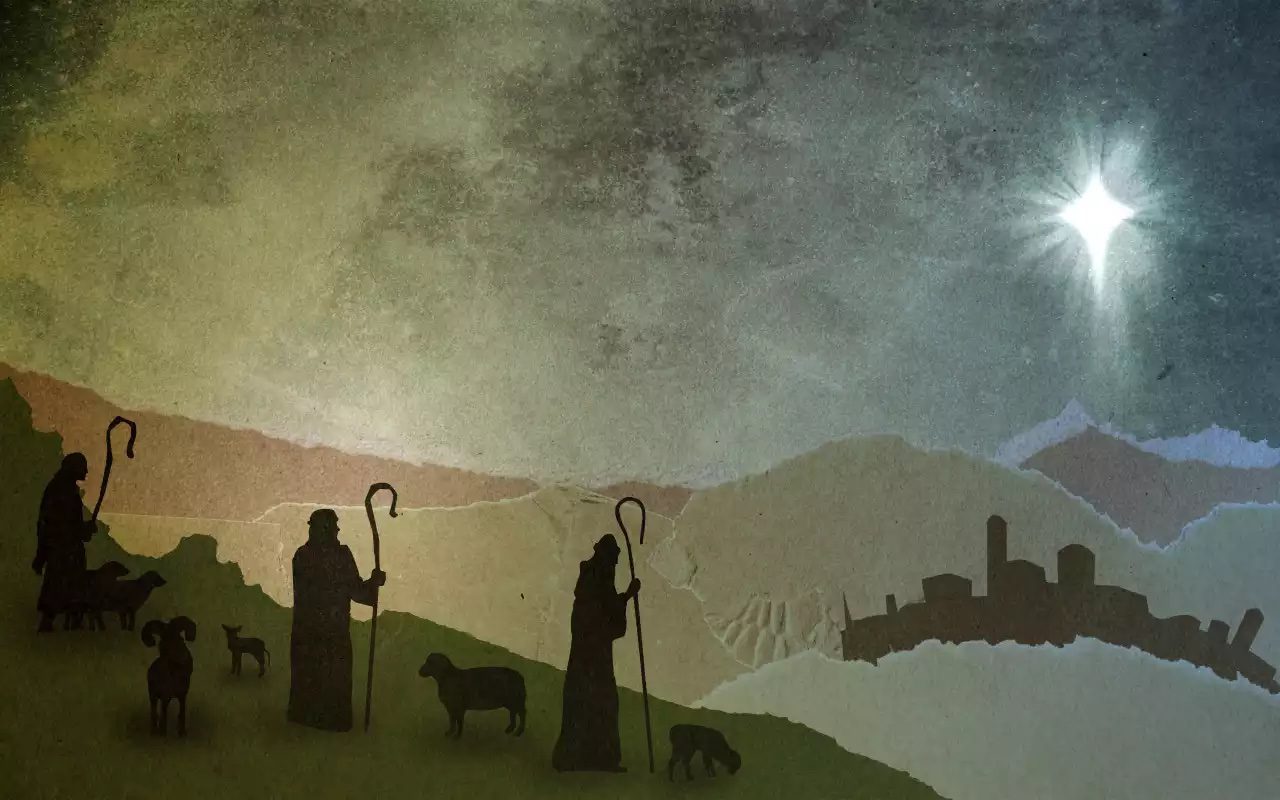 Christmas Eve through a Shepherd’s Eyes

Editor’s Note: Our friend and longtime Meridian writer Larry Barkdull passed away. To remember and honor him this is one of a series of his past articles that we are republishing regularly. Cover image via FPC Bristol.

The following comes from Larry’s book, “The Shepherd’s Song”.

What would it have been like to have been an eyewitness of the Savior’s birth? What would the shepherds have seen and experienced? Through the eyes of Joshua, a fictional shepherd in The Shepherd’s Song, this first-person narrative attempts to describe the extraordinary events that took place that first Christmas eve.

“Abruptly, I felt the earth move beneath me, as though it had suddenly become liquid. I steadied myself with a hand on the monument, while something akin to a tremor reverberated through the air. It hit me hard as if it had been the blast of a trumpet, but I heard no sound. Then, as unexpectedly as the quake had occurred, everything became absolutely still. Everything became as completely silent as one might experience deep in the belly of a cave. Nothing moved. No breeze, no far-off sound of sheep lowing, no noise of crickets or nightlife. Nothing. I was only aware of the rapid beating of my heart. I did not move; I did not breathe.

“Suddenly, as though it had been a spectacular strike of lightning, a blinding light burst forth from heaven and flooded Shepherds Field. Instantly, everything became brighter than midday. The light pierced the darkness of night like the first dazzling rays of morning, immediately eclipsing the light of the moon and the stars. It was unlike any other light that I had experienced. The light struck me with such force that I found myself lying on my back staring heavenward, unable to move, my strength having fled. The light felt amazingly tangible; it entered my body with the sensation of coming in from the cold and drinking warm fluid. It seemed to seep into every fiber of my soul until my entire body was warmed and enlightened by it. The light dispelled every particle of darkness in my being, and its warmth seemed to cleanse me; its presence seemed to wash away impurities, and its brightness burned out every doubt. If love were a substance then this light was love, for it filled me with the most profound assurance of celestial affection and enveloped me as with a holy embrace.

“As I gazed into the light, I suddenly beheld a glorious being standing above me-an angel from the presence of God. His countenance was brilliant. If it was possible, his body appeared brighter than the light that surrounded him. In fact, I could see that he was his own source of light; it radiated from him as though he were the sun. Nevertheless, his brilliance surpassed that of the sun, which in comparison would have appeared as a dim planet. Somehow I became aware that every particle of his body was vividly alive in a way that it could perceive and communicate truth. He was dressed in a robe of the most exquisite whiteness, a golden sash girded around the middle and tied on the side. His dress could have been that of a priest, except that his head was bare, as were his feet and hands. He wore a white beard the color of crystalline snow in the blazing sun, and his equally white hair flowed down over his shoulders in waves. His skin was not flesh colored, but radiant white and as clear as amber, almost transparent, and his eyes were as the flame of fire. In every way, the angel was a being of glorious light, as splendid a specimen of manhood as I had ever encountered.

“My first reaction was fear, not frightened fear, but holy fear, that sensation of profound reverence, awe and respect. The angel gently bent toward me and gestured with his hand, as would a friend. “Fear not,” he said, and when he did so, a thrill of hope shot through my body like lightening. His voice was mild and harmless, and yet it was commanding; although it was soft, it trumpeted a message of grand import. His words issued from his mouth like the sound of rushing water, making my voice sound coarse, awkward and primitive in comparison. Although the angel spoke in my language, I perceived his communication more in my mind, and that caused me to struggle to attune my ears to his message. I was suddenly impressed with divine proximity; God was near. The feeling carried with it complete awareness, concern, and remarkably, familiarity. I could not remember feeling so safe or so well known. I sensed that nothing could happen to me that heaven could not repair, that all would be well, no matter what happened.

“As I gazed into the light surrounding this holy being, the thought struck me that I was perceiving glory-the visible manifestation of divine presence, the ancient glory of the Lord that had always signaled his nearness. It was the Shekinah, the brilliant pillar of light that had rested upon the Holy of Holies in the Tabernacle, as our fathers had sojourned in the wilderness, following Moses to the Promised Land. This glory of the Lord had departed Israel hundreds of years ago in the days of Ezekiel because of wickedness, and ever since the people had mourned its loss. But now, tonight, the ancient glory had returned signaling the fact that the light of God was once again coming to the earth. Suddenly, I became aware that this glorious light was sustaining me in a manner that allowed me to behold the angel and endure his presence. Amazingly, as the light filled and washed over my body, I felt enlightened, and somehow I knew more. Principles that had evaded me now seemed clear, and questions that had haunted me now vanished. My mind was fully open; the light poured into it without resistance or restriction, filling me with intelligence and truth. Moreover, each of my senses was heightened and on fire: I could see more, hear more, smell more, feel more, and understand and love more.

“By the act of merely speaking, the angel’s presence seemed to search me, and I was suddenly aware of every misdeed that I had ever committed that had distanced me from my God. Now, more than ever, I yearned for reconciliation, and I had no desire to do or think evil. I only wanted to bask in this love and remain in the divine presence forever. No price seemed too great to pay. At the angel’s first words, I recognized that I was about to hear something singular. I glanced down upon the meadow below and noted that my father and the other shepherds were experiencing this same vision. When I turned back to behold the angel, he continued with his message: “Behold, I bring you good tidings of great joy, which shall be to all people. For unto you is born this day in the city of David, a Savior, which is Christ the Lord.”

“Could it be? The promised Savior, the Messiah, had been born today in Bethlehem? Since the world began, all the prophets had foretold this event, and now it had happened? But why tell us? We were but lowly shepherds, the poorest of society, a hiss and a byword among the people. Why not proclaim the news to the Jewish leaders of the venerable Sanhedrin? Why not tell them that the promise of the ages, the glory of Israel, had finally come to all people! Why not proclaim the news in the courts of emperors? The King of Kings is born today!”