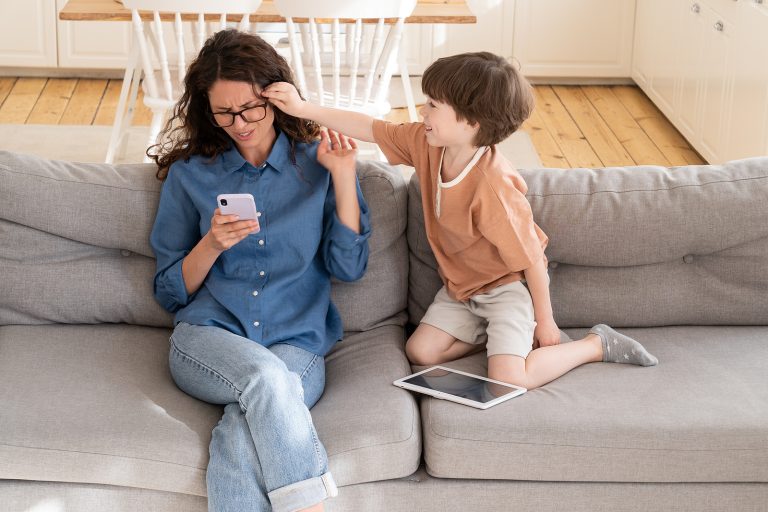 I think anyone who has had children has had a time when a child has embarrassed them. I know we have. My wife, Donna, had such an experience with one of our sons.

She was on a very important phone call where she was connected with a group of people reviewing theatre scripts. Some of these people were famous authors. Others were well-known actors. Donna felt a little inferior in the group. She had timidly given a few of her thoughts on the selections being considered, but she didn’t want to insert her suggestions into the meeting too much.

Everything was going well when our son, who was only about five, came to her.

Donna covered the mouthpiece of the phone. “Honey, Mommy is on a very important phone call right now. Could it wait until later?”

Our little son nodded and went on his way. About five minutes later, he came back. “Mommy, it’s later. Do you want to know what I learned now?”

Once more, Donna covered the receiver. “Mommy is going to be a little bit longer. But I promise you can show me the minute I’m done.”

He left and was gone only a few minutes this time before he was back. Since she said she would let him show her what he had learned when she finished, he impatiently waited. He just stared at her, sighing heavily now and then.

Finally, Donna turned to him to signal that they were finishing up the phone call, and she would be done in just a minute. But there were two problems with that. She couldn’t signal to him and cover the phone at the same time, and he took the signal to mean that she was ready for his demonstration.

With that, he let out a belch that just about shook the house and would have made a tugboat horn feel inferior. Suddenly, everyone on the phone call went completely silent. Finally, an older lady said, “Well, I guess someone feels better.”

Donna was sure they must have thought it was her, so she tried to explain, but it was hard for anyone to believe that came from a five-year-old.

The next week, the group was conducting a conference call to finalize the selection. Donna made sure the young children were fed and had lots of toys to play with. She hoped that would keep them busy so there wouldn’t be a repeat of the previous week’s episode.

When the conference call came, Donna sat down at the bottom of the stairs. This week there were lots of questions for her. She had the most expertise in musical theatre, and the others wanted to know her opinion on some musical options. She was deep into the conversation when she felt something brush against her face. She turned, and there, dangling by her, was a snake.

She let out a scream that could have wakened Rip Van Winkle from his slumber.

“Mommy,” our little boy said, “I found the toy snake.”

As Donna sat there panting from the fright she had received, there were lots of voices on the phone. They were asking if she was all right. After she explained what had happened, the same lady that had the sarcastic comment the week before said, “Well, I am now officially deaf.”

“Oh, come on,” someone else replied. “Haven’t you had a child do something like that to you?”

Donna was embarrassed. But that night, as we gathered for our family story and singing time, our little son cuddled up in his mother’s lap.

She smiled. “All the embarrassment and scares in the world are worth it for this.”

Oh, yes, those of us with children have all experienced moments of embarrassment, and not just on the telephone. I remember one evening when the missionaries came for dinner and my young daughter burst forth with the exclamation that the salad bowl we were serving from was our "barf bowl." Parenthood is NOT for the faint-hearted!

Yes, they are. Thank you.