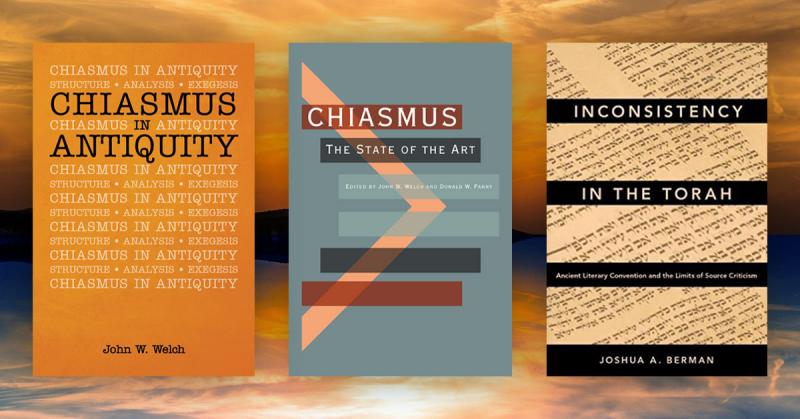 Strong interest in the study of chiasmus, especially in biblical texts and in the Book of Mormon, continues to abound. Indeed, so much is being regularly published on this subject that it takes a very watchful eye and lots of effort just to keep tabs on all that is coming out. Here are some interesting recent developments that strengthen the already substantial results of chiastic studies. Let me mention–in the opposite order from the picture above, of course–three publications that I am personally gratified to see now on bookshelves.

Of special interest is a book written by Dr. Joshua a Berman of Bar Ilan University in Israel and published by Oxford University Press in 2017. Entitled Inconsistency in the Torah: Ancient Literary Convention and the Limits of Source Criticism, this study reports results that emerged from an entire academic year of study by a residential group “composed of eight of the most distinguished names in Pentateuch criticism” (1). As is broadcast on this book’s back cover Benjamin D. Sommer’s endorsement praises this volume as it “puts forward what may be the most serious – and, to many in the field, disturbing — challenge in over a century to theories about the composition and dating of biblical texts. Biblical critics will have to reckon with Berman’s lucid and detailed investigations.” Sommer concludes, “Many scholars will want to disagree with Berman’s conclusions, but none can ignore them.“

Inconsistency in the Torah: Ancient Literary Convention and the Limits of Source Criticism Oxford University Press

One of Berman’s major challenges asks how typical source critics, who pursue the multiple authorship of biblical passages, will be able to account for the presence of extended chiastic structures in those passages, when “the structure emerges only when the two hypothesized sources are read in the form of the received [Hebrew] text” (262).

Starting on page 260, Berman revisits and refines Gordon Wenham’s previously proposed chiastic structure of over a dozen matched elements in the Flood Narrative in Genesis 6-9. That text that is usually thought to have derived from multiple authors–partly from the hypothesized Priestly version of this story, and partly from other authors who contributed to the non-Priestly material. The chiastic structural unity of this pericope, however, complicates the multiple-authored view.

Thus, Berman insists that “the question of chiasmus” could and should “reshape thinking about the compositional growth of texts of the Torah,” and this is because, “All agree today that chiasm is a feature of ancient Near Eastern literature and of the Hebrew Bible” (276). The only authority cited behind that unanimous consensus is none other than John W. Welch, ed., Chiasmus in Antiquity: Structures, Analyses, Exegesis (Hildesheim, Germany: Gerstenberg, 1981), (276 n. 17). Berman thus highly recommends that “A thoroughgoing survey of chiasmus in the cognate literature of the ancient Near East could offer us stronger comparative controls through which we could better determine the employ of chiasmus within biblical narrative” (277). Who would have thought this until just recently?

Coupled with Professor Berman’s call for broader and more rigorous chiastic analysis, two major releases are imminent this summer: Just off the press is the volume that has grown out of the papers presented in 2017 at the Chiasmus Jubilee, held at Brigham Young University, marking the fiftieth anniversary of the discovery of chiasmus in the Book of Mormon by John W. Welch, on August 16, 1967. This remarkable new 360-page volume, Chiasmus: The State of the Art, has been edited by John W. Welch and Donald W. Parry, both very well-known names in this field. This book is being co-published by BYU Studies and Book of Mormon Central (ISBN 978-1-942161-78-3) as a supplemental issue of BYU Studies Quarterly, included for all subscribers, as well as a scholarly monograph available through Book of Mormon Central.

Chiasmus: The State of the Art BYU Studies

This volume includes fifteen major studies by such experienced authors as Gary A. Rendsburg, Steven R. Scott, Bernard M. Levinson, Jonathan Burnside, David Rolph Seely, Noel B. Reynolds, Kerry Hull, and others. The contents include studies of Genesis, Leviticus, Deuteronomy, Jeremiah, the New Testament Gospels, and the epistle to the Hebrews, as well as the structuring of the book of 2 Nephi and several Mayan texts.

The chapter by editor Donald W. Parry compares the use of chiasmus in the Masoretic Hebrew text of Isaiah and that of the Great Isaiah Scroll from the Dead Sea. And the study by editor John W. Welch is entitled “Narrating Homicide Chiastically.” It discusses reasons why chiasmus is regularly used in homicide narratives, including Abimelech’s killing his brothers (Judges 9), Phinehas killing Zimri and Cozbi (Numbers 25), Ishmael killing Gedaliah (Jeremiah 40-42), Judith’s beheading of Holofernes (in the apocryphal book of Judith), and Nephi’s slaying of Laban (1 Nephi 3-4). Neal Rappleye, Director of Research at Book of Mormon Central, gives a strong assessment of the strengths and weaknesses of the criteria that have been used for evaluating proposed chiasms, along with a lengthy bibliography of publications that have made use of chiasmus in the last forty years.

Concurrent with the release of this new volume, a reprint of the 1981 volume, Chiasmus in Antiquity, makes that classic readily available again, through Wipf & Stock publishers, in Eugene, Oregon. Here is the link where it can be obtained. In order to benefit readers by making these two publications as inexpensive as possible, all royalties have been generously waived. And in addition, these last two books will also be available online, although having a printed copy of such graphically detailed reference works is often preferred.

For further updates and information, feel free to visit https://chiasmusresources.org/, where readers can find exhaustive indices, extensive bibliographies, explications of criteria, and recommended further readings. Thanks to many volunteers and workers, this website is operated by Book of Mormon Central and is completely open to the public.