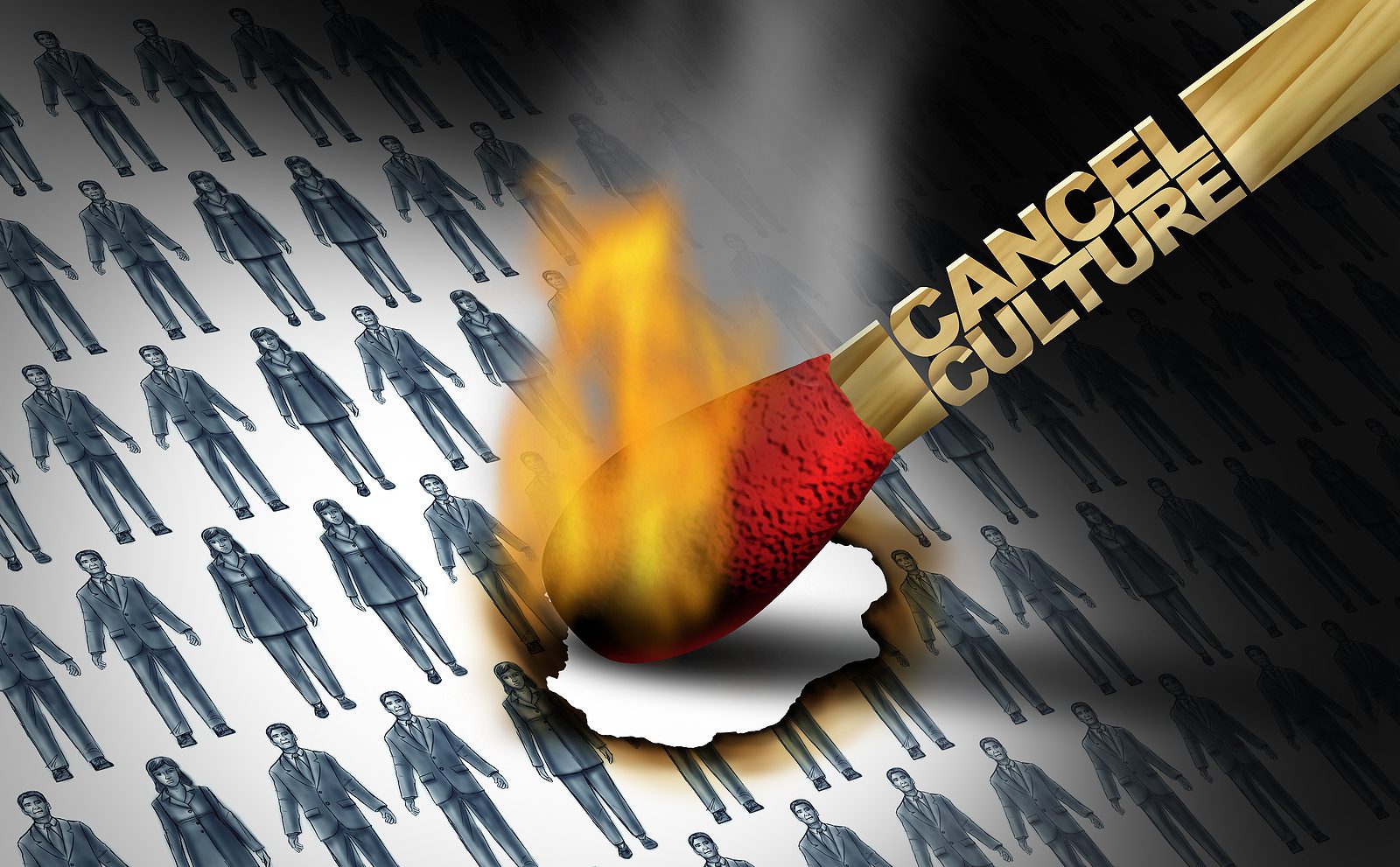 Canceling Cancel Culture – A Goal for 2021 We Can All Embrace

“How can you convince somebody that has never met you and the only thing they’ve ever seen of you is that three-second clip?” Mimi Groves was a freshman in high school when she posted a video celebrating her new driver’s permit, in which she used a racial slur: “I can drive.” Followed by the “n-word.” She posted it and promptly forgot about it. But one of her classmates, Jimmy Galligan, saw it and thought it could be useful in the future, so he saved it. Jimmy had suffered from classmates’ racist behavior, and wanted Mimi to understand the severity of the language she had used. Earlier this past year, in the midst of the George Floyd protests, he shared the three-year-old video on social media.

Groves was by this point a high school senior headed to the University of Tennessee when the video went viral. “At the time, I didn’t understand the severity of the word, or the history and context behind it because I was so young,” explained Groves. When Mimi made that video, she was mimicking the charged language of the music so popular among high schoolers. She adds, “It honestly disgusts me that those words would come out of my mouth.”  Outrage followed: alumni, students, and donors, among others, demanded that the University of Tennessee revoke its offer, and Groves withdrew under pressure. Jimmy Galligan had taught his lesson. Mimi was “canceled.”

The public prosecution of “thoughtcrime”

Cancel Culture uses social media to shame individuals and eliminate support for public figures and companies after they have done or said something considered objectionable or offensive. Once reserved for high-profile individuals, the practice has spread to include everyday people. Canceling’s greatest “benefit” is as an intimidation tactic to silence heterodox thought on issues such as gender identity and conservative politics. Once upon a time, stifling speech through fear and harassment would have been considered un-American. Not so much today. Consider the following high-profile examples:

In the past, bullying would have been considered an underhanded means of forcing compliance. Today there are actually those who frame cancel culture as a positive method to “reduce perceived harm to an individual or demographic, thereby creating social change.” One Scholastic article examined the issue from the perspectives of two high school students. One student enthusiastically advocated for canceling as an effective tool in combatting social injustice, especially in the school setting. “Offensive behavior will be condemned by students and administrators alike.”

On the other hand, the student that spoke out against cancel culture objected to the impact it could have on a person’s ability to redeem herself – “How can you apologize or show that you understand what you did wrong if you’ve been blocked on everyone’s social media and no one will talk to you anymore?” This is precisely the situation in which Mimi Groves finds herself. She cannot erase the thoughtlessly offensive use of a slur at the age of 15. The University of Tennessee certainly didn’t consider the possibility that Mimi’s imitation of the prevailing culture of the popular music she listened to might have been a case of immature, adolescent behavior, not racial malice. Galligan, with whom Groves had been friendly in school, could have had a meaningful, private talk with the popular cheerleader about hurtful speech. But he didn’t. Instead, he chose, years later, to make her a scapegoat for the racism and pain he experienced as a youth. Such a lost opportunity for them both.

Scholastic’s “anti” student rightfully identified cancel culture for what it is – public condemnation without context or humanity. But lost in the debate over the pros and cons of cancel culture is the foregone conclusion that anyone expressing an “offensive” opinion is by definition wrong. Society does not just cancel youthful indiscretions or outdated opinions. It cancels in order to stamp out the arguments of those opposed to the reordering of society by cultural elites. Proponents know the power of cancel culture to effect social change because it encourages self-censorship by you and me. We just stop sharing our thoughts out of fear. And what happens then?

Overcoming the conspiracy of fear and silence

Author Robert Henderson argues that when people are afraid to speak their minds, they begin to lie about what they do believe, which, Henderson points out, was common in Communist circles. Soon “honesty becomes unfashionable,” and people begin to “operate under the assumption that others hold certain opinions, which, in fact, they do not.” In the end, Henderson contends, as “individuals lose jobs or prominence because of things that they have said in the past, we will all become more adept at expressing falsehoods. It is likely that such a system will select for individuals predisposed to being comfortable with deception. Over time, only liars will speak openly.”

In a 1999 address at Harvard Law School, the late Charlton Heston described what we are experiencing as a “new McCarthyism.” He said, “I believe that we are again engaged in a great civil war, a cultural war that’s about to hijack your birthright to think and say what lives in your heart… Now, what does all of this mean? Among other things, it means that telling us what to think has evolved into telling us what to say, so telling us what to do can’t be far behind.”

Heston also gave us the antidote to this conspiracy of silence – a willingness to “disavow cultural correctness with massive disobedience of rogue authority, social directives, and onerous laws that weaken personal freedom.” That means speaking up and taking action – in civil and peaceful ways – when we see or hear that which is harmful. It is risky, and it takes courage, but it is the only way for us to resist this tyranny of political correctness. Heston reminded his Harvard audience, “If you talk about race, it does not make you a racist. If you see distinctions between the genders, it does not make you sexist. If you think critically about a denomination, it…does not make you anti-religion. If you accept but don’t celebrate homosexuality, it does not make you a homophobe.” He admonished his listeners to “re-connect…with your own sense of liberty, your own freedom of thought, your own compass for what is right,” and urged them to be unafraid. “If Americans believed in political correctness, we’d still be King George’s boys—subjects bound to the British crown.”

It has been said that “the only thing necessary for the triumph of evil is for good men to do nothing.” We begin a new year with new possibilities. If fear of being canceled has constrained you in the past, let 2021 be the year you find your courage, make your voice heard, and defy the modern-day McCarthyites who would silence you. Remember the great heritage of bravery that is ours. Speak up about the important issues that impact our society and our families and speak out against this assault on decency and freedom of thought.

excellent article, I have heard some interesting and maybe almost horrifiying stories recently about people losing businesses or business opportunities or getting death threats or their family being threatened or scholarships being pulled because of political or social opinions they have voiced or in one case somebody found something in a high school yearbook from way back and posted it and it destroyed the individuals business. Cancel Culture/Political Correctness is most prominent right now with politics but it has a part that is very specific to religion, particularly to Christian religions which also includes the Church of Jesus Christ of Latter Day Saints, especially those who follow scriptural teachings on morality, especially marriage. A personal example, just a month or two ago a co-worker said, "come look at this". It was a policy announcement on the company's intranet site that said they would no longer be hiring from BYU because BYU did not have an LGBT+ policy that fit their company policy. There are quite a few BYU graduates, some pretty high up in my division, I had to wonder if any replied to this or they just let it go.This is a very large company, a multinational company who's work is mostly with the government, a direct violation of the 1st amendment, but people are scared for their jobs and the Cancel Culture know this and they wield tremendous influence in corporate America right now. Like one of my co-workers said one day, it was corporate America that killed the Boy Scouts.There is also a Cancel Culture specific to the LDS church, there is a concerted effort (guess you could say renewed) that has been going on for a couple of years now, aided by the internet, it seeks to discredit Joseph Smith and some other leaders of the church, notably Brigham Young, Spencer W. Kimball, Ezra Taft Benson, Bruce R. McKonkie and a few others. There is a reason the leaders of the church have been emphasizing strong personal testimonies for a some years now and encouraging family and home study and President Nelson emphasizing personal revelation and the church posting essays etc. We need to diligently and correctly study it all out.

Cancel culture is fundamentally about condemning someone because of behaviors “they” consider unforgiveable or unacceptable. This has been going on forever but now has a catchy name to make it seem new and relevant. Think of the widow who spends her life hating the drunk driver who killed her spouse. The child who forever hates his alcoholic parent. I hope that those who believe in cancelling others will one day come to know Jesus Christ and how He can set us free-with forgiveness- through a kind and loving heart. Because He has forgiven us of all our wrongs, we cannot, rightfully, harbor an unforgiving heart against anyone. It’s helpful to remember that everyone is imperfect. The cancel culture is Satan's work. It is mean, unforgiving, and full of hate.